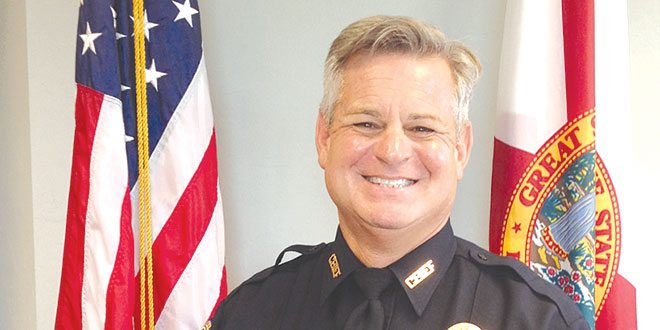 It was late afternoon when the 911 call came in. A man reported that his 81-year-old wife — Eileen Stuart — and her blue floatation device had been swept out of Caxambus Pass by a swift moving current.

On vacation, the Hernando, FL, couple had been floating together just off the beach nearly an hour before, but as the tide began running out of the pass, she was not able to make it back to the beach. Onlookers kept watch from the beach, and 45 minutes later, the woman was nearly half a mile out in the Gulf of Mexico.

Acting Marco Island Police Chief Al Schettino was in his car when he heard the call come through, and his first instinct was to head to the dock to meet with marine officer Sgt. Brian Hood. After all, Schettino served as an MIPD marine officer at one time. The two officers launched the department’s Donzi and sped in the direction of Caxambus Pass.

While Schettino and Hood were among the first responders, they were not alone. The Marco Island Fire-Rescue Department also deployed its new fire-rescue boat, and MIPD officers dispatched to the beach to act as spotters. The Collier County Sheriff’s Office and U.S. Coast Guard also were alerted. A team effort to rescue Stuart ensued.

“It was very important for us to work together and make this happen,” Schettino explains. “The raft was a blue color, and it blended in with the water. Once we spotted her, she was waving and screaming, and pulled along side her. We got ahold of her, but her (floatation device) 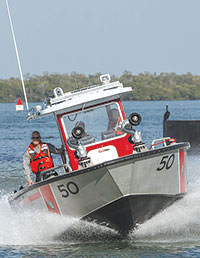 was very flimsy and it was a little rough out at this point. It was going to be very difficult for us to get her on the Donzi. We were going to have to pull her over the side of the boat using a temporary ladder.”

Enter MIFRD’s new fire-rescue boat with its back platform, which was specifically designed to help easily load people onto the boat from the water. The MIFRD arrived on the scene just minutes after the MIPD vessel, and the two departments were able to simply sit Stuart of the fire-rescue boat’s back platform.

“Chief Murphy pushed so hard for this boat because of situations just like this,” says Schettino. “The fire-rescue boat easily swum around, and we were able to sit her on the platform. It was a great cooperative effort by both departments…That boat was perfect.”

“Thank God we found her,” he adds.

To avoid dangerous situations like the one Stuart found herself in, Schettino encourages everyone to wear a personal floatation device while in the water and to carry a whistle or sound producing device, especially if you plan on going outside of an immediate swim area. He also strongly recommends that people swimming in the Gulf or just floating in the water always do so with a partner. Never do these types of activities alone. Finally, he urges people to make sure they know what the tides and currents are doing before diving in.

“This type of thing happens a lot, especially with people on paddle boards,” Schettino says. “They get out in the water and don’t realize that they have to go against the current or tide to get back in. Make sure you understand your capabilities and how the water is moving.”