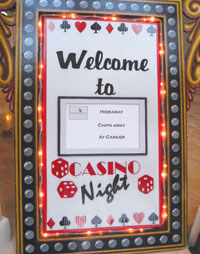 In the high-stakes game of fighting cancer, Hideaway Beach Club and the Ameri-can Cancer Society’s Marco Island Unit make a great team. For the last 10 years, Bill Dean and his Hideaway Beach Chips Away at Cancer committee have held fundraising events for ACS’s Relay for Life, and this year’s Las Vegas-style “Casino Night” brought in $113,000 for ACS.

The event’s 155 attendees bought event ticket sales, sponsorships, silent auction items and made various donations during the evening at Hideaway Beach Club. Sponsorships alone raked in about $77,000, and one silent auction item — a la-dies dinner for 10 — went for $8,000. Donations are still rolling in.

For Dean and his Hideaway crew, their work with ACS is very important and very personal. “Several of us have had cancer or have had a loved one who has,” he explains. “Everyone has been effected by this rotten disease.”

Inspired by his mother’s battle with cancer and his own years of raising money for charities, Dean began fundraising for ACS in the early 2000s with “Making Strides Against Cancer.” The sponsored walk had hundreds of Marco Island residents walking along the beach from Tigertail Beach to the Marco Island Mar-riott Beach Resort, raising thousands of dollars.

Over the years, the walk evolved and expanded into charity golf tournaments, si-lent auctions and car shows. The Hideaway committee developed the “Casino Night” idea and launched it last year. The committee’s various fundraising efforts in 2013 raised $130,300 for ACS.

“The committee is fantastic. It is a lot of work, and we have a lot fun doing it,” says Dean.

Last year, ACS-Marco Island raised more than $350,000 to support its mission both locally and nationally. Most of these funds were raised through the unit’s two main events: Relay for Life and the Imagination Ball. This year, the Imagination Ball will be held on Saturday, February 15, at the Marco Island Marriott, and Re-lay For Life is scheduled for April 12-13.

Still, Honig says, these events and the local unit’s fundraising efforts would not be successful without the support and action of groups like Hideaway Beach Chips Away at Cancer and local businesses like the Marriott Beach Resort, Bis-tro Soleil, the Island Country Club Foundation, Curves, Progressive Auto and CJs on the Bay. All of these have held events whose proceeds were donated to the ACS.

Honig adds,“We are very lucky to have so many individuals and businesses sup-port us as we aim to finish the fight.”