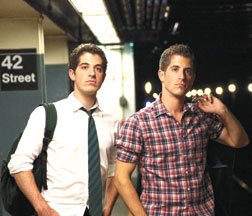 Will and Anthony Nunziata will be performing ‘A Night of Broadway’ at the House of Mozart’s, Thursday and Friday night, February 2nd and 3rd at 6:00 PM. Make reservations quickly, these performances will surely be sold out! Will & Anthony enchant their audiences during concerts singing fresh arrangements of classic standards, songs from the Golden Era of Broadway, and Italian music, along with their fun and improvised comedic interplay with each other and their audience.

Will and Anthony have performed across the nation and across the globe, including Avery Fisher Hall as part of the “Sondheim: The Birthday Concert” for the 80th birthday of Stephen Sondheim! The Nunziata brothers have been featured on Good Morning America, NBC and the Rachael Ray Show. Quotes from a few of their reviews include:

“Blessed with strong voices and leading man looks, Will & Anthony are exuberant and upbeat!” by The Wall Street Journal.

“They display an engagingly brassy professionalism!” by The New York Times. “The brothers play off each other in a way that Dean Martin and Frank Sinatra bounced off one another in those irreverent Rat-Pack days of another era.” by Theater Scene Magazine.

“Young, attractive, charming and funny, Will & Anthony put a fresh spin on the Classics!” by Playbill

This is your opportunity to enjoy the show in a quaint personal atmosphere. The House of Mozart, located in the Shops of Marco, will host the event. While enjoying the show, you will be served an elegant five course dinner planned and prepared by Chef Alfred and his wife Manuela Schnagel. Make your reservations today! Seating is limited. The House of Mozart is located at 151 South Barfield. Dinner and Show $65.00. (Beverages not included.)

Will and Anthony will be singing from the Broadway & American Songbooks including “Make Someone Happy,” “Smile,” “Get Happy/Happy Days,” “The Prayer,” and many more! They will be releasing their debut album nationwide a week after their Marco Island performances. Copies of this debut album will be available at the show. Call for reservations, House of Mozart, 239/ 642-5220.