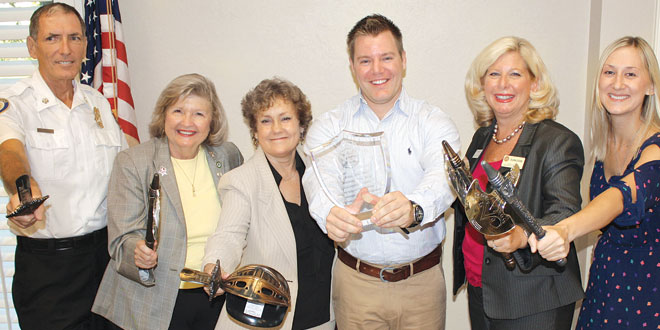 With a new year comes a new chance to honor members within the community for their acts of courage, bravery and compassion. Coastal Breeze News and the Marco Island Fire Rescue Foundation are now accepting nominations for the second annual Galahad Award.

What exactly IS the Galahad Award? Named for Sir Galahad, the most gallant and pure of King Arthur’s knights of the Round Table, Sir Galahad did not shy away from danger; he confronted it head on. He rescued those in trouble and was modest about what he accomplished. The award seeks to honor the embodiment of these characteristics through actions that benefit the Marco Island Fire Rescue Department.

Conceived out of the desire to honor the efforts of one particular individual, the Coastal Breeze and the Marco Island Fire Rescue Foundation began an annual tradition in 2012 that will continue to honor the heroic efforts of businesses, condominiums and individuals.

Joshua Erickson, a resident of Goodland, was the inaugural winner of the Galahad Award, presented to him on October 7, 2012 at an evening reception with leaders of the Marco area community at Mutual of Omaha Bank. Erickson, currently a Master Captain for Dreamlander Tours of Marco Island, selflessly contributed to the rescue of three individuals in the midst of recreational water-related emergencies on three separate occasions in 2012. Erickson aided a man with a neck injury along Marco’s beach, a young female who had become unconscious due to a near-drowning and a woman who crashed her wave runner into a mangrove island.

Do you know a person, business or condominium that has 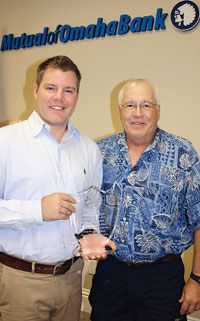 Joshua Erickson and his father John Erickson on the evening of the Inaugural Galahad Award reception.

gone above and beyond the call of duty pertaining to a fire or rescue situation? Nominate them today!

Nominees must demonstrate the following in their actions:

• Either PREVENTION or INTERVENTION: Did someone you know intervene during a disastrous situation while waiting for emergency help? Or maybe your business or condominium has updated their fire sprinklers or smoke alarms for prevention purposes?

• INITIATIVE: Taking action is always the first step. Whether it be before a problem exists or intervening during a crisis, willingness to spring into action can mean the difference between life and death.

• AWARENESS: Understanding one’s surroundings and what to do in a critical situation can be crucial. CPR and AED training and knowledge of local emergency response teams and healthcare centers play a major role in diverting disaster.

• COURAGE and BRAVERY: In an emergency situation, it takes a certain set of you-know-what to get involved. Overcoming fear and stepping up to lead in these types of events is something that not everyone is capable of.

The goal of the Galahad Award is to encourage conscientious behavior and actions regarding fire safety and emergency response conditions. The Marco Island community is full of individuals, businesses and condominiums that demonstrate this kind of positive stewardship. But it’s up to you to give them the credit they deserve.

Nominate the next recipient of the Galahad Award by sending a short description of how your choice demonstrated the above actions. Send your nominees to val@coastalbreezenews.com or to the Coastal Breeze headquarters at 1857 San Marco Road, Unit C-216, Marco Island, FL 34145. Galahad Award recipients will be chosen by the Marco Island Fire Rescue Foundation.