Academy Receives Donation from the Marriott 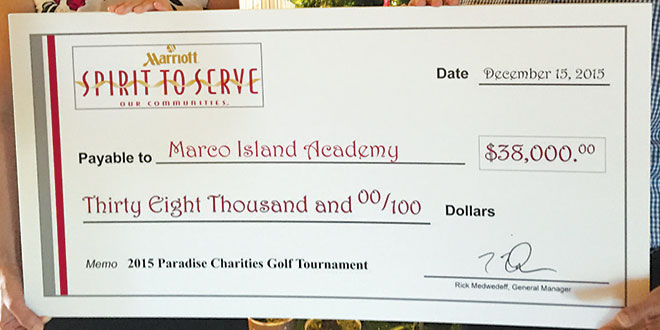 Rick Medwedeff, General Manager of the Marco Island Marriott Beach Resort, Golf Club and Spa, presented the Marco Island Academy with a check for a portion of the proceeds raised from a golf tournament, a total of $38,000. The school founder, Jane Watt, accepted the donation.

The Academy is a Charter High School whose mission is to provide a student-centered, well-rounded, interdisciplinary education while forming an integral partnership among students, teachers, parents and the community. The money will go towards the school’s ‘General Fund,’ which is critical to their operations, as they do not receive sufficient funds from the state.

charity groups through events such as golf tournaments, dinners and silent auctions. This year’s golf tournament, held on December 4th, brought out 112 players to raise money for a variety great causes in the community.

The Marriott is committed to investing in the quality of life in the community where its employees live and work. Through this active stewardship, the program, now in its sixth year, has raised more than $500,000 in donations to local charities with $110,000 being raised in 2015 alone.