A Week of Sunshine 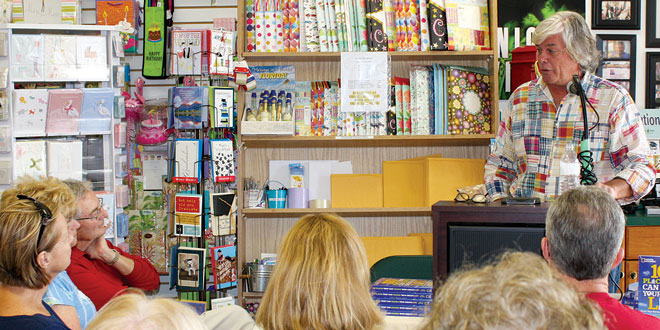 Sunshine Booksellers on Marco Island is known for its regular author book signing events. The week of March 25th was one of the busiest the store at 677 S. Collier Boulevard has seen thanks to three amazing authors who took the time to lecture, answer questions and sign autographs on three separate days.

The first author of the week was “National Geographic Travel” Editor Keith Bellows. His book, “100 Places That Can Change Your Child’s Life,” was especially popular on Marco as it was one of the destinations mentioned. Bellows, on a trip to the island, came across The Dolphin Explorer, a sight-seeing vessel which leaves out of the Marco Rose River Marina.

What makes The Dolphin Explorer so unique is that it is not only a tour to see dolphin, but it is also an ongoing study of the area’s dolphin population. The study finds, names and tracks dolphin that call the waters around Marco their home. Children and adults and adults alike are involved in the study as they help search for dolphin, both new and named. Every dolphin has a unique dorsal fin, like a fingerprint, which is how the dolphin are continuously identified. If a new dolphin is spotted, the guest who saw it first is given naming rights.

In his book, Bellows uncovers another 99 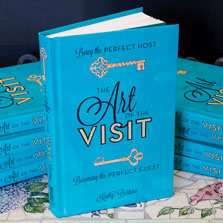 “The Art of the Visit” by Kathy Bertone gives tips for both host and guest.

places all over the world that can be both inspiring to young and old: from places like Machu Picchu or the Grand Canyon to experiences such as seeing the migration to Mexico of the monarch butterfly.

As unique as his book, Bellows was both engaging and entertaining.

Robin Cook arrived at Sunshine the next day; March 26th, to discuss his latest novel, “Nano.” As gracious as Bellows, Cook spoke for quite some time about the novel writing process. As a working physician, Cook began writing novels that “combined medical fact with fantasy to produce a succession of 28 New York Times bestsellers.”

When asked about his favorite part of the writing process, Cook explained that it had to, of course, be the travel – at least most of the time. “I like to take people to places they have never been before and really describe it – whether it be a surgical room or autopsy room or just a specific destination. I’ve been to just about all of the places I describe in my books.” Like Equatorial Guinea – a country Cook jokingly warned the crowd to never visit.

The worst part about the writing process? The writing, he answered with a laugh.

While numerous copies of Cook’s new novel, “Nano” played as a backdrop to his talk, the shelves at Sunshine hosted a bevy of 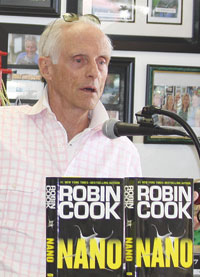 The refined and graceful Kathy Bertone came to Sunshine on March 28th to discuss her first book, “The Art of the Visit.” Living in Naples, Bertone found that, believe it or not, many of her friends and family wanted to come to sunny Florida for a visit. After a few disasters and many triumphs, Bertone came up with a step-by-step guide to be either the perfect host or the perfect guest.

When asked what to do about the old “guests are like fish” saying, Bertone was well-prepared in her response. “It was Benjamin Franklin who said that guests, like fish, start to stink after three days – so we attribute that saying to him. But there are many things you can do to avoid this and it depends on the perspective you are coming from – whether you are the host or the guest.”

Bertone discussed that as a guest, bringing a small gift upon arrival goes a long way. As a host, preparing a basket with all the toiletries and extras a guest may need will make them feel more comfortable because the basket avoids the need to ask where certain items may be. The book goes over how to share the cost of food, whether it be going out to dinner or stocking the refrigerator, how to create extra 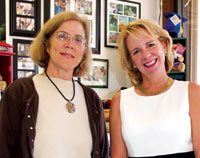 space in a smaller home to accommodate for guests and the idea of planning out activities ahead of time.

The audience of all women had many questions for Bertone, who went over, in-depth, how to politely make it through any situation.

Bertone was the epitome of grace, calm and sincerity as she spoke. Her book, “The Art of the Visit,” is visually stunning and full of tips that encompass all of the characteristics that Bertone embodies.

Before season ends, Sunshine Booksellers – the only privately owned bookstore in Collier County, by the way – has one more upcoming book signing. On Tuesday, April 9th at 4 PM, Jill Baguchinsky will be signing copies of “Spooky Girl,” a young adult novel published by the Penguin Group. Her book was awarded the 2011 Amazon Breakthrough Novel Award for Young Adult Fiction.

Jill’s success and visit will excite many locals as Jill grew up on Marco Island and attended Tommie Barfield school. Her parents still live on the island.

If you haven’t done so already, attend one of Sunshine’s book signings. They’re fun, informative and the authors as friendly and inviting as are the owners, Stuart and Theresa Unsworth.