A Week In Winter 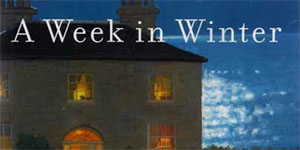 A Week In Winter By Maeve Binchy
Knopf, November 2012

The Irish speak English with a musical lilt, softening even the harshest words and syllables. The best Irish authors bring this magical musical lilt to their written word. In my opinion, Maeve Binchy is in that class of authors.

Some paint pictures with their words, but Maeve paints life with her words. The reader cannot just “see” her characters in her mind’s eye, but experiences life right along with the characters.  The soaring giddiness of falling in love, the deep delight of parental pride, the pathos of betrayal, the comfortable silences of long-married couples, the crushing grief of a loved one’s death, the regenerating spirit of genuine friendship, the seeming impossibility of just carrying on  – these are guaranteed in Maeve’s books. It’s why millions of us love her. We know every book will be packed with human frailty and strength, that there will be a happy ending despite all the travails and that we will feel better about our own lives.  Reading a Maeve Binchy book is like getting a lovely hug from your favorite auntie.

It was raining the day I read “A Week In Winter,” Maeve’s final book. The weather was a stark contrast to that of the day when I was introduced to Maeve Binchy through “A Circle of Friends,” reading it in full sunlight at the beach in New Smyrna Beach. It underscored to me, that in some way, I had come full circle with one of my favorite authors. I opened this final gift from Maeve, eager yet reluctant, knowing it would be the last journey into her world of Irish hamlets, villages and of course, Dublin.

“A Week In Winter” is set in tiny Stoneybridge, on the west coast of Ireland.   Geraldine “Chicky” Ryan is the protagonist, but as in all Binchy books, the “secondary” characters take over the story. Chicky’s nickname derived from her childhood job of feeding the chickens on the family farm. She brings disgrace upon the family when she leaves for New York City with visiting American, Walter Starr, only six weeks after meeting him at the knitting factory where she works in the office. Walter never marries her and in fact, slinks off to California after a few months. Chicky is determined not to go back to her judgmental parents and bleak tiny Stoneybridge. Her letters home have been novellas, fictionalized accounts of 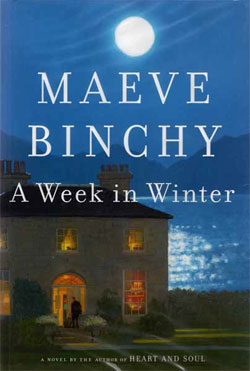 her wedding and life with Walter in America. Over the next two decades, she makes annual visits to Stoneybridge with colorful excuses to explain Walter’s absence. Eventually, she decides to return to her roots when the opportunity to renovate the old Sheedy place into a bed and breakfast presents itself. Chicky’s “widowhood” is explained by Walter’s fatal (fictional) car accident.

Once Chicky is back in Ireland, things really start to happen. The secondary characters we have already met, a few degrees of separation from Chicky, make their way to Stoneybridge or strengthen their ties to it. The tribulations and setbacks of getting Stone House ready for opening, including attracting guests, are all met. During Stone House’s renovation, Maeve weaves the back stories of the characters whose lives will intersect during this week in winter.

The guests include an American actor who believes he has disguised his identity, an engaged woman and her mother-in-law to be, a couple who won the week-long holiday as second place in a contest, a recently retired bitter school principal, a young Swede who loves music but is expected to take over the family accounting firm and a psychic librarian frightened of her “visions.” At the same time, we are kept abreast of what is going on with the Stoneybridge folk, even those now living in Dublin.

Predictable but delightful, Maeve weaves all these story threads together during this week in winter. Her diverse cast of characters has experienced bitterness, disappointment, disgrace, betrayal, doubt, and fear. Somehow, in this seemingly godforsaken remote part of Ireland, an old battered mansion has been the catalyst for their redemption, renewal, and rejuvenation. And most find their way back to courage, love, friendship and generosity.

As Maeve fans know, her latter books are full of recurring characters, and it’s comforting to learn that Brenda is still running Quentin’s, that familiar comfortable restaurant in Dublin. We catch glimpses of a few others familiar to us through Maeve’s previous books.

Some people say this isn’t Maeve’s best work. That’s a judgment best left to each reader. She delivers a great cast of interesting, credible personalities whose predicaments she resolves with trademark humor, warm-heartedness, and keen insight into human behavior. I found it an extremely satisfying read. From “Light A Penny Candle,” published in 1982, to “A Week In Winter,” published 30 years later, Maeve Binchy has been warming the literary world with her love letters to Ireland otherwise known as her novels. She will be missed.