A Tribute to Our Heroes 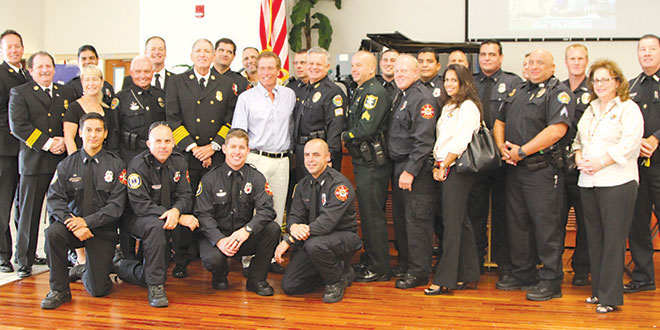 Marco Island’s first responders and city staff came together for the annual remembrance breakfast on September 11.

On Friday, September 11, the Marco Island Fire Rescue Foundation (MIFRF) held their annual remembrance breakfast at the San Marco Catholic Church Parish Hall. The event was meant to honor and remember the civilians and service people who lost their lives on that terrible day fourteen years ago. Dianna Dohm, president of MIFRF, began the ceremony by acknowledging the retired Marco Island firefighters as well as the first responders in attendance, stating that it is they “who put their life on the line everyday.”

Sgt. James Bogliole of the Lee County Sheriff’s Department gave the key address. Bogliole was living in New York City in 2001 and was a member of the NYPD when the 9/11 attacks occurred. On that day he responded to the collapse of the North Tower of the World

Firefighter/Engineer Steve Hagman with an actual piece of the World Trade Center destroyed on 9-11. PHOTOS BY SAMANTHA HUSTED AND VALERIE SIMON

Trade Center. His firsthand account was a powerful reminder of the heroism and personal sacrifices made by responders that day. Though his speech was short, the audience was moved by his experience.

Fire Marshal Ray Munyon then explained to those gathered the history of the ringing of the bells ceremony in the fire service. Before firefighters had access to technology like walkie-talkies, they would use the bells to send messages and relay information. Five rings, four times in a row signified that a firefighter had fallen. Firefighter Nick Macchiarolo proceeded to ring the bells in that manner in the memory of not only those lost on 9/11, but to all who have given their lives in the line of duty. 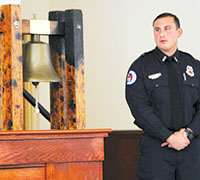 Firefighter Nick Macchiarolo had the honor of ringing the bell in memory of the fallen.

a piece of steel recovered from ground zero, a success five years in the making. After visiting the 9/11 Memorial in 2002, Hagman was inspired by the community of firefighters there that had bonded over the tragedy. It was then that he got the idea to apply for a piece of the recovered World Trade Center tower. Though he’s not sure which tower the artifact came from, its presence is powerful. It is Steve’s hope that it will bring Marco Island residents affected by the events of that day some closure. He unveiled it to the audience and plans to place it somewhere special, where the public has access. After the ceremony ended, those attending were invited to a closer look.

The breakfast concluded with the singing of “America the Beautiful,” by the San Marco Catholic Church choir.