A Tough Game Ahead For MIA Football 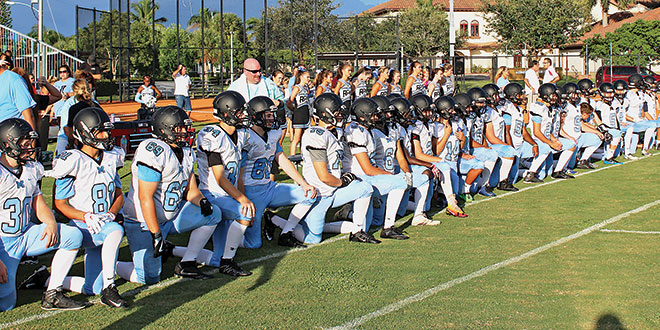 MIA football team is lined up and ready to go for its preseason game. Photos by Roger LaLonde

The Marco Island Academy (MIA) football team travels to Lake Highland Prep in Orlando for a 7 PM game on September 2.

Marco Island’s game with St. Petersburg- Shorecrest Prep on August 26 was canceled due to severe weather. Distance and a non-district game determined the game will not be made up.

The highly-touted 5A Highlanders won easily on August 26, downing Lake Weir, 36-19. The score was closer than the game as Lakeland used many subs in the fourth quarter, giving up 12 points, while the Highlanders scored three.

A year ago 2A MIA hosted Lake Highland, taking a 59-13 drubbing.

Tyler Gresham celebrates after scoring the winning touchdown. He was a standout on both sides of the ball as he scored three touchdowns and made key tackles.

Highland game also is a non-district contest. The Manta Rays first district game will be at Moore Haven at 7 PM on September 16.

“The team was looking forward to playing Shorecrest Prep and getting their second win going into the Lake Highland game,” he said.

“It will be a long day, including a four-hour bus ride for the game,” Coiro said.

“That doesn’t mean they won’t be ready. By then they will have gone over film many times on the Highlanders,” he added.

“They like to spread the ball around to all their athletes,” he

In a scrum-like pile, Marco Island comes up with a fumble by Gateway Charter. The defense held strong when they needed the big play.

The Highlanders are big up front on offense and defense.

“They have been cleaning up some bad habits with our line,” Coiro said. “We need to be more technically sound. To be successful we need to control the clock.”

The offense and defense stepped it up in their preseason game, downing Fort Myers-Gateway Charter 45-38 on August 19.

Coiro’s team is looking to shed its losing ways over its first four years. They did it in dramatic fashion as they rallied their way to victory in the fourth quarter. 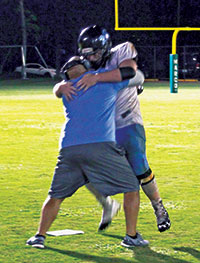 and made numerous plays on defense.

Many of the players came off the field in tears of joy.

Senior defensive lineman Kyle Ginther was one of the leaders who was emotionally spent. Ginther was on the Rays first football team four years ago.

He could barely speak through the tears as he said, “We have come so far.”

Gresham said what the coaching staff and teammates are thinking.

“This is a different program. This is not the same Marco team we used to be,” he said.

The Rays fought back from 12 and 16-point deficits

Vinnie Moller romps into the end zone for a score in MIA’s 45-38 win over Gateway Charter on Aug. 19.

the end zone for two points, cutting the lead to 12-8.

Gateway would score twice more, running its lead to 24-8 in the third quarter.

Did the Rays have what it takes to get back in the game was the question. The team lost four games in the final quarter a year ago.

the drive with an 8-yard run and Moller made good on the conversion to tie the game at 32. Gresham scored again minutes later giving the Rays the lead, but the two-point run failed, giving the Rays a perilous six-point lead.

With 4:33 left Gateway scored again. If its two-point conversion worked they would have the lead.

It didn’t. The Rays stood strong, stuffing the run to keep the score at 38 each.

Gateway could not get the ball across the goal for four extra-point conversions, costing them eight points.

Gateway tried an onside kick but Ginther gathered the ball in. With Moller and Gresham rotating

carries, with a 35-yarder by Moller, Gresham scored the go-ahead touchdown. Josh DaCruz kicked his first extra point as the team’s new kicker and the Rays took a 45-38 lead with 1:54 remaining.

Gateway went on a last-gasp drive but the defense stopped them.

Two straight plays the Rays defense swarmed the quarterback. On the last play it was Jackson O’Shea, Jay Cartwright and Brendan Howard meeting at the quarterback to end the game.

Coiro told his team after the game, “It’s about not giving up, being men and not lying down. You didn’t. All 11 hats ran to the football.”

While Lake Highland will be a battle, Coiro expects his team to give their all.