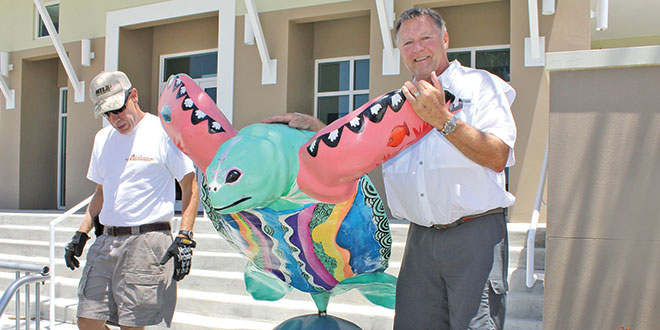 There’s a new-look turtle gracing the entrance to the Youth Development Center at the Marco Y, courtesy of charitable donor Steve Garske and his wife
Charlotte.

Graske originally sponsored one of the 50 turtles, and mid-year last year it was placed at the Y, one of the designated sites for display.

Later, the Community Foundation allowed bids on the 50 turtles, and Graske secured Hot Rod, eventually deciding it would look great in front of his beautiful new building on Barfield Drive – a place he constructed to house his expansive collection of muscle cars and sports memorabilia.

He explained his wish to the Y, whose directors and staff had hoped the

Steve Graskie, right, lays a hand on Teila, the turtle he bought and presented to the Y. Submitted Photos

turtle would be a permanent fixture in front of the Center.

Sensing disappointment, Garske came up with a plan, and this week a new, brightly painted sea turtle sculpture was bolted down into the concrete in front of the Center.

In Garske’s words, the new turtle Teila represented,  “Everything working out for everybody.”

The turtles were a countywide community arts project commissioned by the Community Foundation of Collier County and the United Arts Council of Collier County. It was called Turtle on the Town and featured 50 sea turtle sculptures.

They were embellished by local artists, and were based on a bronze created by the late artist Kathy Spalding.

Graske’s first idea was to approach the Community Foundation for any spares.

No go, unfortunately, said the Community Foundation. They were all gone. And, there was no possibility of making any new ones.

“So I said if anything changed, they should let me know,” Garske said. 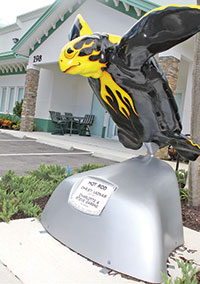 happened, the Community Foundation had retained three of the turtles for their own display, so members decided to ask Garske to make an offer for one of them.

“I said perfect. Done. The check’s in the mail,” Garske said.

He did not reveal his purchase prices for either Hot Rod or Teila, but did say it was public knowledge that the original sponsorships for the 50 turtles were $5,000 apiece.

“We (himself and wife Charlotte) are excited,” Garske said. “The Y gets a turtle, I get a turtle and the Community Foundation got money. Everyone’s happy.”

Garske recently retired from a long-established family business, Par Aide, which makes a variety of golf course equipment. It does business worldwide, and has warehouses in Singapore and the Netherlands.

“We are fortunate to have friends like Steve and Charlotte who want to enhance the YMCA for our community,” says Cindy Love, CEO of the Greater Marco Family YMCA.