A Stormy Recipe: How to Make a Hurricane 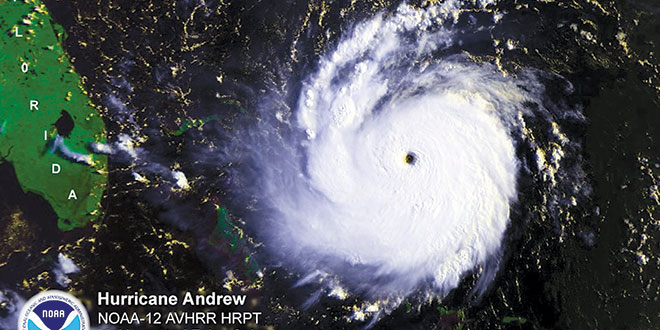 This photo of Hurricane Andrew was taken on August 23, 1992, one day before it impacted the Florida coast to become one of South Florida’s most devastating storms in history. SUBMITTED PHOTO

My wife Cathy and I love to cook. We are always conjuring up new ideas for old recipes. Sometimes we find that adding just one new ingredient can make a pleasant difference, but, more often than not, it seems that the original plan is the best.

Mother Nature has a recipe or two that she shares with us now and then, but she seems very consistent with her cookbook. Some concoctions are seasonal, while others can be experienced year round. Right now we are in the peak season for one of her more hearty dishes…the hurricane.

It seems more like a dose of bad medicine, but there are a number of ingredients that make the hurricane a specialty of the house. Take away just one element and the recipe doesn’t work. Let’s analyze the components here.

As with many dishes, heat is a main factor. Africa’s Sahara Desert is the first contributor. Covering an area as large as the United States, this land surface is extremely hot during the summer months, when the northern hemisphere of the earth receives the most solar energy. The land mass becomes so hot that the air rises as high as three miles to create an easterly directed jet stream. As this air moves toward Africa’s west coast it will eventually meet the Atlantic Ocean.

The second ingredient is water, but it cannot be too cold or the recipe will spoil. Atlantic Ocean temperatures must be a minimum of 80 degrees, and it must be this temperature, according to some scientists, to a depth of 150 feet. The ocean feeds both moisture and warmth into this developing storm. This creates an area of low atmospheric pressure. Winds from the surrounding area begin to move into the center of this storm. Warm water continues to heat the air, and it rises as it gets closer to the middle of the system. This provides more energy. The moisture will condense as it ascends, and this will cause thunderstorms. As air is pushed up out of the top, more air has to rush in at the surface to take its place. The ocean will now become more and more turbulent. The storm now has enough ingredients to feed itself.

Now, for these ingredients to be perfect, they must be stirred counterclockwise. As mentioned, the low pressure system forms and winds flow toward the center of the storm at the surface. We all know that the Earth spins (the sun rises in the East and sets in the West, which means Earth is moving from West to East). This rotation of the planet causes a deflection of the wind to the right, which causes the counterclockwise motion of the storm as winds move into it. It is called the Coriolis Effect.

If the recipe calls for the system to move more quickly along the surface of the planet, it will fuel itself even more, and the intensity of the ingredient mix will allow the storm to become a tropical storm, then a Category 1 hurricane, all the way up to a Category 5.

A few factors can affect the storm’s strength. If it moves into cooler water the fuel supply is eliminated, and the system will fall apart. If it reaches land the fuel supply, without moisture, is again affected, causing the system to weaken. If upper level winds above the storm are very intense, it is sheared, and again loses strength.

So there you have it. Another amazing recipe from Mother Nature’s cookbook. Birds and other animals migrate because of the tilt of the Earth and the time of year that the tilt takes place. Seeds and spores will travel in our jet streams to faraway places because the Earth spins. Hurricanes are born because of the tilt and the spin at specific times of the year.

The recipe doesn’t work unless all of the ingredients are properly measured. The Sahara Desert has to be hot enough. The Atlantic Ocean waters have to be warm enough. These have to be stirred in the proper direction for the correct amount of time, and other factors can ruin the recipe if introduced.

It’s just like baking a cake, and Mother Nature is the only one to determine how many cakes we get each year. As much as I like my wife’s cooking, I’ll hope that Mother Nature keeps her contributions to a minimum!

Bob is the owner of Stepping Stone ecotours and is a Naturalist on board the dolphin research boat, The Dolphin Explorer. He is a member of Florida SEE (Society for Ethical Ecotourism). Bob loves his wife, and her cooking, very much!