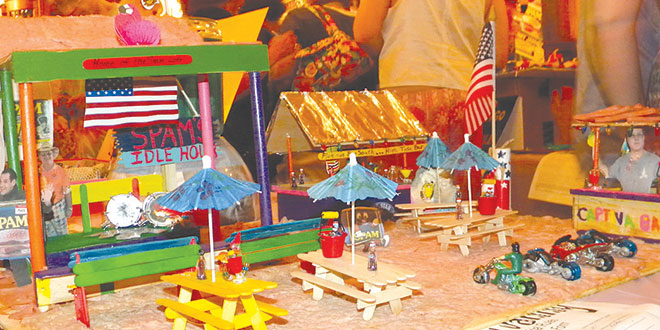 With attention to some cool details, the second place winner, Spam Idle Hour, stood out. PHOTOS BY MELINDA GRAY

In the weeks leading up to Saturday, June 28, my Facebook news-feed confirmed that time had run out. While my local friends had been diligently shopping and preparing, I had procrastinated. The nasty rumors claimed Bealls had completely sold out of pajamas. I chalk my ill-preparedness up to the fact that, until now, it never occurred to me to wear my night-shirt on a night out, but I’m always up for a challenge.

I had been looking forward to this party of legendary status since February, and after all my anticipation, the Little Bar’s 22nd Annual Spammy Jammy did not disappoint. It was a perfect convergence of conditions: a light breeze without a hint of rain; a noticeably absent bug population; and plenty of places to sit. 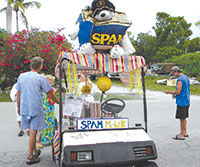 One of my favorites: the Spam Mobile.

It felt liberating to be out, socializing and having fun, wearing something normally only appreciated by my cats. Other pajama-clad party-goers packed in, ready to bid another season farewell and brace for the hurricane-prone summer months ahead.

Dating back to 1992, the yearly pajama party was created post-Hurricane Andrew, and has since given locals an annual night to blow off steam and talk about each other’s summer plans. Each year, the beloved Goodland party attracts throngs of visitors hoping to see the colorful, wildly creative Spam art and edibles. The staggering amount of Spam used in this year’s many impressive entries filled the rooms with an aroma I became quite familiar with as a child; fried potatoes and spam was one of our go-to meals.

Raiford Starke played to the 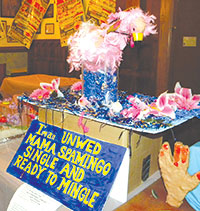 And the winner is…

standing-room-only crowd, giving his own musical offering to the Hurricane Gods. The sounds of blues and conversation spilled out of the building’s doors and windows, all due to be boarded up the following morning, with the assurance that the Little Bar will “See you in October.”