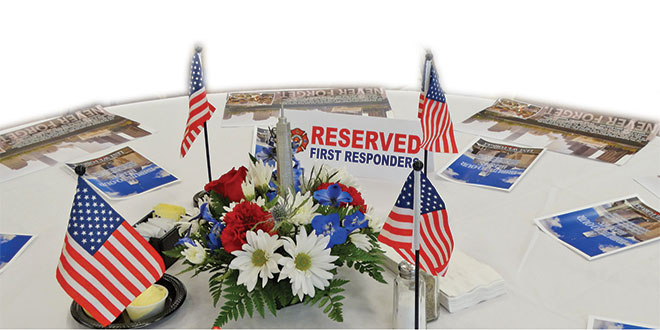 Most adults know exactly what they were doing when they saw news of the first plane striking the World Trade Center on September 11, 2001. It was a horrific day for Americans.

Island Police Chief Al Schettino spoke about his experiences that day while working in nearby New Jersey. Al talked about the difficulty of managing everything on such a large scale. Schettino mentioned how everyone says first responders that day were heroes. However, Schettino insists, “Everyone in the building that day, are the HEROES! Not just the police and fire personnel. Everyone there was a hero.”

Fire Chief Michael Murphy spoke next regarding the events. He assured the audience, which has been true for the past 15 years, “We will NEVER forget!” Deputy Chief Dave Batiato, initiated the “Ringing of the Bells,” a tradition which started in New 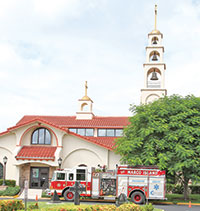 York. When a fireman dies, it is marked by code 5-5-5-5, or four sets of five. The bell used by the Marco Island Fire Rescue Department, donated by the late Ruth Roseboom, rang out in honor of the 2,977 people who died that tragic day. On display was a piece of steel beam from the Twin Towers, which took over five years to procure. The ladies choir of the San Marco Catholic Church sang. Kretch’s provided lunch for the attendees. Also paying tribute was Mike Stapleton of the Foundation, veteran Ray Ladurini led the group in the National Anthem, and brief words were said by Mrs. Schulman, a new full-time islander present at Ground Zero that day.