A Snapshot of the Savages 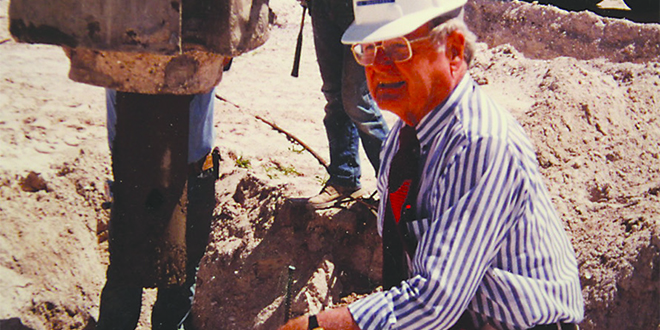 Herb Savage at a Marco Island construction worksite during his days with the Deltona Corporation.

It would be difficult, if not impossible, to find two people more steeped in all that is Marco Island than Herb and Emily Savage.

Herb, 98, is known by some as the city’s “unofficial mayor” for his role as a chief architect for the Mackle Brothers, developers of modern Marco, and his decades of civic involvement, unceasing good cheer and enthusiastic community support. Respect for his contributions led the city to rename the former Smokehouse Bay Bridge as the Herbert R. Savage Bridge, last June.

And the WWII and Korean War veteran’s leading the singing of “God Bless America” at gatherings, especially patriotic affairs, is something of a legend on Marco.

While Emily, 88, has had a lower public profile, she’s nonetheless been a presence in the community as well. She may be best known as the founder-owner of Shells by Emily, the gift and souvenir shop she operated for 31 years. Her shop was located on the second floor of a S. Collier Boulevard building where Herb’s architectural office could be found on the first floor.

Retired since last year, the Savage’s recollections of the island’s beginnings, as well as memories of their childhoods, their first encounter and 66 years of marriage are now available online at the Marco Island Television website, which chronicles the community’s events, history and people.

Herb and Emily are the subject of a two-part episode of website’s “Snapshot” program, in which they’re interviewed by their friend Skip Merriam, who is also the show’s host. William Hughes, of Marco Island Television and Hughes Productions, is also a longtime friend of the Savages.

In fact, it was Hughes who came up with the idea of featuring the Savages on the show, which was filmed last December.

“I like them very much and I respect them and I see them as examples to follow for how people should live their lives,” he said. “I love them both and had an idea and said, ‘Let’s do this.’ ”

Herb said he was interested in the project because he felt it was important for people to know more about Marco and how the community of today came to be.

“We just felt like we have a lot of history and that a lot of it needed to be shared,” added Emily.

That “history” is indeed interesting, touching upon such things as the fact both share Swedish ancestry – Herb’s mother emigrated from that Scandinavian country, as did both of Emily’s parents – and how that ultimately led to the Savage’s eventual meeting in Miami, where they lived before moving to Marco.

In 1959, Herb accepted an offer to join the Mackle Brothers’ Deltona Corporation, which developed communities throughout much of Florida. At that time, he was operating his own Miami architectural firm with a partner, Gordon Severud. Herb designed model homes and commercial buildings for the company, many ofwhich still grace the island. Among them is the former Marco Beach Hotel and Villas, which was purchased by the Marriott Corp. in 1979, becoming what is today the JW Marriott Marco Island Beach Resort.

“I joined them and I enjoyed the best part of my professional life,” he said during the two interviews with Merriam.

The interviews also delve into Emily’s musical background in both her native New Jersey and Florida, where her family moved when she was in high school. Those recollections cover such things as tap dancing at the 1939 World’s Fair in New York City, and singing and playing Hawaiian lap steel guitar professionally with a sister.

“It makes you remember,” Emily said of the interviews. “It jogs your memory. Sometimes you think, ‘I haven’t thought of that in forever.’ ”

Herb and Emily have three children, six grandchildren and two great-grandchildren residing in Florida and Illinois.

Not surprisingly, their long union has left them able to share laughs over many shared memories and to even complete each other’s thoughts. Both offered succinct opinions on what has led to their happy marriage.

“My wife has been a supportive and active wife over our 66 years of marriage,” said Herb. “Of course, her patience greatly contributed to our 66 years together. Having three wonderful children who were always there for us was also important to our family.”

“I agree with Herb that patience, consideration and family make it possible to share a long marriage,” she said. “Good health is also a plus.”

To view the episodes and learn more about Marco Island Television, visit vimeo.com/channels/marcoislandtelevision/204897349.