A “Snap Shot” Glimpse of Marco 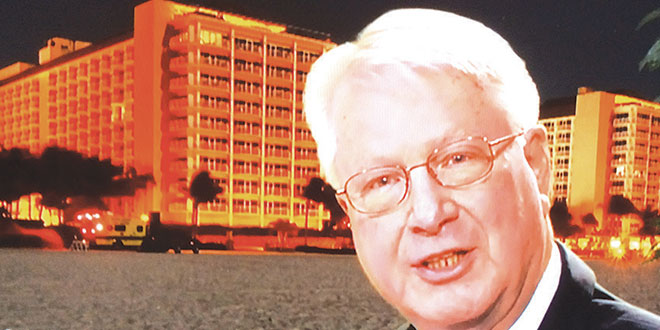 Marco Island Community Television has expanded its lineup with the addition of “Snap Shot.”

The internet-based TV station’s newest offering is an interview program that examines local topics and issues that are of particular importance to residents, visitors and potential new residents, such as recreation, real estate and development, historical points of interest and the environment.

“We’re trying to take little moments, ideas and particular subject matters, and take that, condense it and present it to people so they can get an idea of what’s available in the Marco Island area,” said Skip Merriam. Merriam is MICTV’s on-air talent, while the station’s founder, Bill Hughes, handles camera work and production.

Thus far, two shows are in the can.

The first 40-minute episode of “Snap Shot” commemorated the 50th anniversary of modern Marco Island with Merriam and realtor and long-time Marco resident Dick Shanahan discussing the vision for the community of the island’s original developers, the Mackle brothers. It was released in December. The second episode, in which Merriam interviews Jim Kalvin, founder and CEO of the Standing Watch boating rights advocacy group, hit the airwaves last month.

Discussions are underway with the Marco Island Historical Museum on selecting a topic for the third installment, which will pertain to the community’s rich history.

The goal, said Merriam, is to do two episodes a month, which viewers can watch at anytime on the MICTV website, as well as on Youtube and Vimeo. “From there, we’ve got a lot of ideas for what we’ll be doing,” he added. “We’re in the embryonic stage. This thing is developing faster than we thought, so we’re going to be on it during the tourist season.”

Merriam conducts interviews for “Snap Shot” and other MICTV programs in the home studio that Hughes has set up in his garage.

MICTV’s programming includes coverage of community events and topics of local interest, such as the successful effort to preserve the historic Smallwood Store in Chokoloskee. Viewing the videos is free, and the station is sponsored by local businesses, such as the Coastal Breeze News.

“We’re showing examples of the future and how community communications can be done,” said Hughes. Hughes and Merriam said future programming will examine such things as a primer on avoiding fraud when purchasing real estate in the local market, the Seminole tribe’s history, airboat rides, the history of the Everglades and more.

Feedback and suggestions on topics from the public are welcome, and MICTV wants to be a trusted source for information of value to viewers, whether they are local or from some far-flung locale, said Merriam.

“There are a ton of things to do in the Marco area, some historic and some recreational, but you need a venue to find out what these things are and to look at them in-depth so you have an understanding of what the full impact of that visit,” he added. “That’s where we can respond to a need and that’s really what we’re trying to do is fill in an area where some people may feel they don’t have access. Now you have it on screen and in-depth.”

For more information about MICTV and “Snap Shot” visit marcoislandcommunitytelevision.com/index.html, call Hughes Video Productions at 435-1188 or pick up DVDs of some programs at the Coastal Breeze office, located at 1857 San Marco Road, #216. The Coastal Breeze phone number is 393-4991.