A simple life in Naples… 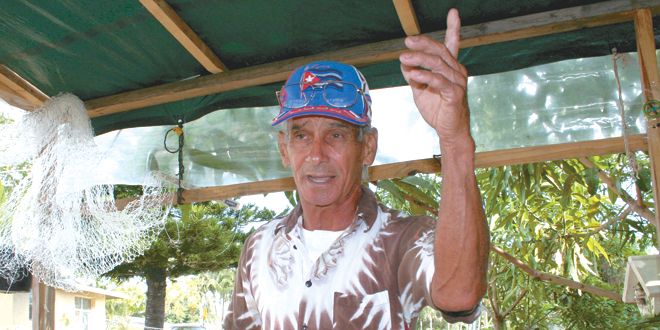 My friend and fellow soccer coach Rocco had been asking me to take a ride with him to Naples to meet a Cuban fisherman who lived an interesting life and had a great story to tell. “He fishes from a tiny boat near Marco Island and writes poetry with a pencil on yellow pads then types them on an ancient typewriter,” Rocco kept telling me. At first I put it off hoping he would give up but at the end I had to give him a date. A week or so ago, I met Rocco in front of the Chamber of Commerce offices and we drove to East Naples chatting along the way. We drove up Collier Boulevard, turned left on US 41 and then took a right turn towards Lely High School. We stopped in front of a small, simple, single story orange colored dwelling with a dirt driveway where a short, respectful looking man wearing a baseball cap embroidered with the Cuban flag was waiting for us.

He greeted us in Spanish since he spoke very little English and said “Hello, I am Rafael Hernandez Estepe.” My friend Rocco, who is fluent in Spanish, was now our official translator. It looked like this small dwelling housed three families since there were three separate entrances. Rafael escorted us to his tiny backyard where he had an ancient fourteen foot, hand painted boat with a small indistinguishable outboard motor attached to it. The outboard motor was also hand painted in grey and was partially immersed in a blue plastic barrel full of water indicating it was under repair. Next to this boat was a small aluminum canoe which appeared to be ten feet long, whose faded paint was peeling off, sat on the ground.

Rafael pointed to a small area covered by what 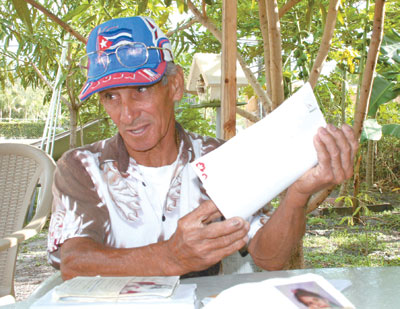 seemed to be a large piece of tarp. A white plastic table was placed on top of a floor covered with various carpet remnants. There was a white circular house fan attached to the ceiling, a cupboard on one side and a number of plastic chairs randomly placed around the small table. It was obvious that Rafael spent a majority of his free time in this simply furnished “lanai.” After the formal introductions I started to interview him. He told me he was born and raised in a small fishing town called Tunas de Zaza in southern Cuba with a population of 5,000 or more residents. Rafael who is now 65 years old was a fisherman all his life. In early 1990, unhappy with the Communist Government’s restrictions placed on him and his family, Rafael started to plot his escape. From our conversations and looking around his backyard, I determined that Rafael was very handy working on engines and used his skills to repair many things which may require others to use boxes of tools, with only a screwdriver, a wrench and a pair of pliers. He told me that sometime in 1990, he built a small handgun from pieces of metal and pipes he salvaged hoping to sell it to someone for much needed cash. An informant reported him to the Government. He was apprehended and sent to jail for five years. In jail, he was made to cut down trees and make coal. It was a backbreaking job which he hated. During his time in jail, all he could think about was to get himself and his family away from Cuba and the oppressive regime of Fidel Castro. He was only 12 years old when Castro came to power and as he grew up, Rafael hated the system Castro brought to his beloved country. 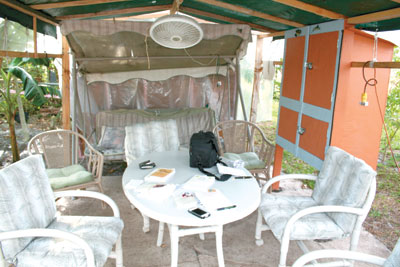 early release, he contacted two family members and started to plot his escape. Another informant reported him and it was obvious that he was going to jail once he got arrested again. He did not wait. Rafael, his nephew and one of his sons got into two very small plastic boats, each outfitted with a set of home-made oars, a couple of plastic jugs of drinking water, milk and some pork to keep them alive for a few days. In the dark of the night on November 14 (he reminded me that it was Valentines’ day, a day of love), they set off for the Cayman Islands. Navigating by the stars only and battling a number of storms, hunger and fear for three horrible days, rowing non-stop using the homemade oars, they made it to the shores of the Cayman Islands at three in the morning, fell asleep on the beach and were promptly apprehended by the local police as soon as the sun came up. They were deported to Mexico where he spent four months waiting for the documents which allowed him, his son and nephew to enter the USA as political refugees. Upon arrival, he settled in Naples where he worked hard to finally bring his wife and other son over to freedom.

Approximately five years ago while thinking of his journey to freedom and remembering that the Southern Cross had guided him to freedom along the way, he decided to write poems to honor Christ, his mother, love and his appreciation of his freedom. Rafael wrote over 700 poems and 25 rap songs, all in Spanish and all in his own handwriting. He then used his ancient typewriter to type these poems and fashioned them into small home-made books. He fishes almost every day and enjoys living in America where he said he found “loving 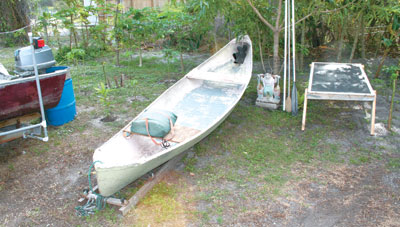 people, freedom and others who loved Jesus as much as he did.”

I had a member of my staff, Carlos Acosta who hails from Quito, Ecuador translate a couple of his poems into English and wanted to share them with our readers. Obviously, they are more meaningful and in perfect rhyme in Spanish. During this season of Hanukah, Christmas and other holidays I wanted our readers to enjoy Rafael’s love for his family, his freedom, despite having very little his efforts to share what he has with others. Rocco and I left Rafael after our two hour visit, each one of us carrying plastic bags of fresh fish he insisted on giving us, copies of his poems, his love and the energy he still possesses at 65.

His last words to us were; “Make sure you write my name correctly; it is Estepe; Rafael Hernandez Estepe.”

I know I will never forget him or his name.

Here are two of his poems as translated by Mr. Acosta:

VERSES FOR MY MOTHER

Mother, I know you left me

I will carry you in my heart forever,

I will never forget you.

Today, you are in a better place,

And the lord you never abandoned,

Is there with you.

He prepared you to overcome

The bars of my jail cell

And enter to see me.

NEED TO SEE YOU

I need to know when we can meet,

We have to talk.

I want to tell you many things,

I have to explain.

I have feelings for you

I need to express.

Only the lord is witness

To my beautiful and pure

I just want to give you my heart.