A Performance and a Conversation 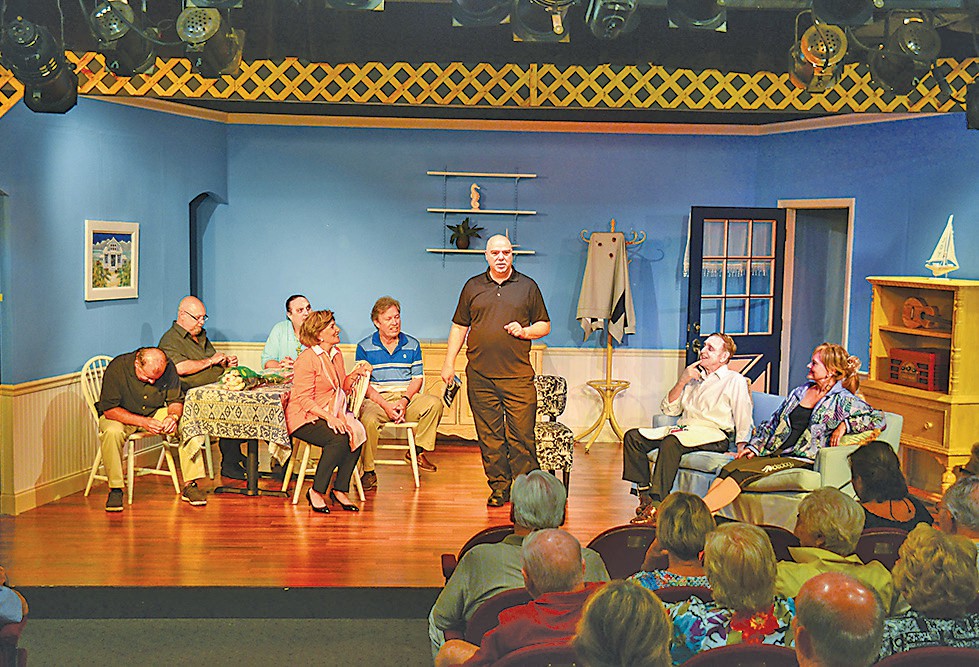 Playwright Joseph Simonelli engages in a “talkback” with the audience and cast at the Marco Players’ production of “Heaven Help Me.” Photos by Don Manley

The audience received a rare treat once bows had been taken and the lights turned up after The Marco Players’ debut performance of the comedy “Heaven Help Me.”

Sitting among them, but enjoying the production from a different perspective, was the play’s New York City-based author, Joseph Simonelli. At the play’s conclusion, he left his back-row seat and took center stage to conduct a “talkback,” which is the theatrical version of a Q&A.

Dahlstrom, Simonelli spent about twenty minutes tackling questions from the audience and cast who were seated around him.

Do you write with a certain type of performance in mind? How do you select the subject matter for your plays? How do you choose titles? These were just some of the topics the Staten Island resident addressed.

Dahlstrom noted that the talkback was probably a first for The Marco Players. “Traditionally, you never get to hear from a playwright,” she added.

“Heaven Help Me” centers on the three Holloway brothers’ struggle to rescue the family’s financially teetering restaurant chain which was started by their father. To buy some time, they try to sell the family beach house, which is where the play is set. However, potential sales are all complicated by a slight problem; their late brother Fred is haunting the place and won’t vacate.

“I liked the storyline of the play, the theme of the four brothers, and the fact that the one who had passed away was haunting the house,” said Dahlstrom in explaining why “Heaven Help Me” was selected. “I thought that was 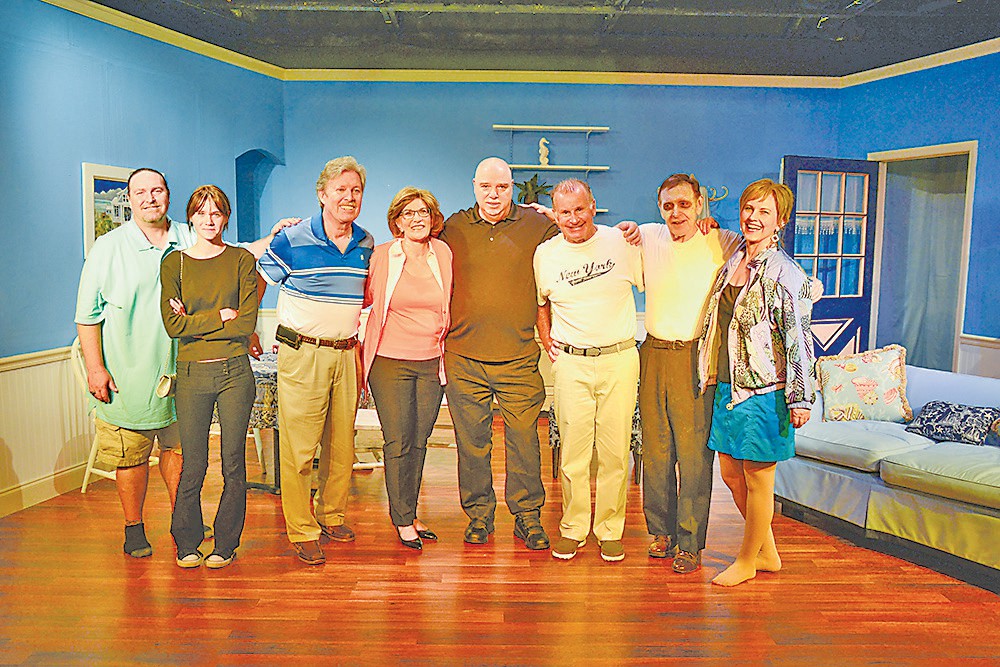 Simonelli and the cast of “Heaven Help Me.”

kind of clever. I could tell it would be funny. It has great dialogue, and of course our patrons love these kinds of stories about family relationships.”

Simonelli and his girlfriend, Lori Sigrist, spent four days on Marco recently where they viewed “Heaven Help Me,” as well as the Island Theater Company’s production of his comedy, “Men Are Dogs.”

The couple often plan their vacations around attending out-of-town productions from his catalog of seventeen plays, which also contains seasonal ghost stories, dramas, and a musical. Simonelli’s plays are performed across the U.S. and Canada.

“If anything is within three to four hours driving distance of New York, we’ll go,” Simonelli said. “It’s been a busy time for me. I’m an overnight success after twenty years and seventeen plays,” he added with a laugh.

Having two of his works performed almost simultaneously by theater companies in the same small community initially caused a bit of humorous confusion for Simonelli. He was in contact first with Island Theater Company’s co-founder Pat Berry regarding “Men Are Dogs.”

“Then when I saw ‘Heaven Help Me’ was playing on Marco Island, I thought the same theater had changed their mind about the title,” said Simonelli. “I didn’t know there were two theater companies on the island. I kept talking to two separate contacts, all the while thinking I was talking to the same person. Finally, I figured out that there were different theaters doing two of my titles at the same time. So, I said I just had to come down and jump from theater to theater doing talkbacks.” 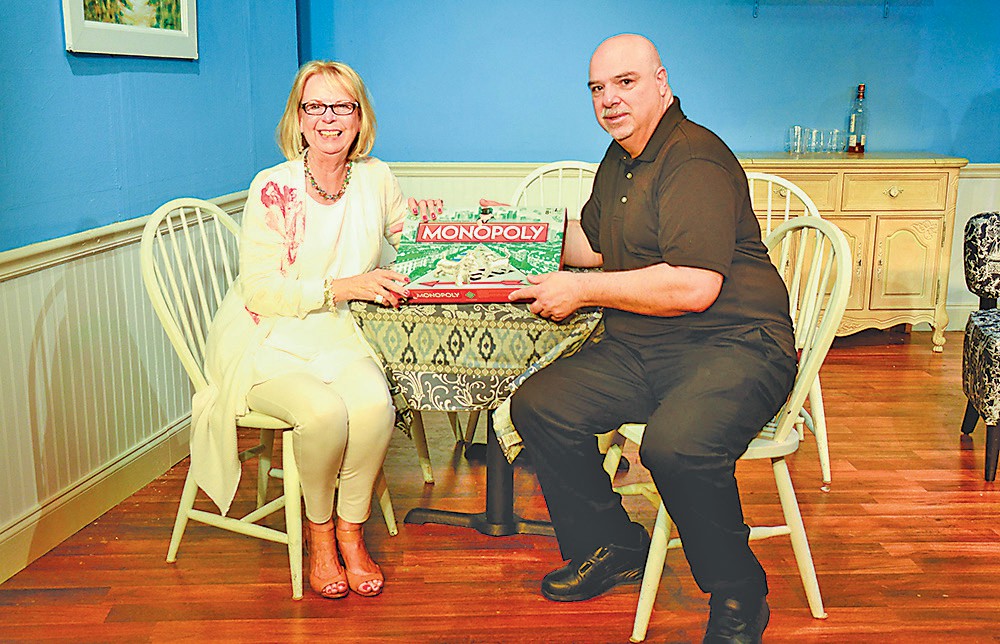 to be interesting and informative. “I always take something away from the performances I see, and I get ideas that I didn’t think of before. Each director brings their own personal touch to every performance, and I’ve done revisions off the shows that I’ve gone to see. Since I don’t have the luxury of doing out-oftown tryouts, I use these productions to tweak a play or revise it.”

The Brooklyn native’s interest in theater was fostered by his parents, who took him and his four siblings to Broadway as children, where they saw such stars as Danny Kaye in “Two by Two” and Katherine Hepburn in “Coco.” He also appeared in school plays in elementary and high school.

A former stockbroker, Simonelli left Wall Street at age forty following a divorce. He decided to reconnect with his past by joining a community theater company in New Jersey. Eventually, he decided to try his hand at writing a scene. This was an exercise that ultimately led him to complete his first play, the comedy “Roommates.”

Marco will be memorable for Simonelli, and for more reasons than the unexpected coincidence of two plays being performed at roughly the same time. The island could someday become his home.

“I’m looking around,” he said. “It’s getting close to retirement time, so if I can find something in the right price range…I’m not Neil Simon. I have his agent, but not his money.”

The Marco Players’ production of “Heaven Help Me” runs until May 7. Showtimes are Wednesdays through Saturdays at 8 PM and Sundays at 3 PM.