A paws to give Thanks 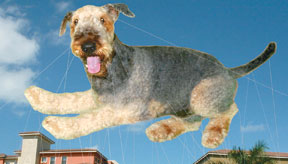 The human celebration of Thanksgiving is once again upon us. Thanksgiving—also known as the day before humans set their alarms at 3 AM to trample over other humans for something they call “doorbuster specials.”

One would think I would find this more appealing as I am a “doorbuster” every time our doorbell rings.

I admit—I have not been feeling all that inspired lately. Yes, I have many things to be thankful for: two misfit daddies who make me look brilliant by comparison, a bumbling “Chihua” who seems to understand the household pecking order, an exhilarating lifestyle in “Jurassic Park” (aka Fiddler’s Creek) which can—on any given day—prove more exciting than any visit to Disney’s Animal Kingdom.

Gators and panthers and bears—oh my!

However, like so many us in dire need of ego stroking, I chose to “beg” for inspiration from the best available outlet: The Facebook.

Turns out, my cyber cronies were more than happy to serve up some holiday inspiration with questions and suggestions for my gratitude-themed editorial.

On food preparation and consumption:

Debbie from Washington State asked how it feels to be omitted from Thanksgiving celebrations when just “people” are invited.

First, holiday invitations are crucial in my home. You see, the daddies cannot cook—period. As any major holiday approaches, they must begin a very well-rehearsed process of casually dropping their kitchen-impaired status into all communications. Typically, a Rachael Ray wanna-be will unwittingly stumble into the trap and provide the necessary invitation or our collective Thanksgiving dinner would be comprised of peanut butter, Raisin Bran, toast, Snausages and Mrs. Dash.

A special thank you must go to this year’s culinary victim, Carole Greene, who also understands that all invitations are addressed to me first—I choose the “+1.”

Yes, one of the daddies is not making the cut this year.

Food-prep expert Sharon from Kansas suggested that her dogs actually plot against her by wrapping themselves around her legs, tripping her, and hoping she drops the platters to a more advantageous ground level.

really exist but was merely an urban legend making this comment null and void.

Note for Kim: See you on Black Friday!

On the history of

Bill from Maryland suggested I provide an account of the Mayflower’s dog and his experience on the ship.

True, the Mayflower departed Plymouth, England in September 1620. However, as the breed of Airedale did not even exist until over 300 years later, the beginning of “history” corresponds to the dawn of the Airedale.

Ann from Naples asked me to explain “dog etiquette” when family comes to visit. For example, does the dog have to give up his chair or his bed?

If she has to ask, I am never going to visit her house again.

And Penny from Vermont commented, “I am sure some of us would rather spend Thanksgiving with the dogs than the in-laws!” It has to be said: I betcha her in-laws feel pretty much the same way too.

Mary from Missouri suggested I discuss my lifelong dream to ride in the Macy’s Thanksgiving Day Parade. Clearly, Mary does not understand my popularity and/or the lengths I will go to as an unapologetic publicity hound.

However, perhaps the most astute observation came from my friend “Kitty Kat” from Marco Island: “Please be happy that according to eatturkey.com, 46 million turkeys were consumed in the USA for Thanksgiving last year. According to the US Census, there are approximately 115 million households in the U.S.—and they don’t eat Airedales.”

When it comes down to it—I guess I’m just thankful I have so many affectionate, playful and loyal friends. I’m one lucky dog.

Tony Wakefield-Jones is a 10-year-old psychologically gifted Airedale. He can be found on Facebook at facebook.com/tony.wakefieldjones. A member of a family of creative thinkers, his Short Daddy, Randall Kenneth Jones, can be found on twitter at twitter.com/randallkjones.