A Passion For Pickleball 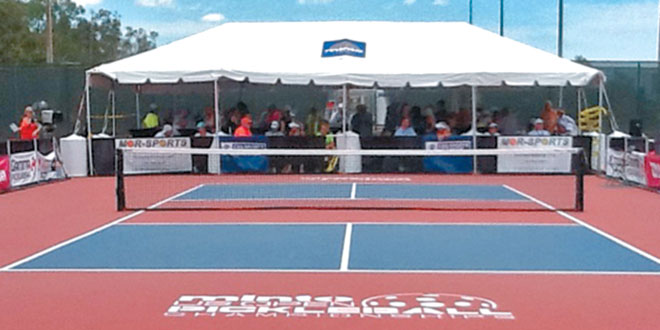 In addition to tennis tournaments, I have attended a couple of Unites States of America Pickleball Association (USAPA) sanctioned pickleball tournaments, but I have never attended a pickleball event of this caliber. So the U.S. Open Pickleball Tournament, which was held at East Naples Park, was a new experience for me.

Also new for me, was the fact that I have never attended any tournaments, tennis or pickleball, as a reporter. So I approached the event with a perspective coming from the eyes of an 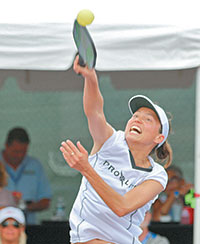 instructor/coach, an avid pickleball player, and as a full time Marco/Naples resident. Since I was not involved with running the event or competing in the tournament, I wanted to get a feel of what it was like to experience this inaugural national championship event as a local.

I first want to compliment Chris Evon, Terri Graham and Jim Ludwig for doing a spectacular job of organizing and running this tournament. It truly did have the feel of a big league professional event.

As is the case with the Miami Open tennis tournament held in Key Biscayne, a public park facility was converted into a world-class tournament site, and I must say, they did a phenomenal job!

Let’s start with arriving at the tournament.

Onsite parking was free and very convenient. The volunteers who were directing the parking were friendly and helpful.

From my parking spot, I was less than 100 yards from the tournament grounds. Once I was on the grounds, I found 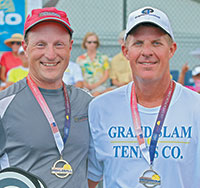 the hospitality tents to be a very nice place to spend time to get out of the sun for a while, socialize with friends, meet new friends, enjoy the food concessions, and meet all of the sponsors and vendors supporting the tournament.

The hospitality tents, where the vendors were located, were continuously filled with people who were attending the tournament. These people were inquiring about paddle construction and purchasing pickle ball apparel, paddles and balls.

I spoke with several of the vendors at the tournament and they all confirmed that this was one of the busiest and highly attended tournaments they had been to.

As I walked around and familiarized myself with the grounds, I immediately noticed how nice and new everything looked.

A lot of people don’t realize that at professional tennis tournaments the courts often get resurfaced on a yearly basis to be in tournament play condition.

The pickleball courts at the U.S. Open were all in tournament play condition, thanks to the 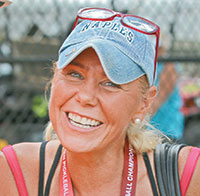 Tami Thomas of Naples is glowing after her gold medal victory in the women’s 50+ singles.

efforts of Gary Morton of Mor-Sports Court Surfacing. Gary recently installed the four new pickleball courts at the Racquet Center and I am proud to have top quality courts for my players on Marco Island.

Now let’s discuss the tournament and the competition.

Different than social rotational play, most pickleball tournament matches are played in a format of best of two out of three games, with point scoring of first to 15.

Also, different than in USTA-sanctioned tournaments, all pickleball matches have an official monitoring each game. These officials are trained volunteers, many of whom are also participating as players in the tournament. I found it created a feeling of camaraderie for everyone.

With 800 player entries, the variety of age divisions and levels of play was amazing.

When I was first introduced to the sport of pickleball about four years ago, I initially viewed it as nothing but a fun little social activity. Which, in its own right, does provide a fun

5.0 Mixed doubles winners Lucia Kovalova and Matt Wright move together as a unit to play a ball in the kitchen.

and competitive format for players. It is a great way for all of us baby boomers to stay active, make new friends and just have fun playing.

However, as I have been instructing pickleball and improving my knowledge and skills of the game on an advanced level of play, I have discovered that this is a real sport and it can be very challenging, both competitively and physically.

This discovery was reinforced when I watched the championship level play at the U.S. Open. These men and women are true professional athletes. These players spend a lot of time training, conditioning, drilling and practicing to get to the advanced level of play at which they are competing. The physical conditioning and athletic abilities shown by these players is truly at a level of athletes competing in other professional sports. 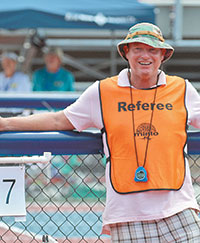 acting as one unit!

There were times where one player would appear to be intruding into his or her partner’s space or territory, but this strategy was all premeditated and well practiced for its purpose.

It was like watching two Olympic skaters on the ice, their movement in perfect synchronization.

Along with the Open Pro prize money level of competition, it was great to see players of all ages and abilities competing. I was watching a 60+ age division match. The level of play was around a 3.0. Even though the athleticism and shot making abilities were not as spectacular as what I saw on the Open Pro level of play, the competitiveness these players showed was very exciting to watch. These guys were playing like they thought they were competing in the Olympics!

As a coach and instructor, it was great to see a venue where all ages and levels of players could compete for top honors.

The diversity of players and 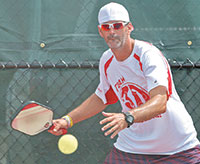 Competitors in the tournament included a woman who was seven months pregnant, a man with a prosthesis below his knee on his left leg, and a Wimbledon doubles champion. I saw players in their 50s teamed up with players in their 20s, competing in high level competition. But most of all, I saw that win or lose, everybody was having a great time!

I am proud to say that many Marco Island Racquet Club pickleball players competed in this event. You can find all match results at www.usopenpickleballchampionship.com.

This event is to be held here in Naples at East Naples Park for two more years. I can only hope that the popularity and success of the inaugural year will lead to this being a permanent location for this phenomenal event.