A Meal at Home in Croatia 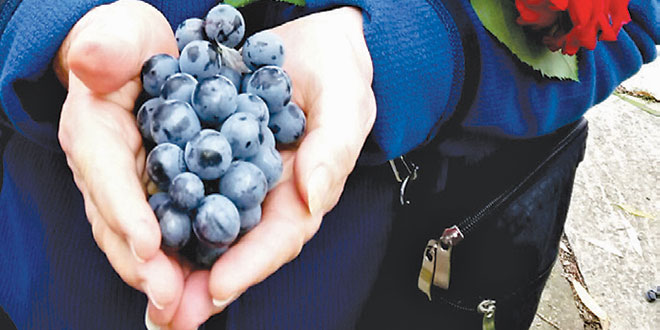 Parting gifts seem as much a part of Croatian life as the welcome plum brandy drink. We ate the grapes before we left and Joan carried the rose until it fell apart.

Our ship docks at Vukovar, Croatia. We 150 tourists flow out of the vessel to be bussed a few miles to Osijek. There we are to enjoy home cooked meals in private homes. This is one of the high points of every Grand Circle trip we have taken. Nearly 20 local families host eight to ten guests each for food and unguided, unscripted, unrestricted talk for three hours.

The bus delivers us to the home of Stephane Swarz. The guides stay on the bus.

First meetings are usually a bit awkward. But, Stephane and his family meet us at the bus and welcome us warmly in their accented English. Then, when I try to greet them in Croatian we all laugh because they have no idea what I’m trying to say. Awkwardness gone.

They invite us into their home and Stephane tells us he and his father had built it. We are impressed. He

The Swarz home is near a very popular Balkan bicycle trail, so Stephane built a dining hall and dorm to make a hostel. We ate in the dining hall. PHOTOS BY CARL AND JOAN KELLY

is very skilled. His father taught him stone work, carpentry, wine and brandy making, and a few other things.

Then we share the traditional Croatian first drink (and for those who chose, second, third…) homemade plum brandy. Or, for the ladies, if they choose, cherry wine, also homemade, but not nearly so toxic as the brandy. We toast one another, for we indeed feel welcomed, and warmed.

They share their food with us, a simple meal of beef, mashed potatoes, a shredded salad, bread, a flavored water and wine or brandy. And we talk.

Stephane tells us about his family and asks about ours, and where is home. We ask about building his house and learn he is a skilled tradesman, but officially unemployed. He barters. He trades his skill for a pig, or lamb, or bag of grain, or money. His neighbors do the same, so unemployment is officially high in Croatia.

We talk politics and learn that 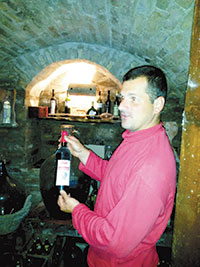 In his small winery room, Stephane explains that this wine is not yet ready to drink.

he does not think much of politicians. He says you must be a liar to be a politician. The Balkans have been invaded and misgoverned too much and too recently.

After our meal he shows us his one-room winery and his brandy still. We walk outside and around his property. He notes the tools of his various trades, his salvaged building materials, lumber, bricks, slate shingles, grape vines, plum and cherry trees. As we pass under a walnut tree his younger son begins cracking walnuts and handing them out.

We turn back toward the house where Stephane’s mother and his wife Sophia meet us with parting gifts of roses for the women and freshly picked grapes for all.

Soon our bus arrived. Too soon. We want to stay longer. In this short time we have come to like and respect these people. They are as comfortable as an old shoe. But, we hug and say our goodbye.