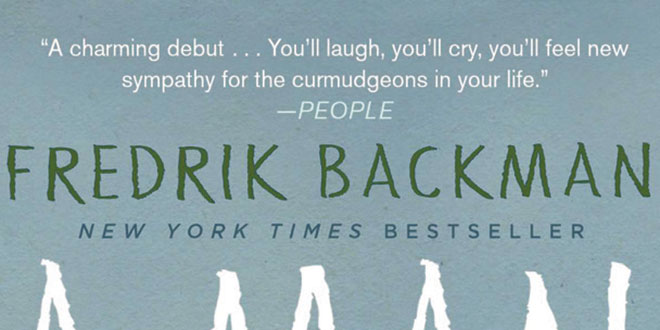 “Ove is fifty-nine. He drives a Saab.” Knowing his age is an important point in any man’s story. In Ove’s case, knowing that he drives and has always driven a Saab is essential in understanding him. One’s choice of vehicle reveals much about one’s character, in Ove’s mind. He evaluates others based upon their vehicle brand.

When we first meet Ove, he seems to be totally disagreeable, rude and disdainful to a salesman at an electronics store who is trying to help him choose an iPad. Chapter two takes us back three weeks and we learn Ove’s morning routine which begins with waking at 5:45 AM without an alarm clock. He had never owned one of the gadgets and has simply awakened at that time every day of his life and got up when he woke up – simple! After putting the coffee on to brew in a respectable percolator, not a fancy espresso or computerized brewer, he dresses and goes out to do his inspection of the neighborhood, to ensure there have been no burglaries overnight. Also to check if anyone had overstayed their welcome in the guest parking lot and exceeded the 24-hour limit. He keeps a notebook with the license plate numbers and if those vehicles show up in that notebook two days in a row, he calls the license bureau, gets their info, calls the offending party and lets them know about their transgression. It is, after all, the principle of the thing – people should obey signs.

He also had to check the trash bins now that the idiots in charge had decided trash needed to be separated. If he found a jar with the metal lid in the glass bin, he would unscrew the lid and put it into the metal bin – some imbeciles couldn’t even sort their own trash. If only the residential association had agreed to put in 24-hour surveillance cameras as he had suggested, they would be able to capture their misdeeds on tape and could put a stop to this irresponsibility, face the culprits with their misdeeds. Next he checked the bicycle shed to make sure no stray bikes were lying around. Then he went back to his two-story row house, locked the door and drank his morning coffee.

This particular Tuesday morning when we first accompany Ove on his morning inspection of the neighborhood, it is the day after he has been made redundant, having retirement forced on him. They had waited until Monday to let him loose because they did not want to ruin his weekend by telling him on Friday. Such consideration. After doing his inspection and drinking his coffee he had nothing to do, no work to go to after 31 years of faithful attendance. Ove surveys his neighborhood through the window, where The Poser (who drives an Audi for heaven’s sake) is jogging about and his girlfriend, the Blond Weed, is walking her handbag dog. A family has purchased the home directly opposite, probably a bunch of foreigners, but they hadn’t moved in yet. Ove decides it is a good time to install that hook in the ceiling in the living room. But he is distracted by a crunching sound coming from the front of his house.

It is the new neighbors – the Pregnant Foreign Woman and the blond Lanky One who cannot back up his Japanese car with a trailer on it. He has scraped the side of Ove’s house, after which he and his wife, the Pregnant Foreign Woman, apologize. On his second attempt, he crunches Ove’s mailbox. So Ove takes over and backs the trailer into their driveway, even though motor 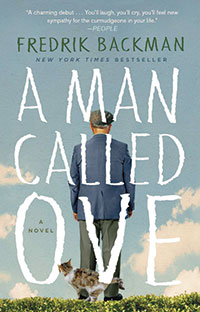 vehicles are not allowed in the residential area. Someone has to save the incompetent fool from himself. Then he stalks back to his own place. The Pregnant Foreign Woman later sends their 3-year-old and 7-year-old daughters over with a dish of saffron rice and chicken to thank Ove. The 3-year-old and her mother immediately take to Ove, somehow undeterred by his brusque façade.

The Ove in the early chapters, who refers to his neighbors by nicknames instead of their given names, has just been forced out of his job and recently lost his wife. He actually wants nothing more than to be with her. He still makes coffee for her every morning and hasn’t removed any of her clothing from the closets. Her Post-It notes are still on the fridge. He visits her gravesite regularly and does nothing without talking it over with her. He brings a fresh plant to her every week and plants them in the snow.

The arrival of the Pregnant Foreign Woman and the Lanky One changes Ove’s life. They and some of the others continue to interfere with his attempts to end his life. When Ove finally manages to get that hook in the ceiling, is near to blacking out, the useless rope breaks. They make nothing like they used to. When he tries to join Sonja by asphyxiation in the garage, the Pregnant Foreign Woman is banging on the garage door needing a ride to the hospital because the useless Lanky One has fallen off the ladder (borrowed from Ove of course). She insists on bringing along those children. There was no room for them in the ambulance. She turns to Ove for help and he of course helps because it is the right thing to do and that is what Ove is all about – doing the right thing.

Gradually he starts referring to his neighbors by their names instead of their nicknames and becomes more engaged in life outside his little two-story row house. In the flashback chapters, we learn about Ove’s childhood, how he developed a passion for construction and buildings as well as a fierce loyalty to Saab, how he met his wife Sonja and their life together. We also learn about his history with his neighbors, including Anita and Rune who were once great friends with Sonja and Ove. Now Rune is losing his memory and Anita is exhausted from caring for him and from fighting the authorities at social services who want to put him in a care home. This is not right and Ove feels a need to make it right because that is who he is.

“A Man Called Ove” is full of humor, with great characters, most of them likeable. Backman’s writing, or at least Mr. Koch’s translation of it, is smooth and every sentence advances the story and unfolds the characters for the reader. It is a deceptively easy, fun read that has a lot to say about human nature, our interactions with each other and how difficult it can be to go on living after a catastrophic loss. It is the story of how a bunch of incompetent imbeciles brought a man bent on suicide back to life. And how that man managed to set many things right. Rating 4.5/5.0