A Journey Through France on its Rivers 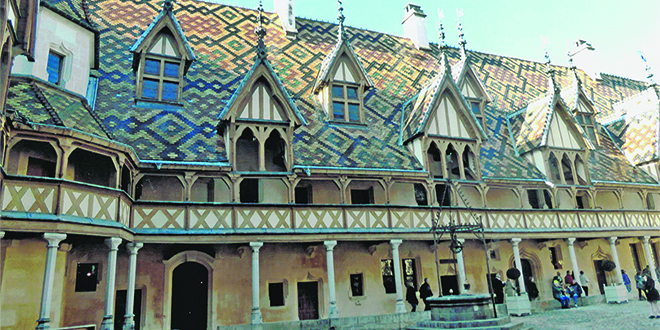 River trips are a relaxing and scenic way to experience the joy of travel, and I discovered this on a recent three-week journey through France from Province to Normandy, via Paris.

On a two-segment trip sponsored by Vantage Deluxe Travel, I traveled first on the Rhone and Saone Rivers from Avignon to Chalon and then, after a two-week pause in Paris, we cruised to Normandy on the Seine River. This article will feature the first river episode, and a future one will examine the next segment.

Our first stop was in Avignon, famed for its Palais des Popes, when the Papal Court escaped fractional conflict Rome to move here in the 14th century. The Palace is a huge, somewhat bare, feudal structure designed for protection. Avignon reflects its Medieval heritage as it is still surrounded by three miles of massive ramparts, and its narrow cobblestone streets are a walking history lesson. An interesting sight in Avignon are the remains of the St. Benezet Bridge, which contains four of its original 22 arches, and is recognized as the most famous bridge in France. It now only scans part of the Rhone River. 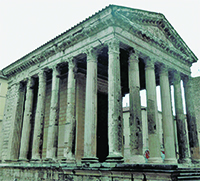 The Roman Arch in Vienne dates to 25 B.C.

the popes. It was mostly destroyed during World War II. It is now surrounded by colorful vineyards that produce one of the most famous and expensive wines in the world.

Viviers, our third destination, is virtually unknown with no tourist shops, but I found it to be one of the most unusual and well preserved Medieval towns I have ever visited. It is an attractive maze of twisted and narrow alleys lined with stone homes with slate roofs, adorned by lampposts, and covered with arches and cobblestone pavements. It has an old cathedral and a spectacular overlook on a hill high above the Rhone and the slate roofs of the village. A great discovery!

Vienne, a Gallo-Roman city, served as our next destination. It features a well preserved Roman temple of Augustus and Livia which dates from 25 B.C. The town also contains the remains of a Roman amphitheater that was once capable of seating 13,000 spectators. A final sight in town is St. Maurice’s Cathedral dating from 1230.

Next we reached Lyon, which dates from the Roman era, where the Rhone and the Saone Rivers converge, creating a peninsula in its modern center. Lyon should be approached with a healthy appetite as it has claimed world fame for its gastronomy. Our first appropriate stop 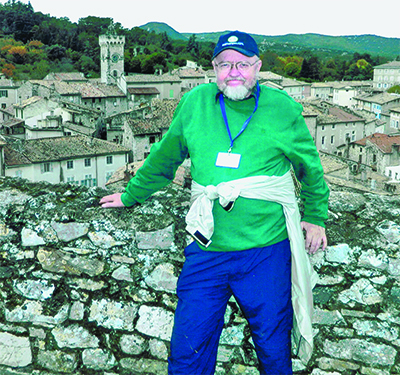 Submitted Photo: The author in the Medieval town of Viviers.

was at its famed gourmet market of Hallas de Lyon, which is a mecca for its culinary ingredients. Every food item, from cheese to sausages, is available here in colorful displays. Lyon has retained a pleasant atmosphere and attractive appearance along its rivers because it has virtually no high rise buildings. It is a center of French culture and is one of the most deserving cities in Europe worthy of visiting and dining.

We took an excursion from Lyon to the fortified Medieval village of Perouges, which has many attractive stone and half-timbered buildings on curved narrow streets, many of which have artisan workshops. Flowers and vines are draped on its walls. Tourists all over France flock to this perfect example of life in the Middle Ages. It is hard to imagine a more fitting and appropriate place to enjoy and imagine the Medieval experience in its original state.

We docked in Macon next, and from there we toured the nearby Beaujolais vineyards aglow on rolling hillsides covered with the vibrant autumn colors of red, orange and yellow. Later on the trip we visited the wine villages of Burgundy, one of France’s most famous wine regions. These countrysides are virtually covered with fields of the grape adorned in their bright colors.

On the next day 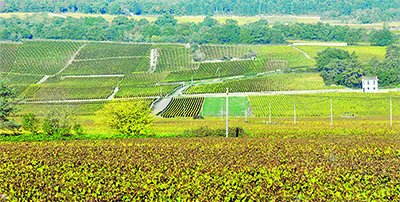 French vineyards in the fall.

we traveled to visit Cluny, the site of the grand and famous Abbey, founded in 910, and once the most powerful monastic operation in all of Europe. Its religious influence rivaled that of the monarchies and Papacy in the Middle Ages. It was virtually destroyed during the French Revolution, but the site remains interesting and significant even today.

Other river villages we visited included Tournus, which has a wealth of ancient buildings, narrow and curved streets, and small churches, and Chalon-sur-Saone, an historic city that has been an important market town since the Middle Ages. We also toured the UNESCO world heritage city of Beaune, a charming town featuring a 15th century building famed for its intricately colorful roof tiles.

From here we traveled to Paris to begin the second phase of our river journey cruising the famous Seine River to Normandy. This journey will be described in a future issue.