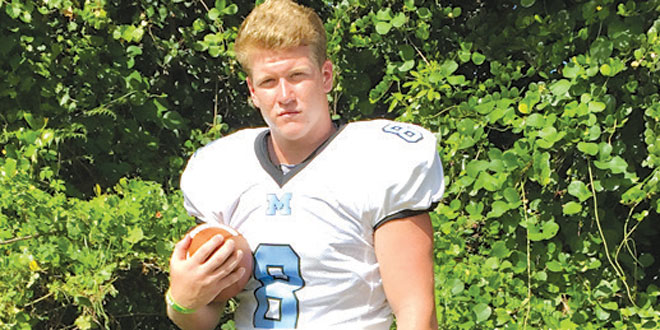 A few days after being abandoned and picked up by his uncle, Tyler ended up with his sister in East Naples. She faithfully took him over to Marco Island Charter Middle School every school day during his 7th grade year. The next year, his dad returned and managed to rent another place in Goodland. Tyler moved back in with him for his 8th grade year. During this period, Jim Prange, the father of his best friend, was keeping tabs on Tyler. “My dad wasn’t doing so well,” Tyler recalled, “I had to get an afternoon and weekend job to pay the rent.” Even this wasn’t enough. In April 2014, Tyler’s dad said that he had to go away again. The next day, the police showed up outside to enforce the eviction. Tyler packed his stuff in his father’s van and was driven over to the Pranges’ house on Marco Island. He and his dad unloaded his stuff in the Pranges’ garage. His dad said, “Sorry. I love you.” and left. Tyler later heard his dad was admitted to the David Lawrence Center in Naples. In October 2014, Jim Prange and his wife Missy became the legal guardians of Tyler Gresham.

Prange is a successful real estate agent at Premier Sotheby’s on Marco Island. He moved here from Indiana in 1980. He first met Tyler Gresham when Tyler was 7-years-old. Tyler played on an Optimist 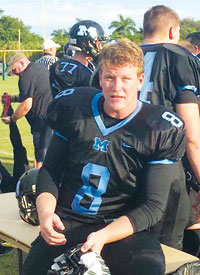 Tyler at a pre-season game.

football team, which Prange was coaching. Tyler became a star on the team and best friends with Tanner Prange, Prange’s son, who was also on the team. Tanner and Tyler became inseparable. Tyler was living in Goodland with his parents, and Prange would drop Tanner off down there every day during summers. “The two boys had some wonderful times in Goodland,” said Prange. Prange suspected that Nikki Bauer of the Little Bar and Shelly Balante, of the Olde Marco Lodge had a soft spot for Tyler. “They made sure that Tyler could always get a hot meal when he needed one,” said Prange. Prange kept in touch with Tyler, and learned that his mother was in prison and his dad was having a rough time. Often, Tyler was left alone and would stay with the Pranges for a while.

In April 2014, Prange learned that Tyler and his dad were being evicted from their Goodland residence. Tyler’s father brought him up to the Pranges’ and left. “Tyler has not seen much of his dad since then,” said Prange. Tyler has lived with the Pranges ever since. Tyler has told Prange that he loves his father for taking care of him after his mother went to prison. Tyler said that his father was recently living at St. Matthews House in Naples, and may have regressed again. Tyler visits his mother at a Naples halfway house, when he can. 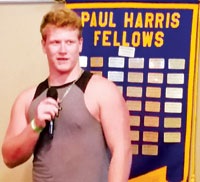 Tyler speaking at a meeting of the Sunrise Rotary Club.

He occasionally attends a church service with her. His father comes over for MIA Friday night football games. “Despite all that has happened,” said Prange, “Tyler still feels an obligation toward his parents.” “I must now be a parent to both of them,” Tyler told him.

Prange notes that through all of this, Tyler’s priority was to stay in school. Somehow, through good times and bad, he showed up every day and did well in both the classroom and the athletic field. It was a long, sometimes wet, round trip on his bicycle from Goodland up to TBE and MICMS.

Tyler has just begun his junior year at MIA. He has become a three-sport star and has maintained a high scholastic average. He had a breakout year in football last year and hopes to parlay that along with a high GPA into a college scholarship. In the meantime, Tyler is still trying to pay his way through an after school and weekend job.

When it comes to academics, Tyler looks upon Amber Prange – yes, that Amber Prange – as his mentor. Amber Prange is Jim Prange’s daughter, and also happens to be the assistant principal at MIA. Ms. Prange recalls that through a tumultuous life, Tyler always managed “to keep his nose clean and do well at school.” Tyler is starting his junior year at MIA after concluding a successful sophomore year. Ms. Prange would characterize him as

Tyler with a fellow student at the installation of the Rotary Club District Governor.

Greg Fowler is starting his third year as MIA’s football coach. Tyler says that the new football coach is one of the reasons he transferred to MIA from Lely last year. Coach Fowler has found Tyler to be a real gamer. “He played through a lot of injures and did everything you’d ask him to do. He’s a great kid and a good fit for the team,” Fowler said. Fowler had Tyler playing both ways: full back on offense, and outside linebacker on defense. He notes that Tyler was the team’s leading rusher last year, and also starts in two other sports at MIA. Like the rest of the team, Tyler works hard and takes his conditioning seriously. Fowler notes that Tyler broke into the team’s 1,000 pound club when he was able to lift a total combined weight of at least 1,000 pounds in the bench press, squat, and power clean lifts.

While talking to Jim Prange, it became obvious to me that for all Tyler Gresham’s accomplishments, the one Prange was most proud of was Tyler’s participation in the Rotary Club’s Youth Leadership Awards program (RYLA). Last spring, Tyler was nominated by the Sunrise 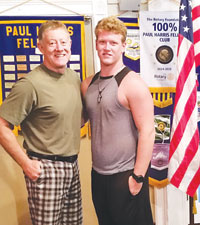 Tyler and Jim Prange at the Sunrise Rotary. SUBMITTED PHOTOS

Rotary Club of Marco Island (Prange is a member) to attend a state wide RYLA conference at Florida Atlantic University. In April 2015, Tyler joined students from Florida high schools, colleges, and young professional ranks for a five-day program, which emphasized leadership skills, communication skills, problem solving and conflict management, and community and global citizenship. All of the participants were nominated by their local Rotary Clubs. On August 11, Tyler addressed the Sunrise Rotary Club. According to Prange, Tyler did well and will be used by the club as a mentor and role model in the Youth Leadership Program.

Nancy and I met first Jim Prange and Tyler Gresham a few Saturdays ago, eating dinner at the Philly Grille. I noticed how comfortable each was with the other, and introduced myself. You don’t often see a father and teenage son actually enjoying a dinner together. Tyler introduced Jim Prange as his second father. It was evident to me that Tyler had respect and affection for Prange. I know Tyler better now. I am certain that he will never disappoint Jim and Missy Prange, who have sacrificed so much so that Tyler can realize his dreams. There are a lot of people pulling for Tyler.