A Goldsmith’s Tales of Christmas past 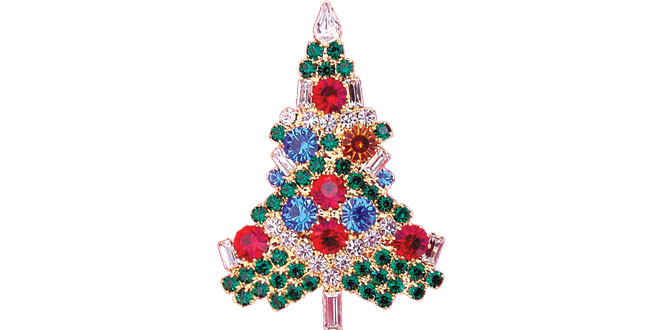 While working yet another long day and burning many evenings worth of midnight oil in my workshop with my 21-year-old son, Andrew, I tried to ignore hearing his complaints about working late. I came to the realization that this was to be my 44th Christmas season in this crazy business. If he only knew what I had to endure when I was his age.

Forty-four Christmas seasons as a bench jeweler! Even Santa’s head elf would have been impressed with the volume of work I would push out in those days and in a short period of time.

Thirty years ago, it seemed a little easier. I worked in the jeweler’s building in Boston with family and friends, who were also in the business, and back then, it was expected to work long hard hours each day. Morning began by waiting on customers that were sometimes three or four deep, and selling out what was in the showcases. At night, create what did not yet exist. We made an incredible amount of jewelry by hand in those days (my uncles and I) — all pieces custom made to the customers’ specifications.

If waiting on Christmas shoppers all day wasn’t enough to knock the stuffing out of you, working in the back room shop until the wee hours of the morning would be the coup de grace. Even if you had the flu or some other knock-you-down-and-out ailment, you better show up to work and keep up with everybody else. No if’s, and’s or but’s.

There were days I was so exhausted I swear I saw myself coming in the shop as I was leaving. One year, I even kept a sleeping bag behind the counter to save time because it took an hour to commute home and back. Oh yeah, I remember that season. When I finally made it home for a decent shower and a change of clothes, my wife said I looked like the first original walking dead — a zombie goldsmith.

Did I mention our Boston workshop also did the work for many of the city’s prestigious jewelry stores. Personally in those days, I also had 30 or 40 retail jewelry stores I had as accounts that I had to cater to. I could never keep up that pace today.

In November and December, the volume of incoming work was like drinking from a fire hose. You are darn right we made tons o’ money. In my late teens, I made more money than most Boston lawyers did, and I worked for every penny.

Those were the days, my friend! We thought they would never end. My uncles and I would sell diamonds as if we owned our own diamond mine. In the 70’s, you could buy a pair of gem-quality, two-carat stud earrings for under $1,000 or a three-carat diamond ring for under $5,000. I set so many large, fabulous diamonds, rubies, emeralds and sapphires that my hands bled and my eyes blurred. I was afraid to look in a mirror, and what about lunch? Who the heck had time for lunch? There was no rest for the weary. Must resist closing my eyes. More coffee, please!

Back then, gold was cheap, really cheap; less than $100 an ounce. I bought and sold gold chain and charms by the kilo. The shop was a hotbed of activity in those days. My Uncle Ernest was in his late 60’s. You had to admire his patience and stamina; he was a virtual war horse.

Many a Christmas Eve — what am I saying — every Christmas Eve, I would crawl home around midnight, just as my entire family would be cleaning up after a lavish Italian-style Christmas Eve dinner with Maine lobsters and fresh seafood. I’d walk in and settle for what was left over. Cold lobster, you shouldn’t have! I’d have a half-glass of wine and promptly pass out on the couch while everyone opened presents. Christmas day, I would not wake up until it was dark.

That was Christmas Past. “The good ole days.” Today, my son, Andrew, would never understand what it was like back then. Now, it’s kind of the same but different. I’m working seven days a week, twelve hour a day, even before Thanksgiving. Diamonds and gold are no longer cheap so the customers are not exactly three or four deep at the counter. My two uncles have passed away, and are probably making gold halos for Saint Peter as I speak. Plus, I can also cancel the armored truck to pick up the daily receipts. I honestly cannot complain about the holiday business so far. It’s better than the years past. It will be interesting to see if the pace continues. My ever-popular Marco angels and bracelets are selling like crazy, and to my amazement, so are diamonds!

So forgive me if I look like a deer staring into the headlights. I’m tired and grateful at the same time, and I have not yet reached the zombie stage of the game just yet.

And please, to prevent triggering an ugly outbreak of the zombie goldsmith during the month of December, I beg those of you who think now is a good time to leave your ridiculous repair requests, such as Cracker Jack surprise quality jewelry, lawn sculptures, car parts, home furnishings, worn out shoes, knock off handbags, cheap designer sunglasses and basically anything that is not fine jewelry, orientated at home until after, let’s say, New Year’s Eve 2075.

Back to a better place. Here I am listening to Christmas carols performed by Elvis as I deck the halls with holly and diamond studded styrofoam fish decorations. I pray the holiday spirit transfusion administered to me will take effect. I will also reflect on the past as I finish my second can of red bull and espresso combo. Cheers!

Happy Holidays! Merry Christmas! And a Happy New Year from all of us at The Harbor Goldsmith!