A Goldsmith Shop vs A Jewelry Store 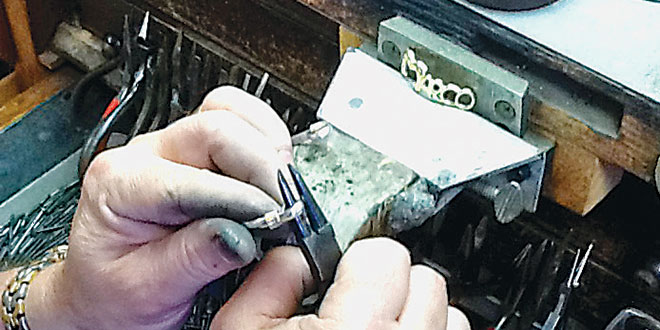 Often times I am asked to do services that relate to the jewelry business that I am unable to perform or I simply refuse to do. I know you are saying, that’s the wrong attitude, service and pleasing the customer is top priority when running a “service” business…horse hockey!

As many of you baby boomers know (I myself included), they simply don’t do or make things like they used to. Everything created today is obsolete in months instead of years and is an unrepairable throw away. That being a fact, there are certain things even mall or big box jewelry establishments won’t do for various reasons that usually involve time, money and above
all, risk.

Many jewelry stores accept all phases of watch services that include internal cleaning and full repairs on most brands, whereas I do not clean or repair the internals because I am a goldsmith, not a watchmaker. I work on every phase of the jewelry that enters my shop, which includes repairs or alterations to customer’s jewelry, diamond and stone setting, design and creation of new or custom made jewelry. We also carry and sell fine jewelry from many U.S. manufacturers and from our yearly European buying trips, where we discover unusual jewelry from countries that include Italy, France, Spain, and Germany. (We are not diamond or precious stone cutters, that work must be sent out of state.) Please note not all jewelry stores repair watches or jewelry on premises, and have no choice but to send or job it to outside sources, and the customer may have no clue as to where that outside source
may be.

My goldsmith shop in particular has been functioning for over 45 years, and in that time I learned accepting watch repair work was nothing but a hassle and a money losing experience for me, and the reason was because I did not do the work personally. Good watchmakers are not a dime a dozen, they are very rare. When was the last time you heard a high school grad say he or she was going to learn the trade of a professional watchmaker? I didn’t think so. It’s slowly becoming a dead art.

Many years I even refused to do watch battery replacement because my shop was next door to a watchmaker. He sent the customers with broken jewelry to me, I sent the broken watches to him. Life was so simple back then. Today I change watch batteries and supply or repair straps as a service to my customers, but that’s it. Why? More on that a
little later.

Many jewelry stores work by the K.I.S.S. system (Keep It Simple, Stupid), and they don’t accept any shape or form of repair work – they just sell jewelry out of their showcases, and it works for them. Taking in work requires special skills and sending intrinsic or sentimentally valuable work out is costly and risky, especially if you have to mail or ship it to who-knows-where, to who-knows-who, that will perform who-knows-what? Catching my drift here?

I don’t want to send anything out of my shop that does not belong to me if I have anything to say about it. Only my pearl and bead restringing work leaves the shop, but not the island; He’s only five minutes away, and have I known him and the excellent quality of his work for twenty-plus years. Everything else is done in my shop pertaining to jewelry. Now my reason for not repairing watches.

Many years ago I accepted (like a moron) two extremely valuable presidential Rolex watches, that mind you, I was told were “running a bit slow.” I realized later it was the couple that brought them in were the ones who were “a bit slow.”

Anyone who owns a Rolex knows that even a simple cleaning can cost as much as $500, and this service is suggested to be performed every three to five years depending on the dusty or damp conditions that the watch is subjected to. In my case there is the cost of insurance and shipping to and from Boston, to the only Rolex authorized watchmaker I trust to perform the cleaning, which would cost $350 each and take at least two weeks. This information was presented to the couple before me and they agreed to
the terms.

And here’s where nightmare begins. The next day after the watch was shipped USPS registered mail (aka safe snail mail) they preceded to call me every day for the status of the watches. Two weeks later the watches arrived, cleaned in and out. The watches honestly looked brand new, and they happily paid the charges.

A week later they came back looking not so happy. Apparently the watches were not running precisely smack-dab on the money on time, one worse than the other, even though they admitted before leaving them with me that they never actually ever told perfect time. (A common problem with many Rolexes.)

Needless to say, the seconds off per day that one of the watches was experiencing was unacceptable considering what they just paid for having “them” cleaned. I sent the “problem watches” back, only to be told by my watchmaker they are running precisely within tolerances, why did I send it back? They were running perfectly, according to Rolex factory specifications, which are three minutes a month, either way, fast or slow. “Are you telling me a
$20 Timex tells better time than a $30,000 Rolex?” he asked. “That would be accurate. No pun intended.”

Try explaining that to these two nudniks. I exasperated myself trying to. I simply reached into my safe and refunded every penny they gave me. End of problem, right? Wrong! They now demanded total satisfaction.

Rather than go medieval on these two, my answer was simple. You brought in two Rolexes that “ran funny.” I had them cleaned by a Rolex-authorized facility, and they now look brand new, and are running as well as a Rolex is supposed to. On top of that, it cost you nothing; I refunded all your money. We are done here. They then asked me who I would suggest to properly fix their watches. I told them I would not send them to anyone I know, that way I’d be saving my colleagues “the pain, anguish and loss of time and money dealing with the two of you.” This was my example of what happens by not doing it on premises, and that is the time, money and risk thing I mentioned. Heaven forbid the watches got lost in the mail. Expensive lesson learned.

Nowadays unless it is a very special brand of watch, meaning expensive, you are better off tossing it. The cost is more to repair most watches than to actually buy a new one. So what’s the point of developing an ulcer over it? The watch ran its course, get over it.

Richard Alan is a designer/goldsmith (who does not repair watches) and owner of The Harbor Goldsmith of Marco Island. He welcomes your questions and comments on all that glitters. www.harborgoldsmith.com.