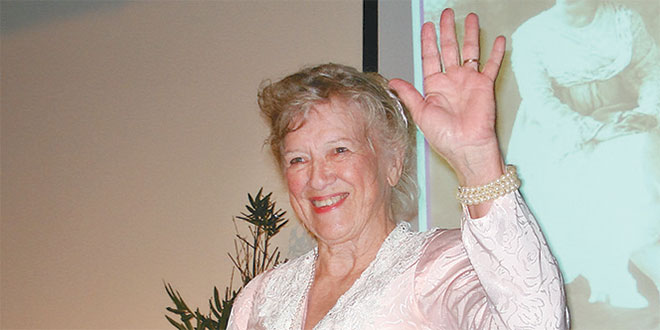 Betsy Perdichizzi is a Marco Island paragon of knowledge and talent. Her love of the island’s history combined with her acting and writing skills contributed to the development of the Marco Island Historical Society. Betsy and her husband, Bill, co-chaired the original capital campaign to raise funds for the construction of the Marco Island Historical Museum. The museum complex located at 180 S. Heathwood Drive was deeded to Collier County in 2010. The museum and Rose History Auditorium serve as cultural centers for the residents and visitors of Marco Island.

One way in which the funds were raised was by Betsy Perdichizzi’s one-woman performances, portraying Marco Island’s own Tommie Barfield. On July 5 at the Rose History Auditorium, Betsy Perdichizzi became “A Girl Named Tommie” once again. The audience was treated to a look at Tommie Barfield’s scrapbook of pictures, recalling the days from 1900 to 1950. The photographs were projected on the auditorium’s large screen, providing a look into the life and times of this “queen of Marco Island.” In 1901, at the age of 13, Tommie moved to Marco Island from Georgia with her father, A.T. Stephens, her mother, Annie Stephens, and several brothers and sisters. She married James Madison Barfield in 1906. A man almost 20 years her senior, he was the first realtor on Marco Island. Tommie Camilla Stephens Barfield became a businesswoman, wife, mother and lobbyist for education and transportation. At their home, the Heights Hotel, so named because it was the highest spot on the island, she sold her own “Elsie brand” jellies and jams to the guests. She even dabbled in beekeeping, selling her 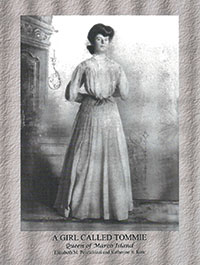 honey as well. Barron Gift Collier, the wealthy businessman who purchased 90% of Marco Island’s property from Tommie’s husband, was impressed by Tommie’s “tactics, strategy and tenacity.” She influenced and encouraged him to build the Tamiami Trail, which she saw as a promise for the future. In 1923, she took on the politicians in Tallahassee to request a division of what was then huge Lee County. Thus, Collier County was created and named in honor of Barron Collier. This amazing woman never obtained more than a third grade formal education, yet in 1924, she became the first School Superintendent in Collier County. On Marco Island, Tommie Barfield’s legacy is everlasting.

Betsy Perdichizzi’s portrayal of Tommie Barfield was so convincing, it felt as if we had been transported back in time. In speaking with Betsy, she told of her search for historical information, as she collected histories from many of Marco Island’s pioneers who were still alive when the Marco Island Historical Society first began. She developed a close friendship with Katherine “Kappy” Stephens Kirk, the niece of Tommie Barfield. With Kirk, Perdichizzi wrote the books A Girl Called Tommie, Queen of Marco Island and Island Voices. Both are published by Perdichizzi’s own company, Caxambas Publishing. A graduate of the College of William and Mary, Perdichizzi has written two other historical books as well.

In addition to her one woman portrayals, Perdichizzi is involved in leadership with the MIHS Historical Re-enactors, a group whose members portray historical figures, giving presentations on and off-island at schools, churches, hotels and even parades.

To learn more about the Marco Island Historical Society, including their future events and presentations, please visit www.themihs.com.