A Festival for Everyone 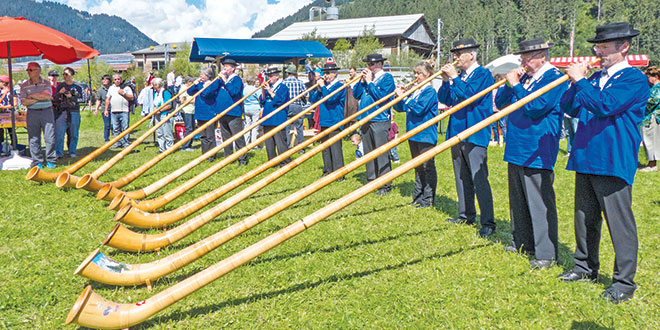 Alp horns are a part of most festivals in alpine Switzerland. PHOTOS BYVICKIE KELBER

Every country has its celebrations and festivals, but it seems that the diminutive Switzerland, not quite as large as Vermont and New Hampshire combined, has more than its share, especially in the summer and early autumn. Perhaps it is the hard working character of the Swiss (yes, I know I am stereotyping) that makes them want to party so much. Or, the long cold winters that inspire everyone to get outside in the warmer weather and celebrate, squeezing in as much enjoyment as possible, before fall turns into early winter.

We’ve visited Switzerland many times, often for a month at a time, in the early or middle summer and have enjoyed many of their traditional celebrations. A country of four different languages and cultures, their traditions vary by regions and range from a simple but aromatic onion festival to sophisticated events such as the Lucerne Music Festival, Locarno Film Festival or Montreux Jazz Festival.

For our first opportunity to spend time there in the later summer/early fall, we tried to attend as many festivals as possible while still allowing time to hike, visit cities, and relax. Not a week went by without a difficult choice to make among events. Since we were staying in the German speaking eastern Bernese Oberland, many of the celebrations revolved around alpine culture and folklore.

Most of the local celebrations included the triumvirate of jodeling, alp horns, and flag waving and tossing known as Fahnenschwingen. Swiss jodeling originated in the mountains, as a way of communicating from one hillside to another. It has evolved into a harmonious melody sung by a choir of men and women. Alp horns, which were also an early form of communication across Alpine valleys, are simple wooden instruments almost eleven and a half feet long. Their curved shape enable their tones to be heard almost four miles away.

Markets also were an integral part of most of the festivals we attended. Traditionally, fall was the time of year when farmers sold their cattle and other products, and paid their workers. 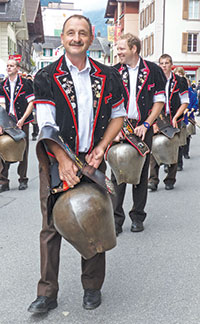 One of the more than 200 Tryhclen groups participating in a weekend festival in Meiringen.

The markets provided an outlet for the season’s bounty, and the opportunity to spend hard earned money.

No matter how large or small the festival, it also provided an occasion for men, women and children to sport their traditional regional attire. Each time we return to Switzerland, we are impressed by how important tradition is, including the wearing of Trachten, or folk costumes. What continues to amaze is not so much the number of young children who don their outfits, but the number of teenagers who willingly keep up the tradition.

In a prior column, I wrote about the many alpzuge we attended; the “cow parades” and festivals that accompany the return of the cows from the high alps to lower ground. Closely related are the celebrations surrounding a Chästeilet, or cheese exchange. The farmers whose cows have spent the summer in the high alps come together to divide the cheese that has been made during the season in proportion to the milk yield of their cows. We attended four such celebrations. What they all had in common was that they truly were parties for the local farmers, they all had jodelers, alp horns, flag wavers, and markets, and there was much food and drink served at large communal tables. The choice of food was typically limited to bratwurst, potato salad and chäsebrätli, the most heavenly cheese sandwich I have ever tasted. Using huge wheels of alp cheese, this fragrant, unique cheese is melted on top of slices of bread. I have never had cheese that good…pure ambrosia. Dessert was usually a huge meringue covered in fresh whipped cream.

The largest Chästeilet we went to was in the Justis Valley, high above Interlaken. There were about 1,500 people in attendance, mostly locals, and I have never seen so much cheese. As they brought the large cheese wheels out of the storage huts, they were passed from one person to another and carefully stacked on wooden planks. Occasionally, the workers spontaneously broke out into jodeling or would stop to drink from a

Swiss farmers emptying out the cheese huts in order to divide up the summer’s bounty.

communal bottle of schnapps. The farmers drew lots for the stacks of cheese, taking an amount in proportion to the milk given by each one’s cows. A quick estimate of the number of wheels shared that day was almost 3,000! At 10 to 20 kilograms a wheel, that was more than 30 tons.

The second largest festival we attended was tangentially related to cows, as it involved very large cowbells called Trychlen – 3,500 of them. A custom in the area where we stayed, the Haslital, is for the ringing of Trychlen throughout the villages from December 26-30 in order to close out the old year and scare away evil spirits from the new one. The Trychlers walk in lock step for hours up and down the streets. The town in which we stayed, Meiringen, was host to a weekend long end of summer festival of Trychlen. Everywhere we went, for three days, there were giant bells being rung in spontaneous demonstrations. Of course, food, drink, and entertainment were a large part of this congregation, and a parade of more than 200 Trychlen groups. The noise was deafening, yet melodious. All the groups were costumed, most in traditional garb, but some in wild costumes. Many had experts with a whip leading the group; a little scary when they performed in front of you in the narrow streets. Other groups handed out cheese, traditional cakes, beer, and schnapps to onlookers.

The culmination of our bell ringing weekend came on Sunday night. We went to a small, cozy restaurant for dinner. In marched a group from the village of Gsteig. They gathered round our table and serenaded us. Then, very Swiss like, they apologized for disturbing us, had a bit of refreshment, and boarded their bus for their hour and half trip home.

The Ausschiesset and Fulehung celebration we went to in Thun dates back to the 16th century, and marks the autumnal end of the shooting clubs practices. Traditional cross bow and rifle shooting competitions and parades marked this festival, along with 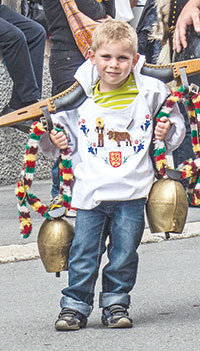 the appearance of the scary Fulehung dressed as a jester with a devil’s mask. He is said to be based on the court jester of Charles the Bold, a nemesis for the Swiss.

Although Brienz, known for its wood carving, is home to annual logging festivals, we were there for the World Logging Championship which is held biennially in different parts of the world; this is the first time it was in Switzerland. A tradition less than 50 years old, teams from 30 countries in Europe and Asia competed in 6 different events. Although a member of the team from the UK took me on a tour of the contest grounds and explained a lot to me, I could not even begin to say that I truly understood all that was involved in the events. It was interesting, however, to see the different fans waving the flags of their respective countries and cheering on their teams. I found it quite poignant to observe the Ukrainian team huddled together to discuss strategy in the peaceful surroundings of the neutral country of Switzerland, while their homeland was engaged in a struggle for its survival.

Our final festival was one celebrating wine growing in Spiez. The only such festival in the Bernese Oberland, it featured town wide activities including, of course, wine tasting, concerts, a parade displaying horses instead of cows, and was followed by a day long autumn market with more than 200 stalls.

Vickie is a former member of the Marco Island City Council and Artistic Director of the Marco Island Film Festival, and has been a volunteer for many island organizations. She is presently on the board of the Naples Mac Users Group. Prior to relocating to Marco, Vickie served as a school psychologist, Director of Special Services, and college instructor and also was a consultant to the New Jersey Department of Education