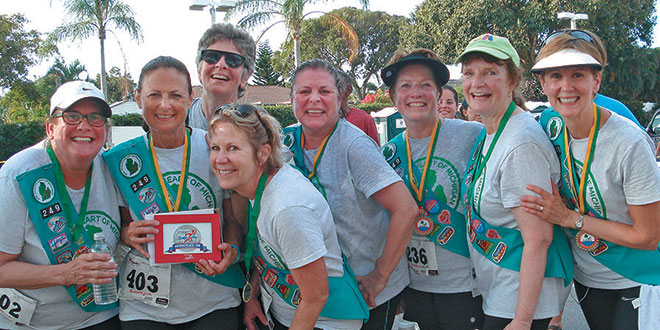 Former members of a Michigan Girl Scout troop congratulate their own Linda Orosz.

On Sunday, March 20, 650 runners converged at the Shops of Marco for the 2016 Marco Island Half Marathon and 5K Run/Walk, also known as the Bridge Run.

The event actually consists of two different races. The half marathon runs its 13.1-mile USA Track & Field (USATF) sanctioned course from the Shops of Marco through the rolling hills of Key Marco, onto the Goodland Bridge and back. The 5K winds its way through the residential Sheffield-Dogwood-Granada Drive area.

Several words can be used to describe this year’s event: Fun, family, friends, familiar faces and FAST! Half marathon runner Julie Diaz ignited the early morning with fun in her rainbow colored tutu. A number of families with members of all ages participated in this year’s event, many winning their age group 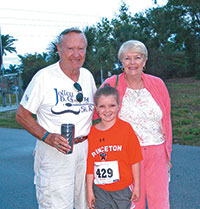 Maggie Poling with her grandparents before the 5K.

categories. Family could be seen in full force with the Poling family of Marco Island. Drs. Robert and Patricia Poling ran the half marathon, while their daughters Maggie and Eileen ran the 5K.

A group of friends, former Girl Scouts from Kalamazoo, Michigan, ran the 5K race. The eight women were reunited a few years ago at their 40th high school class reunion and continue to reconnect each year in what they call a “friendship retreat.” Wearing their green Girl Scout sashes, the group was ecstatic as their own Linda Orosz placed second in their age group.

Participants came from all over the United States, Canada and as far away as Germany. But there were many familiar Marco Island faces dashing along the racecourses, too. Local entertainer, Rose Kraemer (aka Rosetta Stone) 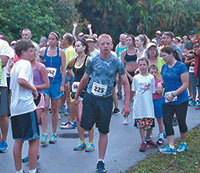 Runner #225, Tanner Harvey warms up before running the 5k

ran a strong and steady 5K.

Finally, the word was “fast” as the winners crossed the finish line. The 5K was won by 16-year-old Tanner Harvey with a time of 21:17. Visiting family in Naples, Tanner hails from Indiana. Placing second was Liz Coffey with a time of 21:40. The overall winner of the half marathon was Greg Kaczka, a student at the University of Miami, with a time of 1:16:46. The son of Jeff and Donna Kaczka of Marco Island, this was his first time running the Marco Island Half Marathon. Greg ran the Boston Marathon last year and plans to run it again in 2016. The first female in the half marathon was Megan Ping of Minnesota, vacationing on Marco Island with her family of five.