A Dolphin Rescue: One Year Later 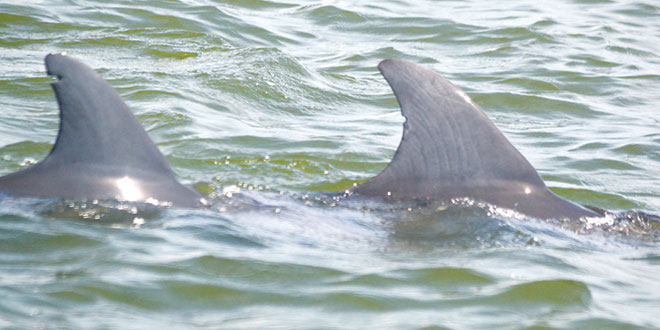 September 4, 2015: Mom Halfway (notch halfway up her fin) leads Skipper in the Marco River on the anniversary of Skipper’s rescue. The tag is now gone from Skipper’s fin, leaving a notch toward the top.

September 4, 2014: The Dolphin Explorer is not open for business. The entire crew is, instead, on the water with one specific goal…find a dolphin in distress.

Captain Bob Erickson is at the helm of the Dolphin Explorer with Coastal Breeze reporter Noelle Lowery and a naturalist on board. Captain Michael Tateo and Naturalist Kent Morse are on Michael’s boat. Captain Chris Desmond is on a pontoon, and I am on a separate pontoon as well. Even more boats are at the Collier Boat Ramp ready to launch, all coming together to find a needle in a haystack; Actually, two needles.

Through the photo identification of area dolphins, the crew of the Dolphin Explorer noticed that one of the Young of Year (YOY) had fishing line wrapped around its tailfin (fluke). Not only was a monofilament line seen, but a metal leader on that line, as well. The YOY’s name is Skipper and it is only 9 months old. One good snag of that line on a dock post or oyster bed could mean disaster. The line would tighten, eventually causing a possible sever of the fluke, which would end this dolphin’s life.

Our crew was on the water by 7:00 AM, scattered in different directions, looking in familiar areas where Skipper and her mom, Halfway, might usually be found.

There was a chance that we would not find them at all that day, but luck was on our side.

By 7:30 AM Captain Erickson and his team located mom and baby. The call went out on the radio that they were near Channel Marker 33, and we all headed for that location.

Back at the Collier launch site a rescue team was ready to join us. Officials from NOAA, Rookery Bay, FWC, Sea World and several other agencies heard the call and joined the team. A rescue was in the making.

The plan was to get Halfway 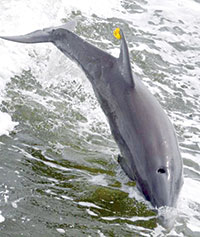 and Skipper to shallow water in hopes of capturing them in a net. While most of the team trailed behind the two, Captain Michael and Kent, who both know the area waters very well, surged in front of the dolphins to search for a potential rescue location. They found a spot at the southern tip of Little Marco Island, across from Keewaydin Island, that was ideal.

While most of the boats stayed to the rear of the action, several forged toward the front, led by NOAA. When all seemed right, a call went out on the radio “Net out!” A mullet boat, part of the team, began laying a 100-foot ring of net around the dolphins very quickly. Almost immediately another call went out “Swimmers in!” Twenty members were on the sandbar and scurried toward the net. They began to collapse the net until Halfway and Skipper could be handled. As the space became smaller, and the area for mom and baby became less mobile, they were calmed. A hand was placed on both dolphins. They were facing each other so that the two had eye contact.

A veterinarian snipped the line from Skipper’s fluke and assessed the damage. Fortunately, the metal leader on the fishing line had barely scathed the skin. Skipper would be allowed to stay in our waters with mom, Halfway. A yellow identification tag was placed on Skipper’s dorsal fin, and then both were released.

The entire operation, from the time that the net went out until the two were released, only took about thirty minutes. I counted nearly fifty people, twelve boats and seven different agencies that came together for a single purpose…to save a dolphin’s life.

The importance of this rescue was very significant. It showed that the work of the Dolphin Explorer is being noticed by many agencies, and that the survey teams’ photo identification efforts definitely have merit.

also determined during the rescue that Skipper is a female and that, too, is very important. Had this young one perished because of her injuries might not mean very much to very many people. However, Skipper’s mom, Halfway, is one of the most productive females in our waters. She gave birth to Seymour in 2004, Simon in 2007, Kaya in 2010 and Skipper in 2013. That is one new baby every three years.

Again, we learned during the rescue that Skipper is a female. If her mom’s genes successfully pass on to her, there is a strong chance that Skipper could be one of the most productive females in our waters when she matures to have her own calves!

Today Skipper is doing well. She is still with her mom and will stay for at least one more year. Knowing the Halfway’s pattern is to have a new baby every three years, Skipper may be on her own within the next twelve months, which is typical for Halfway’s offspring. The tag on Skipper’s dorsal fin is gone, probably snagged on barnacles or possibly pulled off by another dolphin. This has left a notch on the top back of her fin, which makes her easily recognizable. Oh yes, on the anniversary of her rescue Skipper was seen that day…twice!!! Thanks for showing up for your special day, young lady!

There are other stories out there as well. The Dolphin Explorer was involved in another major dolphin rescue a few years back that received national attention. Photos of other dolphin injuries have been forwarded to agencies for evaluation. The work will continue and the results, I am sure, can only end with a positive outcome. Stay tuned!

Bob is the owner of Stepping Stone Ecotours and is a Naturalist on board the Dolphin Explorer. He is a member of the Florida Society for Ethical Ecotourism (SEE). Bob loves his wife very much!