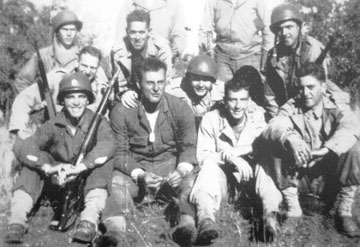 My father, Joseph “Coach” Mayo was part of The Greatest Generation. He was a wounded war hero who earned three Purple Hearts and the Bronze Star for his service with the 10th Mountain Division of the United States Army. Did I know this growing up? No, I did not.

I was a young adult when a friend visiting our home noticed my dad’s medals on his desk. He was a Naval officer, knowledgeable about military honors. “The Bronze Star is big, you know that?” I tucked that fact away to think about later.

We always celebrated Veterans Day with family activities, our American flag flying, visiting the cemetery and Dad presiding at the grill. He did not talk about his war experiences and we respected his reticence.

My father served in World War II. He was a proud young man when he enlisted in the Army and assigned to Camp Hale, Colorado, for training in the newly formed 10th Mountain Division. A group of young men was trained in mountain warfare. The 10th fought in the Apennine Mountain range in Northern Italy in the winter of 1944.

Their mission was to push the Germans off the mountains, to help liberate that part of Italy which the Germans still held strong. Their battles were successful and costly. Many lives were lost during fierce combat on the mountain ranges. The Americans lost over 1000 men but destroyed over 5 full German divisions. The men of the 10th Mountain Division helped to end the war in Italy.

My dad was wounded on the top of Mount Belvedere, the largest mountain in the range. He was hit by a hail of German machine gun fire. The bullets trailed up the left side of his leg, up his body, spinning him like a top.

In September, 2001, my parents flew to Italy. Dad discovered upon his return from the war that one of the villages the 10th Mountain liberated was the birthplace of his parents. He and Mom rented a car and drove into the mountains to find Bagni di Lucca, a small town rich in 14th and 15th century Roman history and famous for their hot springs.

When they reached the small town of 6,000 residents, they stopped at a news stand to ask for directions. The woman behind the counter became very excited when she looked at Dad, crying out with emotion. She took his hand and told him her story. She was a little girl during the war. When the Americans liberated her village she was sitting on a bridge crying. A soldier approached and offered her candy. He spoke Italian and questioned why she was crying. She answered. “We have no light in our house.” The soldier gave her his blanket and a flashlight and she smiled at him before she ran off.

Her name was Giuliana and she was six or seven during the war. My father was 21 years old when his company marched into Bagni di Lucca and liberated the town. He was 77 when he met Giuliana again with white hair but she remembered the big American soldier with the black hair and the blue, blue eyes. She wept as she told him.

“One of the happiest memories of my childhood was the small gift you gave me for my family.” My mother and father stood in disbelief.

They were persuaded to stay overnight in the town and the next day dozens of townspeople greeted them with open arms. They lived through the terrors of Nazi occupation and the joy of liberation. They were all deeply grateful, thanking the American soldier for saving their lives as if he had driven the Germans out single handedly.

In 2006, our family traveled to Italy on a 16 day vacation, which included a trip back in time. We were taking Dad to the Apennine Mountains, to Mt. Belvedere to revisit the site of the 10th Mountain assault on advancing German forces. As we climbed into the mountains, we stopped for directions and, to our surprise, the man who assisted us was wearing a 10th Mountain pin. My 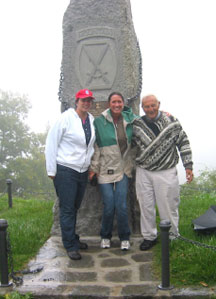 Coach Joe Mayo with his daughters, Melissa Mayo WIlliams and Angela Piatelli standing at the top.

father and brother-in-law chatted with him in Italian when an older man joined the conversation.

Remo Fioresi was 12 when the American soldiers librated his village, which was now called Lizzano-in-Belvedere, and before we knew it we were having a fabulous lunch at the Hotel Monte Grande. The hotel owner, Bruno Bartelomei, was excited to meet my father and identified himself as the honorary president of the Italian Chapter of the 10th Mountain Division. He offered himself and Remo as our guides up the mountain.

“My grandmother always taught me that respect for the American soldier is very important. The mountain men saved my family, they saved our village and they saved our country. We owe them so much.” My parents were so deeply moved, both tearful as Bruno continued. “I host and welcome any American soldier or family from the 10th Mountain Troops in my heart and home.”

The trip to the summit was bumpy and steep on narrow dirt roads not intended for our large, rental van. Mom suggested our two guides take my sister, Dad and me to the top. Dad and I rode in Bruno’s little car with Remo, Angela and Bruno hiking the last half mile to the top. During the last few minutes up the steep incline I realized this was a very big moment.

I was with my dad who scaled this mountain, 2,000 feet of vertical rock, to launch a brazen attack on the Germans. He took a round of machine gun bullets all up and down one side of his body, spent long months in hospitals. Dad required a full year to recover physically, and left behind on this mountain a promising football career. He carried shrapnel in his left lung, multiple scars, a limp and deafness from gunfire and he’s on his way back to the place where it all happened.

I helped Dad out of the little car when we reached the summit of Mt. Belvedere. It was rainy as we walked together toward a beautiful stone monument which we discovered had been designed and built by our new friend, Remo Fioresi.

My sister and Bruno finished their ascent and joined us. When she caught her breath, Angela said, “that was not an easy half mile, Dad, I don’t know how you did it way back then.” Dad was so proud to be on the mountain, to return to where it all happened. He was a bit emotional, happy to share this place and his memories with his daughters. He held our hands and then shook hands with Remo and Bruno, grateful for their understanding of what had been done for their country so long ago.

I stepped away from my father to spend a few moments reflecting on the meaning of this hallowed ground. I felt a deep emotion stirring in me, as if I were an intruder, a trespasser where so many men had died. Mount Belvedere was the biggest battle the 10th had to endure and the most costly in life. How strong the soldiers all were for sacrificing their young lives for the sake of people they never knew. I looked around as twilight filtered through the trees and the rain turned the grass lush and green. I realized this lovely scene was not the muddied, trampled battlefield my father remembered.

I walked back to Dad who was standing next to the monument honoring the fallen soldiers of the 10th Mountain Division. I was elated to be here, to be with my father, whom I loved and adored. To see him in this moment was a holy experience. Still I felt I did not belong on the summit of this mountain. This was Dad’s mountain, the mountain of the men of the 10th Mountain Division. This was their legacy to freedom.

The Mountain Men gave everything they had to drive the Germans back and helped to change the direction of the war. I saw Mt. Belvedere through my father’s eyes, a muddied battlefield where freedom was bought at a terrible, noble price. My sister and I descended the mountain walking tall and proud beside our father.