A Cruise in France on the Seine River 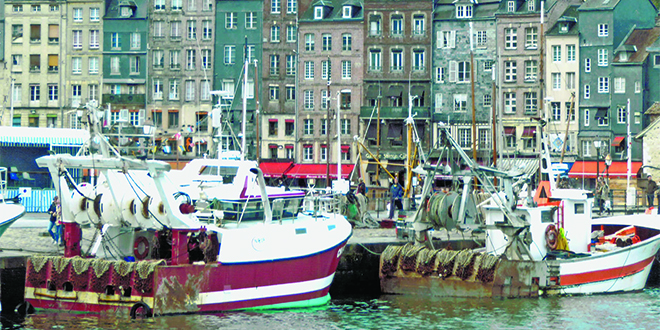 A river cruise on the Seine in France offers the unique opportunity to explore and discover places of extraordinary history and scenic beauty. I had this opportunity following a similar journey on the Rhone and Saone Rivers from Paris to Normandy, as described in a prior issue of the Coastal Breeze News. Our ten-day Seine trip from Paris to Normandy was conducted by Vantage Deluxe World Travel.

We left our docking area near the
Eiffel Tower and headed to our first stop in Vernon, an ancient market town that sits along the Seine about 50 miles from Paris. It has an elaborate 12th century church with beautiful stained glass windows that sits adjacent to several half-timbered buildings. Vernon serves as the gateway to Normandy.

We took a tour from Vernon to see the imposing Chateau de la Roche-Guyon that served as the Normandy headquarters on German General Erwin Rommel during the World War II Normandy campaign. We saw his office and strong bunkers beneath the Chateau.

Our next stop was at the delightful village of Les Andelys, which commands a strategic view of the Seine valley. It has here on a mountain above the town that Richard the Lionhearted in 1196 built the huge Chateau Galliard, a masterpiece of Medieval architecture that was virtually impregnable with 17 towers. It was the mightiest fortress in Europe in its era. It remains today, while in a state of ruin, as and imposing sight above the town and river. Les Andelys is also an attractive town full of half-timbered buildings and ancient churches.

Our journey continued along cliffs of white chalk to our next destination, the market village of Caudebec-en-Caux that is built in the shape of an amphitheater facing the Seine. It features a huge Cathedral dating from 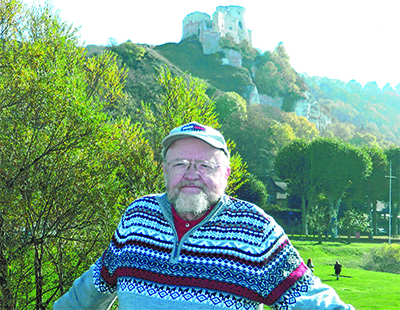 1425. The town was heavily damaged during World War II. Outside of town we visited the Abbey of St. Wandrille, whose monastic history dates from 700.

The next three days we docked in Honfleur, an ancient horseshoe-shaped picturesque harbor, which shelters a fishing fleet and yachts. Its townscape of four and five story stone residences dating from the 17th century line the harbor and are a delight for painters and photographers. Its 15th century church was constructed from timber obtained from local shipyards. Honfleur is a charming town to walk on its cobblestone streets along timbered buildings. As one account noted, it is a “delicious” town that has a “singular harmony.”

The following day we took a tour in Normandy to visit Omaha Beach where our troops landed to invade Europe during World War II. I have visited the beach and the American Cemetery above it on four previous occasions, but it is always an extremely moving experience seeing the 10,000 white headstones where those involved in the D-Day campaign rest. It is a sobering testament to their courage and valor. We walked on the beach and also visited the famous Pointe du Hoc site on the cliff, which our rangers scaled on the morning of the invasion to destroy German batteries that threatened the landings. It was a day of pride and honor.

Bayeux, the Normandy town that escaped damage in World War II, was our next destination. It is famous for the display of a 230-foot embroidered tapestry depicting events during William the Conqueror’s Norman conquest of England in 1066. It is a remarkable artistic depiction of the conquest and provides colorful graphic details of the clothes, ships, arms and customs of that era. There are 58 dramatic scenes displayed in great detail 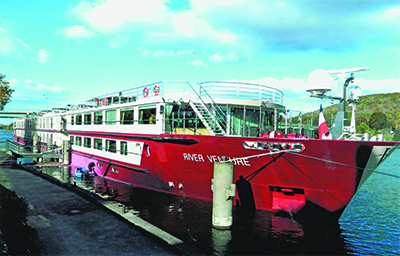 Photos by Dave Pattison: Our ship, the River Venture.

on this well-preserved lengthy cloth.

On our return cruise we stopped at the ancient and historic city of Rouen, which has played a large role in France’s history. It is probably most well known as the place were Joan of Arc was burned at the stake in 1431. A marker is in the centuries-old market square noting the place of the event, which is adjacent to a memorial church which features 16th century stained glass. Rouen also features one of the largest and magnificent Gothic cathedrals in France dating from 1202. Like many of the towns in Normandy, several buildings are half-timbered and many of the narrow streets are covered with cobblestones and glazed tiles. We also saw the Gros-Horloge (Great-Clock) astronomical clock placed on an arch on the main street in 1525. There is much to see and admire in this very historic Norman city.

Our final stop was the maritime city of Conflans-Sainte-Honorine, which sits on hills overlooking the confluence of the Seine and Oise rivers. Many barges which have been converted into charming houseboats are parked along its waterfront.

Thus I concluded my 20-day two-segment cruise, first on the Rhone and Saone rivers, and next my fascinating journey described here on the Seine River. The Seine flows by some of the most historic and interesting sights in Europe, and is worth and exploration and discovery.