A closer look at the Marriott’s $1 Million Offer 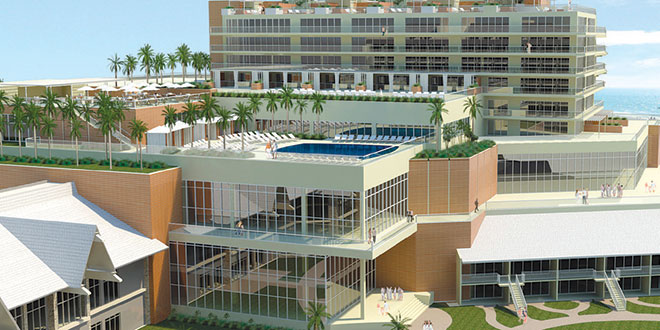 On June 2, the Marco Island Marriott Beach Resort’s $150 million renovation plan cleared another hurdle when City Council approved the amendment to the hotel’s planned unit development and master plan by a vote of 4-2. Councilors Amadeo Petricca and Chuck Kiester voted against the measure, and Councilor Joe Batte was not in attendance. The second reading of the PUD amendment will be held Monday, June 16, at 5:30 PM, during the next regular City Council meeting.

The approval came after nearly six hours of presentations, impassioned community responses, in-depth discussion and a surprise promise from Marriott General Manager Rick Medwedeff. The hotel’s ownership group will kick in $1 million to expedite the renovation of the Smokehouse Bay Bridge. The extra money takes the 18-month bridge project down to 10 months, eliminating any potential overlap between the bridge work and construction at the Marriott while also eliminating the potential need for Marriott construction traffic to use San Marco Road (U.S. 92).

“We were asked to look for yet another benefit to Marco Island, and we took that to heart,” Medwedeff told city councilors. “This would be a significant enhancement to island residents…It would benefit the tax payer because we would fund the $1 million to make that happen.”

Now, it is up to City Manager Roger Hernstadt, city councilors and city staff to get the bridge contractor — Quality Enterprises USA Inc. — on board and make the transaction happen. According to Hernstadt, the city already has requested a revised construction schedule from Quality Enterprises, including all associated conditions such as work hours. This information would come before City Council for approval or rejection.

City Council approved the $7.625 million contract for the Smokehouse Bay Bridge during its May 19 regular meeting. To be sure, it was not a hasty decision, as the city has been wrestling with the prospect of rebuilding the bridge for more than six years. In fact, it has spent upwards of $2 million trying to repair the deteriorating spans, concrete spalls and crumbling seawalls while also designing a replacement bridge.

The real work began about a year ago, though. The bid process fell apart when the price tag for the then-approved suspension bridge design proved a moving target — ranging between $8 million to more than $13.1 million. The four bids received by the city at the time came in between $3.4 million to $5.1 million over original cost estimates.

Public Works Director Tim Pinter and the design engineers from T.Y. Lin International went back to the drawing board, value-engineering the original design. At a little more than $7.2 million, the revised construction cost estimate proved more palatable to city officials, and they sent the bridge back out to bid in February.

According to the bid response from Quality Enterprises, the construction schedule for the four-lane bridge project is set at 18 months. Currently, no closures are scheduled with one southbound and northbound lane remaining open at all times.

During a prior City Council discussion about the project, councilors rejected a couple of alternative schedules that would speed up the construction. Chief among those alternatives was the dismissal of an expanded work day and week, allowing Quality Enterprises to work on the bridge from 7 AM-10 PM, six days a week, and effectively cutting the timeline for the project by eight months.

Councilors were concerned about inconveniences to residents in the area — and the extra $1 million necessary to fund the expedited schedule.

Still, the idea gave some city councilors food for thought, and Councilor Kiester openly ruminated on the possibility of a “third-party” funding source for the extra $1 million when it originally surfaced. That’s why city councilors were not necessarily surprised by Medwedeff’s offer for the Marriott to provide the funding.

“I believe this was a very generous offer by the Marriott that is actually beneficial to the entire island community,” said Councilor Bob Brown in an interview after the meeting. “Some have thought that it only helps the Marriott because they need to expedite their time frame, but since there are multiple projects that would affect the island, this actually reduces construction time overall, which is where all Marco Island residents benefit.”

“We’ve identified the Smokehouse Bay Bridge project as critical to the island, and the faster we can get this project done the better it will be for all,” he added.

Still, Brown understands there will be challenges. “That being said we need to be sensitive to those who will be most affected — living near and around the bridge.”

Those challenges surfaced quickly during the June 2 public hearing, as a number of residents — including Bill Harris and former Marco Island city councilor and current member of the Planning Advisory Board Dr. Bill Trotter — voiced their concerns about the impact extended work hours for the bridge would have on the lives of the residents living in the neighborhoods near the bridge, primarily those in The Esplanade.

Councilors Kiester, Petricca and Council Vice Chairman Larry Sacher also expressed unease with expanded work hours. “The whole point of expediting the bridge construction will really cause problems on Collier Boulevard, but to reduce the time involved to 10 months is mutually beneficial to the Marriott and the city,” Councilor Kiester said during the meeting.

Ultimately, though, the decision will be that of city officials and the team from Quality Enterprises, who did not return repeated attempts to contact them. Other options to expedite the project will most likely be explored. “There could be several ways to adjust timing, and that is not necessarily just eliminating all possibility of extended hour(s),” noted Brown.

“It’s a decision the contractor will have to make should Council put limits on hours,” explained Sacher in an interview following the public hearing. “As I understand it, some of the work — especially the prefabrication of materials part — cannot really be accelerated, but actual construction work might be able to be accelerated by hiring more people with the extra money.”

Sacher continued: “I would like to think that the contractor would find the incentive of $1 million extra enough to find a way to work within our parameters to earn the money.”