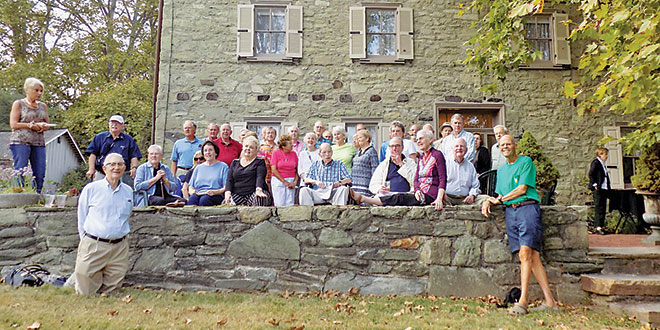 Swarthmore High School’s 60th reunion – The author, lower right, the sole Floridian in the bunch, was the only one wearing shorts. He was the unanimous choice for “best legs.”

There are still some of us in Goodland who still travel back to a receding past, to enjoy the company of old friends and classmates at a high school reunion. I will never forget my last trip back. On a balmy September 17, 2016, a Saturday, Swarthmore High School’s Class of 1956 (or what was left of it) gathered for its 60th reunion. Swarthmore is a leafy college town about 6 miles southwest of Philadelphia. It is by all accounts the gem of the western suburbs and has a strong nostalgic hold on all who have ever lived there. In the 40s and 50s it was surrounded by woods and farms, but connected to Philadelphia by a commuter line. Out of a graduating class of 111, 82 still survive, and 36 made it back to the reunion. It was held on a 276-year-old farm about 17 miles west of Swarthmore, in the rolling horse country of Chester County. The farm has been beautifully restored, by schoolmates Ed and Amy Borer, and is listed on the National Register of Historic Places. The stone Georgian farmhouse, hosting the reunion, was built in 1740, during the reign of George II (He preceded George III who presided during the Revolution.) The 18-acre farm is a place of unimaginable peace and tranquility today, but on September 11, 1777 was ground zero for the climax of the Battle

Walt with his old friend John Pegram, a successful patent lawyer. In the 6th grade, they published a paper together. Walt sold ads to local merchants, auguring well for his life’s vocation.

of Brandywine. On that date, the British were rolling up Washington’s army, which they had brilliantly outflanked. The battle raged across the farm and along the Birmingham Road, which borders it. The Americans put up a spirited resistance, but were outnumbered and forced to retreat. It was on this hallowed ground that Ed and Amy have hosted our last three reunions, which have been held every five years since graduation. This one was different from the rest. Our ranks were thinning. There was an unspoken sense of both a beginning and an ending. On the front patios of the farmhouse there was an outpouring of special memories and palpable affection between old friends and classmates. Who would be here next time? Should we wait another five years? And then, Walt Reynolds arrived.

Few of us recognized the man who was wheeled into our midst by the trim attractive woman. His mouth and eyes were badly distorted and he was unable to speak except for grunts, which could barely be recognized as yes’s or no’s. We soon learned who he was and what he was doing there. He told us himself. It was our classmate, Walt Reynolds, making what would probably his final pilgrimage to his beloved Swarthmore and doing so under the most daunting of circumstances. Walt badly wanted to commune with his classmates and share the memories of happier days. Now, he was suffering from

Submitted Photo Walt and Jodi at a rest stopon the way up. Walt can still walk with the aid of a walker, but brought along a wheel chair to avoidfatigue.

an incurable disease, which would only get worse. He wanted to make this trip before it did. Walt had prepared meticulously in an effort to strip us of our embarrassment at his condition and allow us to enter into a give and take with him. Upon greeting Walt, he handed each interlocutor a bio, which communicated his side of the reminiscences and impliedly invited his classmates to respond. He had prepared a whole stack of them. They were poignant and heartbreaking. Despite his appearance, Walt wanted to be treated like one of the guys. It worked.

His bio began, “Hi Classmate, I’m Walter Reynolds. I have Oculopharyngeal Muscular Dystrophy. It is a rare form of MD that has affected my vision, my ability to swallow, to speak, my facial muscles and my arms and legs. In 2010, I gave up driving due to vision problems and had a feeding tube inserted. I have not swallowed or tasted food since then. I pour a liquid formula into my feeding tube 3 times a day. I have difficulty hearing even with hearing aids.” Following this was a short summary of his life after high school – all the answers one would hope to get from a classmate at a reunion. Many tarried at his side, amazed and moved by his courage.

I wondered how he had gotten here. I envisioned an expensive van with lifts and a professional caregiver.

Photo by Barry GwinnFair Meadow Farm was added to the National Register of Historic Properties in the 1950s. The farmhouse, at upperleft, where the reunion is getting underway, was built in 1740, the Barn in 1804. When Ed and Amy bought the property, 18 acres, the place and buildings were in bad shape. They hosted multiple reunions here both for Amy’s high school class as well as Ed’s.

Actually he was driven up by Jodie Drennon, a family friend. They drove straight through, 649 miles from Charleston, South Carolina, a 12-hour trip in a four door midsize Pontiac G6. It took them over an hour to transit Washington, DC at the height of the Friday rush hour. “It was tight,” said Drennon, “By the time I got him home, we had a system that worked pretty well.” Drennon met Walt in 1992 shortly after she moved to Charleston. “I worked in a donut shop back then. Walter sold marketing merchandise to the owners and would buy donuts to take home,” said Drennon, “Walter has since become like family to me, my husband, and son.” Walt lives by himself in a one-bedroom apartment in a downtown Charleston retirement community. His wife died 18 years ago. Assuming that the reunion would be held in the summer, Walt’s daughter Karen, a schoolteacher, or his son John, a lighting expert agreed to take him up to Swarthmore. They both had to back out when a September date was announced. John would be back working in Wyoming and Karen would be teaching. Walt’s ties to Swarthmore are stronger than most. He grew up there, married his high school sweetheart in a local church, and raised his family there, living about a block from my boyhood home. He badly wanted to make the trip while he still was able.

Longtime Chief of the Swarthmore Volunteer Fire Company Larry Luder presents Walt with a souvenir. Walt volunteered as a teenager and later as a young family man. Luder and Bill Titus, at right, served with Walt as teenage volunteers. Thereis tremendous pride and esprit de corps in this organization.

Walt mentioned his disappointment to Jodie, who regularly visits him with her family. “When Walter told me of the trip and that he wasn’t going because he had no one to take him, I volunteered,” said Jodie. The result was a whirlwind three-day odyssey of about 1,500 miles. “We went up on Friday, and returned on Sunday,” said Jodie, “Saturday was a busy day, with a tour (arranged by daughter, Karen) of Swarthmore in the morning and the reunion [at West Chester] in the afternoon.” It was exhausting, but exhilarating for Walt. “We were both overwhelmed with the attention and warmth with which Walter was received,” said Jodie. On the trip back, Walt turned to Jodie and communicated a question, which must have been perplexing to him. “Why do you like me?” he asked. “Because with all your problems you still enjoy life,” she replied.

After it was over, the shared impressions among the rest of us were that we had witnessed an extraordinary and inspirational act of courage and determination. Against all odds, Walt had come home. Only those of us who grew up together in Swarthmore could understand the depth of the longing that had brought him back.