A Christmas Salute to Veterans 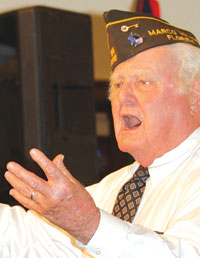 Herb Savage ended the evening, leading all in the singing of “God Bless America.” PHOTO BY NATALIE STROM

It was a night held in honor of those who have served our country. Veterans from World War II, Korea, Vietnam and our current wars gathered at the Rose History Auditorium at the Marco Island Historical Museum to be celebrated for fighting for our nation’s freedom.

A part of the Christmas Island Style event, the evening’s chairman and emcee was Eddie Adams. A prayer was said by Father Bennett at the beginning of the evening, after which Adams introduced a number of speakers.

Former Marco Island VFW Post Commander Dave Gardner recognized local World War II veterans who passed away in the last year. Chairman of Christmas Island Style, Steve Stefanides, spoke on what it meant to be free; how we are all here today thanks to the efforts of the “Greatest Generation” and those who served after them and those who are currently protecting our country.

The keynote speaker for the evening was Vietnam POW veteran Wayne Ogden Smith. Held in the “Hanoi Hilton,” a POW prison, for over five years, Smith was able 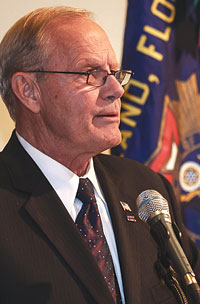 Keynote speaker Wayne Ogden Smith spoke of his experience as a POW during the Vietnam War. PHOTO BY FRANK STEIGER

to stay strong through communication with other prisoners via an invented tapping system on the walls. He was imprisoned with John McCain, who he watched arrive with two broken arms and a shattered leg. He watched as the enemy rebroke McCain’s arms as torture methods, but the soldier always came back and tried his best to give everyone a thumbs up.

Smith shared a statement by an anonymous writer etched on a wall in the prison: “Freedom has a taste to those who fight and almost die that the protected will never know.”

Many veterans nodded their heads in agreement and solidarity as others could only imagine the horrors faced by those who have kept and and continue to keep our country safe.

Smith’s positive words of perseverance and brotherhood left the audience cheerful, just in time for the upbeat songs performed by the New Life Church choir and band.

World War II veteran Herb Savage ended the evening in his usual fashion. Along with his wife Emily, Herb led the crowd a bright and cheery singing of “God Bless America.”