A Chef Among Chefs 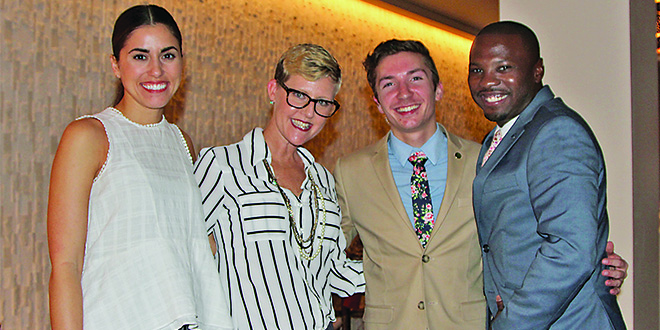 Gerald Sombright’s national television debut may not have yielded the desired result, but the irrepressible Marco resident is anything but dejected.

“I was very OK with it actually,” said the chef de cuisine at the Marco Island Marriott’s Ario, of being the first contestant cut from the competitive cooking, reality show “Top Chef.” His exit played out during the Bravo network program’s Dec. 1 premier.

Sombright is satisfied with the knowledge that he spared no effort in a setting involving 15 other highly skilled contestants, their abilities judged by a foursome of the crème de la crème of America’s culinary industry.

“If you know that you gave it your all, the critique of four people is not necessarily going to crush you,” he said. “It was the experience of a lifetime for a chef because there aren’t many chefs who can say that they stepped up to the plate to do this. To be chosen from the thousands who applied is amazing.”

Now in its 14th year, “Top Chef” features chefs demonstrating their skills in an assortment of culinary challenges, with one or more contestants eliminated in each episode. This season’s top finisher will receive $125,000 cash prize, a feature in FOOD & WINE magazine, a showcase at the annual FOOD & WINE Classic in Aspen, Colo., and the honor of serving their winning dish at the James Beard House in New York City. 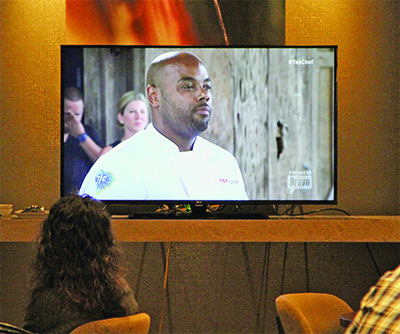 new “Top Chef” contestants. For the first time, the show is pitting “first-timers” against eight chefs from previous seasons who haven’t won the competition.

The episodes were filmed during June in Charleston, S.C.

The Marriott held a small viewing party at Ario for the show’s season debut that was highlighted by a buffet comprised of some of Sombright’s creations. The menu included such delectables as flounder and oka ceviche, beet juice-fed oysters, tobacco and bourbon infused New York strip, and cheddar cheese dusted chicharone and caviar.

After the introduction of judges and contestants, the competition commenced with the first task, a Sudden Death Quickfire challenge that required the chefs to create up to three dishes in 60 minutes using a main ingredient hidden from their view. The contestants were split into equal groups, newcomers and veterans, and the last place finishers from each had to meet in a cook-off, with the loser going home.

For this challenge, contestants uncovered the mystery before them, a whole chicken, and then went to work once the show’s host, Padma Lakshmi, gave permission.

Sombright initially had three grandiose ideas, but quickly distilled them into one, buttermilk poached chicken, with sautéed vegetables and chicken au jus. But the judges: Tom Colicchio, Gail Simmons and Graham Elliott, deemed the dish to be their least favorite among the newcomers.

Next, he met John Tesar of Dallas in a timed cook-off, both fighting to avoid elimination. Once again, their main 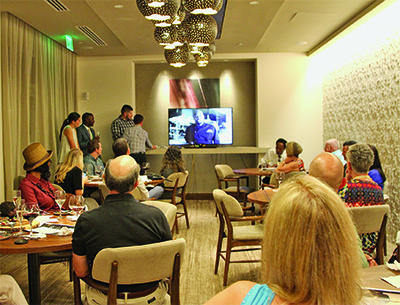 ingredient, oysters, in this case, was not revealed until the last moment. Sombright’s fire-roasted oysters with Thai style mignotte, and tomato compote and micro cilantro failed to win the judges’ favor.

Nonetheless, the experience was positive on multiple levels for the St. Louis native, who learned a lot about himself through competing in the challenges.

“I gained a deeper knowledge of myself from having to figure out how to manage anxiety and adrenalin at the same time,” said Sombright. “I also gained a real respect for what I can do when put in certain circumstances, like how to be create quickly and what dish speaks to you and you can put on a plate in one hour’s time.”

Sombright said the highlight of his time on the show was simply getting to share time and become friends with fellow contestants, whom he described as being “such amazing human beings. Being able to have those bonds and to be regarded as a colleague and being in a group of people like that was really the highlight for me.”

But his “Top Chef” journey may not be over.

The second episode of “Top Chef” airs on Dec. 8 and directly following it, at 11 PM, is BravoTV.com’s sixth season of the digital video series “Top Chef: Last Chance Kitchen.” The show has eliminated chefs face-off to compete for redemption and a spot back in the “Top Chef” finale.

Sombright will be a contestant in the premier episode against whomever is eliminated from episode two of  “Top Chef.”