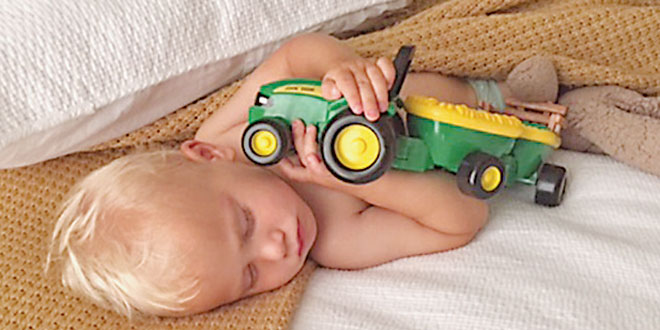 Howie, napping with his tractor.

A couple of weeks ago my husband and I flew to Iowa for a long weekend. The agenda was full. We were celebrating two birthdays, a baptism and two family reunions in the span of two days. And while it was exciting to know I would see my kids, grandkids, mom, siblings and assorted nieces, nephews and cousins, I was anticipating my first full day in town most of all. On that day I had volunteered to take care of three of our grandsons for the day. That would be two boys about to turn 4 and an unpredictable 2-year-old.

We arrived on a Thursday afternoon and I made a quick dash to the grocery store to pick up the necessities. A few years ago we bought a small condo in our hometown. It’s a simple two-bedroom, two bath unit that cost less than most cars here on Marco, but it provides us a place to land on our frequent visits, and a gathering spot for our family. When I’m in town I like to cook most meals and bake a lot of cookies which serve as incentive for the big kids as well as the little ones. On Thursday night I made tacos which would seem to be too much information but is oddly significant to the rest of this story.

In anticipation of the day I got to spend alone with my grandsons, I thought up activities that would keep them occupied. Without a vehicle that accommodates the three car seats it would take to transport the boys, we were grounded to the condo or a destination within walking distance. I made plans to build a fort in the living room, which we did, shortly after they arrived. They crawled under it, relocated it, tore it apart and rebuilt it at least three times, and were bored with the whole concept in less than 15 minutes. Instead, our grandson Boone made a boat out of a serving tray. The tray sits on an ottoman and is a “catch all” for the TV remote and newspapers. But in Boone’s mind, this 18” X 24” platter was floating on an imaginary sea and I thought it was really cute until he invited me to join him. “Nana!” he said, “come sit in my boat with me!”

I looked at the small space that already held Boone, a stick flag, and a few toy cars and decided it was going to be a challenge for me to step aboard without difficulty. There must have been just enough hesitation on my part to trigger Boone’s next comment. “Nana, how big is your butt?”

Now the funny part here is that it wasn’t my backside I was concerned about, although Boone had legitimate cause for concern. My hesitation had more to do with my legs that don’t fold as compactly as they once did. So to prove my point I sat my whole butt in the boat/tray behind Boone with my legs hanging over the side and we sailed on an imaginary journey through the living room.

From there I took the boys on a short walk to a nearby playground to run off some steam. My sister decided to join us for this adventure and she brought along her phone loaded with Pokémon Go. In case you haven’t heard about the Pokémon craze, it’s an app that shows little cartoon critters who pop up in all sorts of places. On the screen of your phone, you locate the critter and throw an imaginary Poké Ball at it to score points. Or something like that. I’ve never played but my sister was a big hit with my grandson, Penn. So our short walk to the park took a considerable amount of time and it was lunch and nap time when we returned to the condo.

The unpredictable 2-year-old is named Howie. He is the exact replica of his daddy who was a very unpredictable 2-year-old himself. Howie prefers things in his life to follow the order of his choosing, and he did not choose to take a nap at Nana’s condo. He had a bit of a meltdown; working up a sweat and crying big tears. One thing Howie does like is tractors. So after several failed attempts to lay Howie down, I scooped up a tractor for comfort and 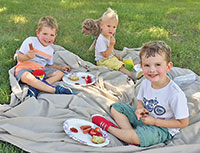 A picnic lunch in the shade with Boone, Howie and Penn. Photos by Laurie Kasperbauer

I held him tight to my chest. Then we laid down together; me, Howie, the tractor and the tears, and he fell asleep. And as I lay there awake with this little boy tucked in close, I decided that no matter what happened the rest of the weekend, the trip was worth it for that moment when Howie fell asleep in my arms.

That night, the parents came to collect the kids and we ordered pizza for dinner. It was an early night and the kids scattered to rest up for the big day that followed: breakfast at the condo, lunch and a birthday party, followed by a trip to my mom’s house for the first reunion and more eating.

My husband and I woke early Saturday morning with stomachs that roiled and headaches that gained quick momentum. I went ahead and made two coffee cakes in anticipation of our family’s arrival for breakfast, and once the cakes were out of the oven I texted the kids to let them know it was time to come over. The first text back was from our son. “We’re sick.” He said. They had been up all night fighting for space in the bathroom. Our daughter responded similarly. Their two boys had showed the first signs of sickness shortly after they left us the night before. It was the pizza, I decided.

That day, we continued with our plans at half speed. The birthdays were celebrated, but the enthusiasm was tempered. It was decided that those who ate pizza were not all sick, but everyone who had eaten my tacos fell ill 24 hours later. Was it the taco meat? The lettuce? Bad cheese?

That night we continued on to my mother’s house for a reunion with my siblings and their families. Some of us ate, others avoided the smell of food. And while we weren’t the best company, we blamed our delicate state on the tacos we had consumed nearly 48 hours earlier.

On Sunday morning we attended church where our youngest grandchild was baptized. We met with our son-in-law’s family and many acquaintances from our old place of worship. We shook hands, we hugged friends and we continued to curse the taco meat that made us feel so awful. That afternoon we completed our weekend at a massive reunion of my mother’s family. The extended family numbered more than 100 aunts, uncles, cousins and other assorted relatives. I hugged them. I leaned in close to hear funny stories above the din of lively conversation and laughter. And I chastised myself for not browning the hamburger long enough to kill the bacteria that unleashed itself on my family.

It wasn’t until that afternoon when our son-in-law got sick on his four hour drive home that our taco theory was regurgitated on the side of the road. He wasn’t with us for taco or for pizza. Obligations made him late to the party and the only thing he was exposed to was us. A few hours later my sister caught the bug. Then her son. And my brother.

Early Monday morning my husband and I ducked out of town. We caught our flight home weighing a few pounds less than when our journey began. No one knows where the “bug” originated, but it’s toxin spread far and wide in a very short span of time. And I thought of all the people I encountered that weekend. Family I haven’t seen in years. All the hugs and the handshakes and the crowed spaces. I felt guilt for unknowingly perpetuating sickness on the unsuspecting. But at the same time I realized that it was more than a virus that ran rampant that weekend. There was love and happiness; there was acceptance without judgement, at every gathering.

At the end of the day these are the memories that stay with me. I held babies, I hugged my brothers. I laughed with cousins and I ate tacos with my kids. I sat in a serving tray boat. And I held my grandson while he napped.

Bug or no bug, it was worth it.