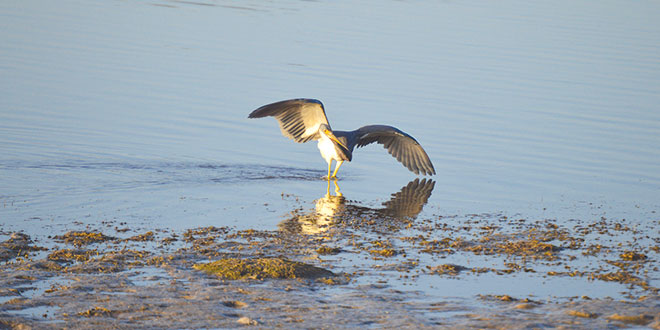 This tricolored heron is feeding in ideal python habitat. PHOTO BY BOB MCCONVILLE

“Okay, can you describe it?”

“Yes. It looks to be about 6-feet-long, dark brown with black spots and about 3 inches thick.”

“Do the spots connect? Do they touch each other? Tell me about the markings on the head.”

“The spots a giraffe-like. They do not touch. The head markings look like a dark arrowhead with a lighter line in the center.”

“Sounds like you’ve got a Burmese python! Get on the phone and dial 1-888-IVE-GOT1. Give them your GPS coordinates, the closest street intersection or a mile marker on the road. Nice job!”

Calls like this are becoming more and more commonplace in our area. There’s been an invasion in South Florida, and the invaders are here to stay. There is a lot of speculation about how they got here, but several python species as well as anacondas and boas are being seen in the Everglades and surrounding communities.

How did they get here? Let’s say that someone went to a pet store 10 years ago and purchased a cute little snake to have as a pet. After feeding this pet a diet of rats or frozen mice for a few years, little “cutesie” has grown from a 2-foot toy into an 8-foot monster — too big to keep in the house. So what happens now? I know!!! Snakes enjoy jungle-like terrain! Let’s set them loose in the ‘Glades!

Is this a far-fetched idea? Not really. After all, 700 monkeys have been captured in Florida in the last decade, and there are still an estimated 1,000 on the prowl out there. Fish that outgrow their aquariums are often just released into the wild as well. So, it is not such a wild concept that many species are adapting in our area.

How many burmese pythons are there in Florida? I’ve spoken with authorities who estimate these numbers anywhere between 15,000 and 150,000, and the population is growing exponentially according to some.

This does not take into consideration those pythons that do not reach maturity. I hear that baby pythons are great snacks for gators as well. Speaking of snacks, these Burmese python have become a dominant predator. Captured snakes that are dissected have produced some interesting content. Everything from egrets and herons, possums and raccoons, deer and rabbits, and even alligators have been found in these guys. One captured snake reached 18 feet in length!

Even though pythons were primarily found in the East Everglades years ago, their territory is expanding, and it only makes sense. Some areas monitored for wildlife have seen populations of raccoons and possum decrease by more than 90 percent. As food becomes more scarce the pythons will travel. Their numbers have increased and sightings have been recorded as far north as Port St. Lucie on the East coast and Tampa here on the West coast. Since they are mainly a tropical or sub-tropical species, they may not venture too much further north. However, it is not always the fastest or strongest species that survive — it is the ones most adaptable to change. A stepping stone for pythons? Only time will tell.

Join me next addition when I interview a python expert and hear what a seasoned veteran thinks of this dilemma.

Bob is the owner of Steppingstone Ecotours and a member of the Dolphin Explorer’s 10,000 Island Dolphin Survey Project. He is also a member of Florida SEE (Society for Ethical Ecotourism). Bob loves his wife very much!