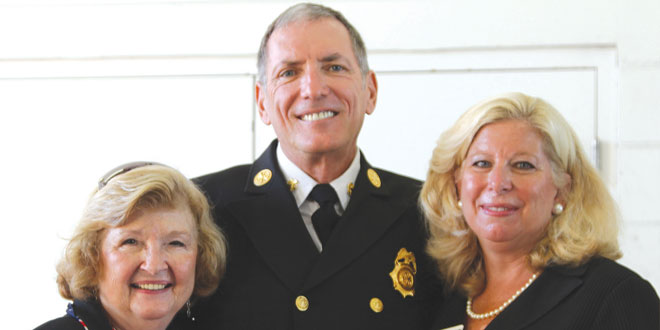 A video presentation was shown and offered a look at the 9-11 events from the air. The documentary, a production of the Military Channel, included recordings from traffic control towers and the order to scramble from Langley Air Force base. 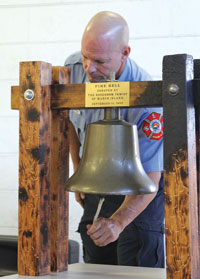 It was an informative and touching presentation.

Chief Murphy spoke about the number of casualties of the September 11 attacks: 2,977 perished, including 246 people aboard the four planes, 125 in the Pentagon, 2,606 in the towers and on the ground, and 343 firefighters, 37 Port Authority Police officers and 15 EMT’s.

Chief Murphy read the 9/11 First Responders Prayer below which was followed by a Ringing of the Bell ceremony. It is performed in memory of those firemen who have lost their lives. This particular bell, rung by Pat O’Gorman, was donated by Ruth Roseboom in memory of her husband.

When They were called to duty,

A video presentation on September 11th events from the perspective of air traffic control.

God
On 911 those flames did rage,
You gave those first responders
The strength to save a life
No matter what their age.
You let them embrace a little child
Before it was too late
And save so many thousands from
The horror of that fate.
You Enabled them to be alert
And hear the weakest shout,
And quickly and efficiently
Help those people out.
They did fulfill their calling
To give the best they could,
To save a perfect stranger.
It was their job.
They Understood
And in according to your will,
While on duty they answered death’s call;
Please Bless with your protecting hand,
Their families, one and all.