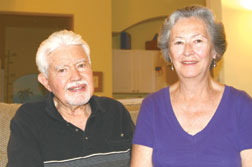 Owen and Patt Carr at home on Marco. SUBMITTED PHOTOS

Why would you want to be a member of the Masons? That is a question asked Owen Carr, a long-time Marco Island resident. Owen recently celebrated 65 years of being in the brotherhood of Masons! To bestow the honors, a formal ceremony was held recognizing this membership benchmark at the Cypress Lodge in Naples. His wife, Pat, and two other couples were in attendance as well as many fraternity brothers. After a sit down dinner in the lodge they were invited into the main hall to witness the presentation.

Owen has a strong belief in the positive attributes of the Masons, so much so, he continued his membership through years of living in foreign countries. He celebrated his 50th year membership in Singapore. The highly respected formal event required tuxedos and white glove attire. In Phuket, Thailand, Owen and Pat attended luncheons of the Square and Compass Club. Owen commented that Masons are told in meetings to ‘practice kindness and helpfulness with all mankind but more especially with 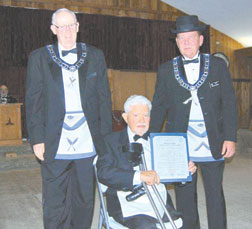 their brethren in Masonry.’

At age 21, Owen was a World War II amputee veteran. His good friend, Rio G. “King” Lucas was a Mason, as was King’s father. They sponsored Owen to become a member of their Masonic Lodge. As an amputee, Owen had to obtain a special dispensation from the Grand Lodge of Colorado.

Through King and his father, Owen made application to join Schiller Lodge in Denver, Colorado, and paid a fee which was used to fully investigate his character.

Many people are familiar with the term Free Mason which is, after all, an ancient brotherhood, but most don’t know how many different Masonic bodies 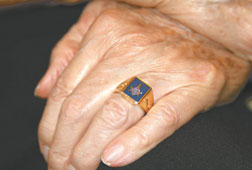 This ring replaces one given to Owen by his mother and lost in the sea.

So, what do Masons do? Masons are a philanthropic group supporting many causes and most well known for their support of 22 Shriner’s Hospitals for Children. The Florida Mason’s “flagship” charity is the Masonic Medical Research Laboratory, which is dedicated to cardiac research.

Masons typically do not publicize their efforts, a practice creating an air of mystery around them. As a basic tenet, Masons must believe in a Supreme Being and strive to emulate four virtues: temperance, fortitude, prudence and justice. Principles of the brotherhood include brotherly love, relief and truth.

The Schiller and Cypress Lodges wish Owen many more years of membership! For information on membership or Masonic Charities, please contact Cypress Lodge No. 295 at 239-597-3030 or cy press295@comcast.net. Visiting Brethren are always welcome!