Coming together as a group of 16 friends back in 1966, the Marco Island Woman’s Club was chartered in an effort to fill a void and provide the fledgling community with an organization that women could rally around to provide needed philanthropy.

Fifty years later that basic philosophy of civic involvement continues, as the organization and its 200 members work on various community projects that include a wide spectrum of activities and charities.

Often focused on education, the group spearheaded efforts to bring a public library to the island, and supported the Marco Island 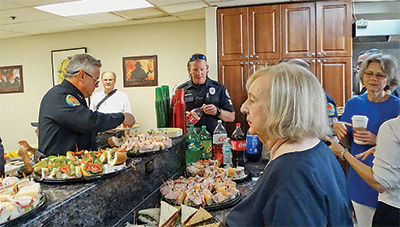 First responders enjoy the luncheon in their honor

The group is also quite patriotic, and has helped to fund some of the amenities at the Veterans Memorial site and Veterans Community Park.

In a recent gathering, before celebrating their 50th anniversary, the group first celebrated our island’s first responders. Lorraine Rogers headed that project, but was quick to shun the limelight. Instead, she turned 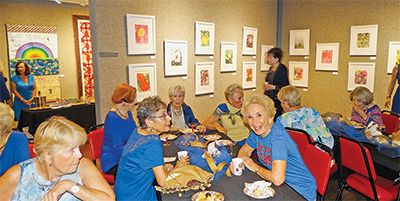 the discussion to those they would honor.

“When we are in need on the island these professionals are the first to come to our aid, and we wanted to do something nice for them,” said Rogers.

Following the first responders’ luncheon, the group adjourned from the fire station and took a short break before reconvening at the Marco Island Center for the Arts. It was there that they joined approximately 100 of their members. Woman’s Club members enjoyed some light refreshments, listened to music by a string quartet, and celebrated the spirit of their organization and its 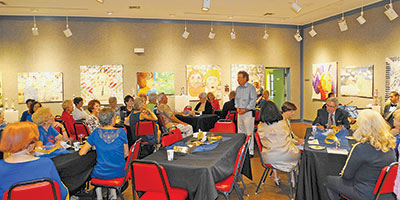 City Manager Roger Hernstadt thanks the Woman’s Club for their contributions that make Marco a better place.

accomplishments over the last half-century.

Jacquelyn Pierce, president of the club addressed the group and thanked them for their commitment to the original values, which the organization has stayed true to over the last 50 years. They also heard from City Manager Roger Hernstadt, who complimented them for being such a positive influence in the community.

With a broad smile and twinkle in her eye, Pierce told a couple of the women that she was looking forward to seeing them at the 100 year celebration of the organization, and was excited to see what they could get accomplished in these next 50 years.