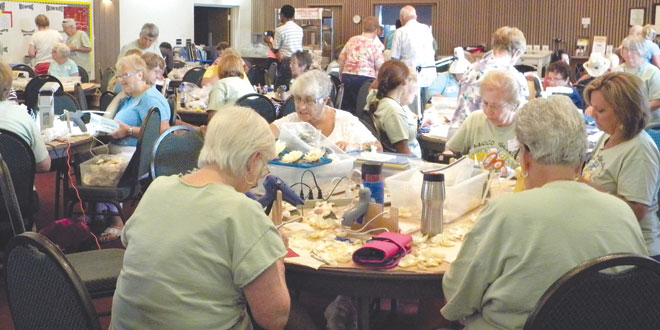 Tables were filled at a recent Tuesday workshop. PHOTOS BY MELINDA GRAY

Each year, scholarships are awarded in conservation and education in line with the club’s mission statement: “To promote the study, conservation, science, history and appreciation of seashells and mollusks in all their forms.” The scholarships to Florida Gulf Coast University and the University of South Florida will depend largely on proceeds from the upcoming Shell Show.

“The ladies and gentlemen come together and work very hard on these crafts in order to promote and support scholarships in education and conservation,” said Marsha Purnetti, club president.

In a show of their gratitude, students recognized and awarded by the club’s research grants will present their findings at the event. 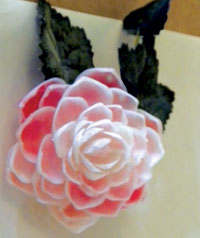 My first creation was a shell rose.

sold at the show. I attended one of these workshops, and made my own shell craft to contribute and learn more about the club and what they do. I was delighted to see just how many woman and men come out each week to give so much of their time and talent to the club. Even as a life-long crafter, the intricate detail involved in, and delicate nature of, shell crafts surprised me.

Shells of all shapes, sizes and colors are abundant on Marco Island. Kathy Ferrier, the extremely patient instructor who showed me the ropes, said she loves shelling and wanted to learn some creative ways to use the shells she collected.

“Not only is it fun for us, it’s also a worthwhile cause,” said Ferrier.