The United States Marine Corps turned 236 on November 10, 2011, and my wife and I had the honor and privilege of attending the Commandant’s Birthday Ball at the Gaylord National Hotel & Convention Center on the historic Potomac River in Washington, DC. We were the invited guests of our daughter Major Suzan Thompson and our son-in-law Major Gary Thompson. This was a black-tie event for the civilians and evening dress or dress blues for all the Marines who were attending the ball. It was a picture perfect Washington, DC fall evening, a bit chilly for us Floridians. A bright orange full moon accompanied us all the way to the venue. The lobby was overflowing with Marines of all ages, standing tall in their magnificent uniforms, guests from across all services, officers from other countries all there to enjoy this unique evening with their families, friends, comrades and distinguished guests.

The tradition of the Birthday Ball goes back to the vision and commitment of the famous 13th Commandant, John A. Lejeune, who in 1921, issued Marine Corps Order No. 47, Series 1921. Gen. Lejeune’s order summarized the history, mission, and tradition of the Corps. It further directed that the order be read to all Marines on 10 November of each year to honor the founding of the Marine Corps. Thereafter, 10 November became a unique day for U.S. Marines throughout the world. Soon, some Marine commands began to not only honor the birthday, but celebrate it. The first “formal” Birthday Ball took place on Philadelphia in 1925. Guests included the Commandant, the Secretary of War (in 1925 the term “politically correct” didn’t 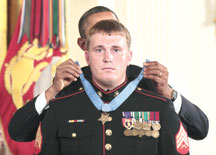 Receiving the medal of honor.

In 1952 the Commandant, Gen. Lemuel C. Shepherd Jr., formalized the cake-cutting ceremony and other traditional observances. For example, Marine Corps policy now mandates that the first piece of cake must be presented to the oldest U.S. Marine present. The second piece goes to the youngest Marine. Among the many such mandates is a solemn reading of the Commandant’s birthday message to the Corps.

All 3000 Marines and guests were asked to take their seats around 8:00PM the ceremonies started with a message from the Commandant of the Marine Corps. General James F. Amos’ message was solemn and right to the point. He emphasized the fact that for the last 10 years the Corps has been engaged in continuous combat operations against those who threatened the security of the United Sates along with conducting operations around the world which included humanitarian disaster relief, counter-piracy, theater security operations, special operations, counter-insurgency and many more. He summarized by saying “Our rich heritage of selfless service and fidelity to Nation and to one another lives on in all who currently wear the Eagle, Globe and Anchor – those who have answered the clarion call to duty with remarkable courage, dedication and unshakable resolve that Marines are so well known for.”

After the Commandant’s speech, we were treated to a live concert by the United States Marine Drum and Bugle Corps followed by the singing of the National Anthem. I do not recall singing our National Anthem more enthusiastically and with more passion than this evening standing tall between Corporals, Sergeants, 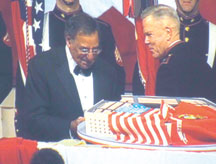 Majors, Colonels and Generals. Following the reading of General Lejeune’s historic birthday message, Secretary of State Leon Panetta was asked to join the Commandant who cut the cake, handing the first piece to the Secretary, followed by the oldest Marine present who then presented it to the youngest Marine, a 21 year old female First Lieutenant from Quantico.

After some further remarks, Secretary of defense Leon Panetta gave a very inspirational speech; going back to his roots as a first generation Italian-American whose family arrived in the United States for the sole purpose of giving their children a better life and better opportunities for success in America.

When all the speeches were over, dinner was served. During dinner I had a chance to talk to various Marines and their families who were at my table and got an insight as to how these young families handle long separations when their loved ones are in harm’s way thousands of miles away. As the coffee was being served, there was a commotion right next to my table. I looked up and came face to face with former Marine Dakota Meyer.

As it usually happens at moments like this, my camera was nowhere to be seen and all I could do was to stand up and shake this unassuming Marine’s hand and thank him for his service. And what a grip that was! This down-to-earth farm boy is the first living Marine to receive the Medal of Honor for heroism in the wars in Afghanistan and Iraq. This former Marine sergeant who insists he is not a hero, repeatedly rushed into heavy enemy fire in an attempt to rescue 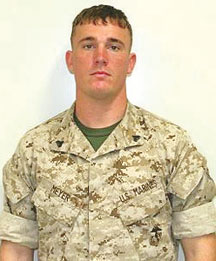 four missing U.S. service members pinned down in an intense hours-long ambush in eastern Afghanistan despite receiving orders not to do so. Fighting through a piece of shrapnel that had injured his arm, Meyer later reached the four only to find that they had died in the fighting. President Obama described the 23 year old Meyer as representing “the best of a generation that has served with distinction through a decade of war.” His actions will forever represent the “Dakota Meyer Moment” and hopefully inspire others to think there are more noble things in life than to only think about your own best interests. And there I was, standing next to this young man, shaking his hand and thanking him for his service to our country. But then, as far as I am concerned every single member of the Marine Corps or any other service who ever put on a uniform and unselfishly served to make this country what it is; is a hero.

The wonderful evening finally came to an end and we said our goodbyes to those wonderful men and women. As we drove back home near midnight, every one of us in the car had in our hands as a souvenir a small replica of the U.S. Marine Corps Officer’s Mameluke sword which will be on our desks forever, as a reminder of this wonderful evening and all our heroes who make our country safe and great for all of us. “God Bless America” means so much more when you are in the company of heroes.