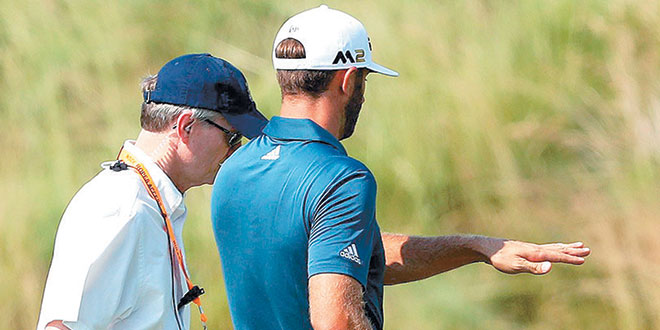 I hope everyone got a chance to watch some of Sunday’s US Open coverage at Oakmont Country Club.  Dustin Johnson showed why most of the golf world believes he is the most talented golfer playing the game today.  His ability to drive the golf ball long and straight gives him a superior advantage over most of the field.  Dustin has had multiple disappointing finishes in major championships, but he was more than up to the challenge at Oakmont.  Congrats to Dustin, and his whole team.

With that being said, those who watched understand that unfortunately the big story was the USGA’s ruling of Dustin Johnson’s ball moving on the 5th hole, and the decision to postpone the final ruling until after the round.

Dustin called over a rules official/referee after his ball moved.  He explained the situation, the referee asked Dustin if he had influenced the movement of the golf ball in any way.  Dustin answered no.  The referee ruled that no penalty would occur, and the group could recommence play.

On the 12th tee two of the USGA rules committee members approached Dustin, and told him the video evidence shows that there is a possibility 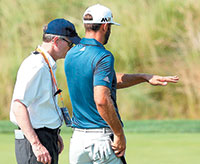 Submitted PhotosDustin Johnson speaking with the assigned USGA referee for his group about the golf ball moving while he was in the process of address the golf ball. The referee would later have his decision, that Dustin would receive no penalty, over turned.

that he could occur a penalty shot based on the video evidence they have.  However, they would wait until after the round, review the evidence with him, and make a decision at that time.

Meeting with the player after the round to make a decision on a ruling, which deals with video evidence, is standard for the USGA.  They did not take into consideration IT WAS THE LAST ROUND, AND THE SECOND TO LAST GROUP OF THE US OPEN!

After the round the USGA approached Dustin about the evidence, and told him they think it should be a one shot penalty, because the video evidence shows it was “more probable than not” he influenced the movement of the ball. Dustin’s response was priceless, “OK, whatever. Let’s just get on with the prize presentation”.  A quote made public by Lee Westwood in Golf Digest days later.  Lee played with Dustin in the last round of the US Open, and had a front row seat for all the drama.  The ruling would not have influenced the outcome of the event either way.  Dustin had won by four shots before the penalty shot was assessed.

The USGA came out the

Mike Davis, CEO and President of the USGA, taking questions after the 2016 US Open.

very next day with a statement that expressed their regret on how the ruling was handled, but no apology on the ruling itself.  The USGA took an absolute beating on social media, and TV outlets after the event was over, and even more of a beating after they released the statement the next day.

How any human/USGA official believes they can determine probability of a ball moving without it being touched is egotistic in my opinion.  The golf ball was on an uphill slope, there is a breeze, the greens are as fast as a glass table, and somehow they can determine that setting a putter beside the ball was equal to or above a 51% chance the action caused it to move.  Leaving grey areas in the rules for human error means that errors in judgement are possible, and this error came at a really bad time.

Hopefully the USGA can learn from their error.  The first step to positive progress is making the golf rules decision/writing process more inclusive.  We need more than the R&A, USGA, and 100 lawyer consultants writing the rules.  We do not need statement in the rule like, “more probable than not”.  We then could strive for rules that are easier to understand, and have no grey areas.

Todd Elliott is the Head Golf Professional at Hideaway Beach Club on Marco Island, Florida. Todd is a PGA and CMAA member. Todd is Titleist Performance Institute Level 3 Golf Certified. To contact Todd email him telliott@hideawaybeachclub.org, or on Twitter @elliottgolfpro.