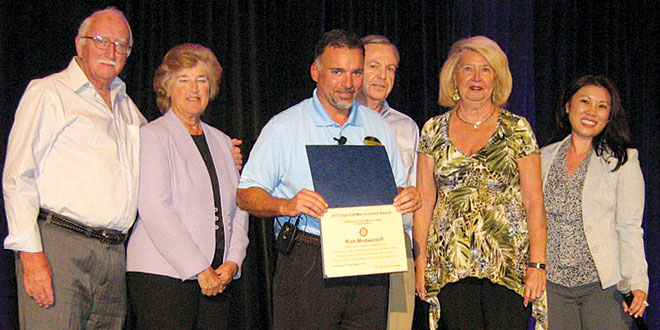 The Rotary Club of Marco Island is proud to announce that Keith Dameron, Vice President of Iberia Bank; Rick Medwedeff, General Manager of the Marco Island Marriott Beach Resort; and Barb and Lou Prigge were selected as recipients of the 2013 Spirit of Marco Island Award. A final recipient for 2013 will be announced in the coming week.

Keith Dameron was surprised by the presentation in front of over 100 people at a recent Men’s Club meeting at Mackle Park where he was the guest speaker.

Ian Small of the Noontime Rotary Club made the presentation to the delight of the audience members, noting that Mr. Dameron has been actively involved in the community through numerous organizations that have included the Veterans Memorial Committee, Marco “Big Flag” Committee and the Marco Island Police Foundation as well as leading many bank sponsored community events such as Iberia Bank’s “In the Round” lecture series and “Shred Parties.”

Rick Medwedeff was also surprised with his award in front of a large group of Marriott team members at a recent Award Function. 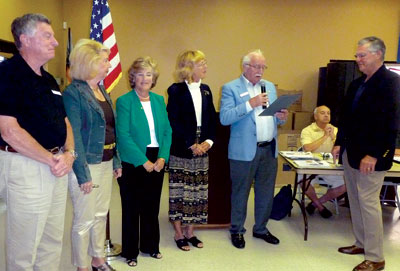 the President of the Rotary Club of Marco Island made the presentation and acknowledged Medwedeff and the Marco Island Marriott Beach Resort and Spa for its many contributions to the community.

Medwedeff has been personally involved with the American Cancer Society as well as several other community organizations over the years. In addition, Medwedeff and the Marriott were recognized for their generous support of all three Marco Island schools and the YMCA. In 2012, the Marriott and its employees contributed over $130,000 to local causes through their own fundraising efforts and community involvement.

The latest recipients announced were Barb and Lou Prigge. The Prigges were presented with their award at a Kiwanis meeting in front of their fellow Kiwanians, as representatives of the Noontime Rotary Club made the announcement.

The Prigges were recognized for their contributions to our island community through their service in the Kiwanis Club as well as many other civic organizations. Lou is a member of the Knights of Columbus, having served as past Grand Knight and Faith Navigator. He is currently the Chairman of the City 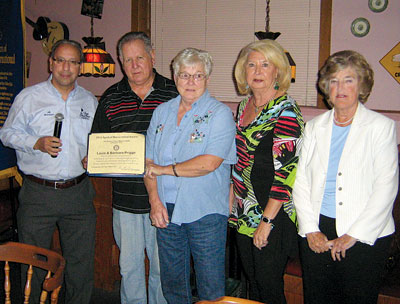 of Marco Island Code Enforcement Board, member of the Fire Rescue Foundation and Treasurer of the Police Foundation.

Barb is a past President and founding member of the San Marco Catholic Church Columbiettes and also a member of Bedtime Bundles, an organization that provides  basic needs for migrant children and their families. Both Barb and Lou are members of CERT the Certified Emergency Response Team for Marco Island.

The Prigges are probably best known in the community for festively decorating their North Collier Boulevard home for all the major holidays and opening it up for the community to enjoy.

This gala event recognizes individuals and organizations that are civically involved in the community through their contribution of time, talent and financial support to the community.

For more information and tickets for this event you may contact Al Diaz at 239-438-5285 or by email at royalmarcoway@marcocable.com.