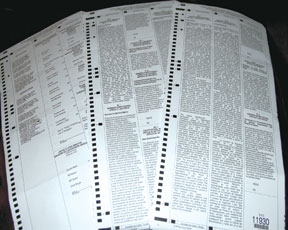 Within the 2012 General Election Ballot which is six pages, you’ll see the races most individuals are interested in casting their vote for: President, Vice-President, Senate, Congress, and County Commissioner. In addition to those races, numerous judges are included, as is the office of Sheriff. The nine candidates vying for four Marco Island City Council seats are listed. Even a seat on the Collier Mosquito Control is open to vote on. A question on whether the Collier County School District should reduce the capital millage and increase the operating millage by .25 mills for another four year period shows next.

The above is fairly straightforward. Florida voters will also be asked to vote on a number of proposed amendments to the state constitution. These amendments are written in heavy legalese, enough so that it would send the average voting citizen reeling. The issues addressed in the each amendment are complicated. Many voters are unaware of the amendments and what a yes, or no, vote would mean. Below is a simplified explanation of each amendment. You can find detailed explanations of each amendment at the Collier County Supervisor of Elections website www.Colliervotes.com. Click on the lower left-hand side “Constitutional Amendments.” Four alternate resources explaining what each amendment means is available there. Familiarize yourself with the ballot before going to the polls. Sample ballots are available now.

Adoption of any of these amendments would require 60 percent of the votes.

This would allow Florida to opt out of the Affordable Care Act, preventing penalties for not purchasing health care coverage.

This would expand the homestead exemption to combat disabled veterans who were not Florida residents when they joined the military.

This proposed amendment would reduce the annual growth in assessment limitation on certain non-homesteaded property from 10% to 5%. It would give out-of-state residents the benefit of the homestead tax exemption. It would also prohibit increases in assessed value when market value decreases.

This would require that Supreme Court justices appointed by the Governor must also be approved by the Senate. It would also allow the legislature to repeal a court order by a simple majority, rather than a 2/3 majority which is now the law.

Federal law today prohibits federal funding for most abortions. This amendment would put a prohibition in the state constitution. Another portion of the proposed amendment would prohibit the use of the Florida Constitution’s privacy clause in abortion cases.

Removed from ballot by Court Order.

It would repeal a 126 year old provision in the Florida Constitution that prohibits taxpayer funding of religious institutions, including schools.

This proposed amendment would grant homestead property tax exemptions to the surviving spouse of military veterans and first responders (i.e., police, fire rescue personnel, etc.) killed in the line of duty. The deceased must have been a Florida permanent resident as of January 1 in the year they died.

This exemption would raise the exemption for equipment and furniture used in business from the first $25,000 to $50,000. (Personal property is already exempt.)

This proposed amendment would grant full homestead property tax relief to low-income seniors who have lived in their homes for at least 25 years.

The Florida university system is governed by a 17 member board. Under existing law the president of the Florida Student Association is a member of the board. This proposed amendment would create a new council of student body presidents, and the chair of that council would become the representative on the Board of Governors.

As of October 17, Paul Meyer has exited the race for City Council. According to Supervisor of Elections, Jennifer Edwards, any votes for Meyer will not be counted.

Voters may submit absentee requests online via the CollierVotes.com web page, by phone or in person to the Supervisor of Elections office. A voter’s immediate family member can also make the request. The deadline to request a General Election absentee ballot to be delivered by mail is October 31st at 5:00pm.

• Voted ballots returned by mail require postage of 65 cents. Voted ballots can also be dropped off at the main Elections office in the Collier Government Complex or the Orange Blossom branch office.

• Voters must use the official, white, ballot return envelope and personally sign where indicated on the outside of the envelope.

• After marking the absentee ballot in pencil, black or blue pen, voters should place the ballot pages inside the enclosed green secrecy sleeve (also referred to as a secrecy envelope), however, the lack of a secrecy sleeve or envelope DOES NOT invalidate a ballot.

• Voters can track their returned absentee ballot, or find out when their requested ballot was mailed, online at the CollierVotes.com “Am I Registered” web page.

All supervisors of elections must hold early voting in their main and branch offices.

Identification at the Polls

State law requires a person to bring photo and signature identification before a person can vote.

The acceptable forms of identification are:

However, if a person does not bring an acceptable form of identification, the person can still vote a provisional ballot.

Jennifer J. Edwards is our Supervisor of Elections.