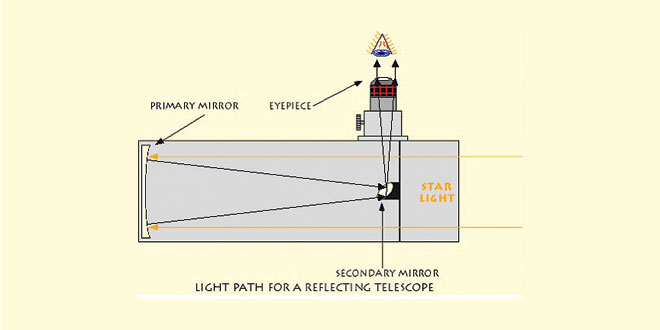 Last month, I announced the completion of my new home-built 20-inch telescope. This month, we will discuss how it’s put together. I’m not going to give any fine details. Those will be found in a 475-page book called The Dobsonian Telescope, available from Amazon.com.

First of all, this telescope is a reflector; virtually all really large telescopes are reflectors. The Hubble, for example, is a reflector. Mine is of the style known as a Newtonian, invented more than 300 years ago by none other than Sir Isaac Newton. There is a large parabolic mirror located at the bottom of the telescope, a distant cousin of a common shaving mirror, and a much smaller secondary mirror located near the top. The secondary mirror is at a 45-degree angle and reflects the image of the primary mirror out through the focuser. (See diagram) The image is then magnified a convenient amount by an eyepiece, which is basically a fancy magnifying glass.

The primary mirror, secondary and focuser must be held rigidly an exact distance apart that can never vary so much as a millimeter no matter how the telescope is pointed. There are a number of ways to accomplish that; the way chosen depends on what exactly you want to do with the telescope. As my needs included giving bystanders a view and moving the telescope around in a pickup truck, I selected a truss-tube Dobsonian mount.

John Dobson invented the mount that bears his name slowly over a number of years. Others have slowly improved it over the past couple of decades until the 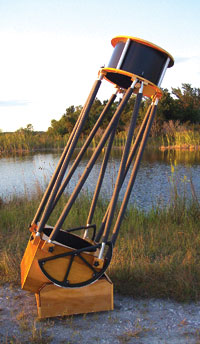 The 20-inch telescope at home in the Fakahatchee Strand. The telescope stands about nine feet tall when pointed straight up. Photo by Mike P. Usher

mount has reached it’s present state of development. The truss tube part in particular has become popular in the last 15 years or so. Aluminum tubing gives the telescope both lightness and rigidity, and allows for easy disassembly for transport. Usually the tubing is hidden behind a black cloth shroud that blocks light from coming in sideways.

The heart and the simplicity of the Dobsonian mount is in the bearings —constructed of Teflon and plastic countertop laminate, or in heavy telescopes like mine, glassboard. There are two sets of bearings, one for altitude and the other one is for azimuth (sideways motion). The altitude bearings are located underneath the half circles on the mirror box while the azimuth bearings are hidden under the bottom of the telescope. With the telescope perfectly balanced, a child can move the 197 pound telescope to point at any object in the sky with just one hand.

To answer the obvious question beginners ask, “How much does it magnify?”: the maximum theoretical magnification is about 1,000 power. The maximum useful magnification is much smaller, about 300, because of our thick unstable atmosphere. Most of the time, the practical limit is close to 200, and I actually spend about 80 percent of the time using less than 100. Objects in the sky are not particularly small; they are faint. That is where the large telescope size is useful. This telescope will easily reveal wonders 100 times fainter than binoculars.

If your non-profit organization would like to have a telescope viewing event for free by the Everglades Astronomical Society please contact Charlie at cpaul651@earthlink.net.