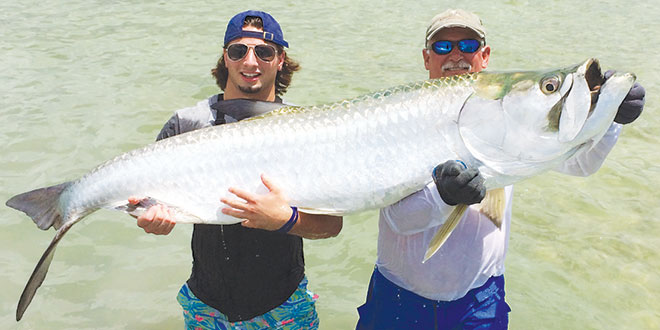 On June 25, 2015 a trio of guests from Randolph, NJ joined Captain Ted Naftal on board the Miss Nancy II for a day on the waters around Marco Island. Brother and sister Matt and Mattie Stark were joined by their grandfather Jim Grecco, with hopes of catching something good for dinner. Little did they know what was in store for them.

Not too far from the Rose Marina basin and working the sand bars and mangrove treelines, Mattie had a catfish for bait on her line.

Using 40 lb test line, she felt a pretty strong tug on her rod and attempted to set the hook on the unknown predator. She did it.

Once the fight was on, her brother Matt took over and the combo eventually brought the fighter to the side of the boat. Their prize… a 6 foot long, 150 pound tarpon, one of the most fun sport fishes to catch in our area!

These prehistoric monsters date back millions of years and they sure can provide a workout for any able-bodied fisherman. I can recall walking the 7 mile bridge in the Florida Keys and watching fishing boats below me hook into a tarpon. A small boat took nearly 45 minutes to bring one in, with the fish literally pulling the boat back and forth across the waterway.

Also known as the Silver King because of its size and color, the tarpon is extremely strong, has plenty of stamina and, therefore, is able to put up a battle for quite a long time. Since records are broken often and since many fishermen practice a “catch and release” program, it is not really clear about the largest tarpon ever caught in Florida but some stories tell “tails” that they can reach 8 feet in length and approach 300 pounds in weight.

One of the most beautiful sites to a fisherman is when

Sister and brother Mattie and Matt Stark show off their catch before releasing it back into the Marco river.

the Silver King breaks the surface, taking a huge leap out of the water. Coming to the surface in this manner may actually be a strategy for the tarpon. A unique feature of this fish is that it has a bladder. They have 4 gill arches on either side of the body and these are the major respiratory organ. This is utilized in the same manner as other fish. However, their bladder contains a spongy tissue and has a duct leading to the esophagus and the tarpon can fill this directly with air that is gulped at the surface. This definitely helps their stamina and fighting ability.

There are a lot of tarpon in the area right now. Although evidence exists that they may spawn year-round, the typical period for this activity is May thru July. They will migrate offshore and the currents will gently move the larvae to nurseries inshore. Amazingly, one female can be responsible for producing up to 12 million eggs.

One study by FWC showed that only about 37% of all hooked tarpon make it to the boat. Why so few? It all has to do with structural anatomy of the head. Unlike many small, fleshy fish, the silver king has an extremely boney head and just setting a hook into this behemoth is an accomplishment!

So congratulations, Matt and Mattie, for a job well done! What an exciting way to spend your time here in the Marco Island area! I’m sure your friends in New Jersey will not get tired of hearing about your adventure. Anyone else up for a challenge?

Captain Ted Naftal can be reached at 239-775-3344. The Miss Nancy II is docked at Rose Marina on Marco Island.

Bob is the owner of Stepping Stone Ecotours and a Naturalist on board the Dolphin Explorer. He is a member of Florida SEE (Society for Ethical Ecotourism). Bob loves his wife very much!