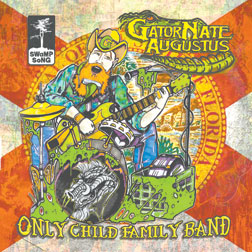 This is the newest installment of “swamp-music” by Nate Augustus. This is also the first solo release under the new moniker “Gator Nate Augustus”. It is 14 tracks of original Florida themed music, all performed by a “one-man-band”. PHOTOS BY NATE AUGUSTUS/COASTAL BREEZE NEWS

Listening to a favorite song or album can be like chatting with an old friend. It can bring back memories of when and where you were the time you first heard it. Somehow it helps you recall smells, sights and even feelings. Music can be a “pick-me-up”, like an anthem before a big game or match. It can be used to set “the mood”. It can help relieve stress. It awakens soldiers, sailors & summer campers. Lullabies put babies to sleep. It can indicate war. It helps mourners grieve for loved ones at funerals. At weddings, it lets the congregation know, “here comes the bride”. It is used to worship. It is used to heal. “One good thing about music, when it hits you, you feel no pain.” -Bob Marley-. Music can do many things, yet for most, it’s a temporary mood adjuster, an escape from the toils & spoils of everyday life.

For me, music IS everyday life, and the mood I’m in, determines the feel of the song I play. (and sometimes it’s not exactly “beautiful” music…)

Howdy Folks, this here is Nate Augustus, and I’ve been obsessed with music since early in my life. Life for me started on a hot August day in Southwest Florida, way back in 1978, at Naples Community Hospital. Alongside me in that baby ward, born only hours apart, was my future lead guitar player, Tom. For over a third of a century, we have stayed bandmates, oldest friends, and musical confidants.

Our first memorable musical endeavor was a “garage band” (that really just means crappy band) called “Honk” that began in ‘91, during our 8th grade summer. We practiced in an 8×10 storage unit on Marco Island. Of course we dreamed of being big rock icons, and we played till our fingertips bled. It was a great summer! I had my first band, wrote my first song, played my first show, and bought my first guitar. A 1989 Electric Blue Fender Telecaster, which I still play to this day. By the time 10th grade came around, our rock-n-roll dreams had turned to girls, cars and other stuff kids at 16 do. It wasn’t until I had graduated from Lely High School and relocated to the “big city” of Tallahassee with my ol’ buddy Tom, that we really began getting serious about our music.

We reformed the band, adding and subtracting members and genres until we felt confident in our product. That product was Audio Composers League. We went on to make five albums and play hundreds of shows around North Florida, making a name for ourselves regionally.

As one-fifth of the group “A.C.L.”, I also released two albums 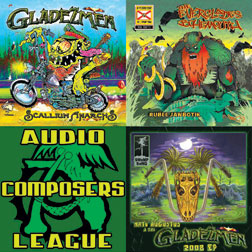 under the pseudonym, “Rubee Jawbotik”. 2004’s “Botany”, and 2006’s “Everglades Bohemouth”. They were a fusion of southern rock, blues and hip-hop, and it was during the production of those albums that the genre “swamp-hop” was born.

As a solo artist, lots of my time was spent within the confines of the studio, and in doing so was exposed to the ups and downs of professional recording. That led me to pursue a bachelor degree at Full Sail University, for sound engineering.

Of course, as I grow, my music grows, and one project led to another…until now. Always looking to scratch my creative itch, “Gator Nate & The Gladezmen” is the culmination of the best stuff I’ve made over the years…We play southern infused rock music; mixing country, blues, rockabilly, folk and even hip-hop. Mostly original songs, but there are a few ol’ classics we dig up for the live shows. Most of the songs are Southern/Florida/outdoor themed, with stories of greedy land barons, swamp monsters, moonshiners and lost loves. Living in Florida for over 30 years, quite a few swamp inspired stories have been relayed to me. Quite a few of ‘em make great songs!

As the front-man for the Gladezmen, singing’, slide guitar and harmonica is what keeps me busy. Gladezmen also include an upright bass, drums and percussion players. Come delve into Florida folklore at one of the great local venues featuring local music, such as Porky’s Last Stand, South Street/Naples, Camillia Street Grill/Everglades City, Tamiami Cigar Bar and many more! (our schedule can be found at www.Gladezmen.com)

Recently, as a side project to the Gladezmen, my “one-man-band” show (playing guitar, harmonica, drums and singing) has been keeping me busy. Under the moniker “Gator Nate Augustus”, the first solo album, called “Only Child Family Band”, has been well received. This album and all my music is available at CDBaby.com and itunes.

This column will be an exciting outlet for my musical rants and raves. That being said, I am not at all accredited to rate or review music or bands. Its just the meager opinion of a music loving “good ol’ boy”. It will cover local music, events, shows, bands and venues. Your feedback, criticism or ideas concerning this editorial are always welcome. Thanks for listenin’ in! Gator Nate over & out!

Nate Augustus is a singer/songwriter from the Marco/Naples area. His band “Gator Nate & The Gladezmen” can be seen at many local venues. He has released multiple albums on his record label “SwampSong”. For more info on Nate and his musical doings, go to www.Gladezmen.com or facebook.com/NateAugustus. His latest CD “Gator Nate Augustus-Only Child Family Band” is available on CDBaby and Itunes.