Tales from the Cape: the Lost Years 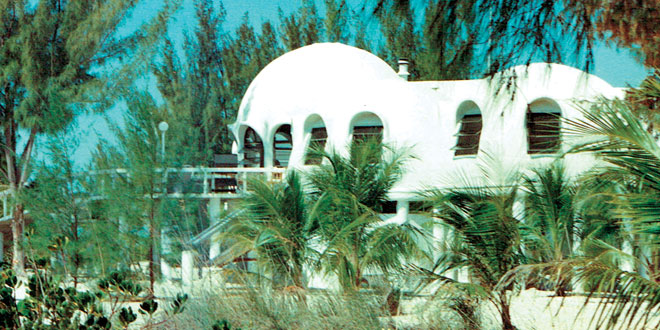 Nearly one year ago, Coastal Breeze News introduced readers to Bob Lee, the man who built the dome home at Cape Romano. His story was told through the recollections of his daughter, Janet Maples and grandson, Mike Morgan. Janet recalled the time her father first sold the dome home. It was 1989. She didn’t know what happened exactly, but only two years later, the home belonged to her father again.

Brian Slager knows what happened. Hired by George Wendell, the man who bought the home from Lee, Slager lived at the home for as long as Wendell owned it. “He was a wealthy man looking for someone to help him with his properties. He was in his 50’s and George was a real character,” Slager recalls.

pleasure. His whole reason for buying that island, as I discovered over time, was that he bought it as a business venture. The reality is that he gave Bob Lee very little money down and Bob carried the paper on it. Monte Innes couldn’t keep (the pyramid house) so George wound up buying that house, and he gave Monte a very small down payment and he carried the papers, also.”

Wendell basically wound up with the only two houses on Cape Romano and for very little money down. His true purpose was to make the island look like a millionaire’s dream escape and then take a loan on the property. But first he had to create the facade.

Slager had grown up on the east coast of Florida

his entire life. He recalls coming to Marco, Goodland and Cape Romano as a child in the 1950’s. “I was literally visiting Cape Romano when I was five years old. Of course, there were no homes on it then, but there was this sandbar just south of the Cape and we used to call it “the hump.” As a family we’d pitch tents out there and fish off the island and us little boys would run around chasing birds and looking for sea turtles.”

Slager saw the “tail end of Old Florida.” Recalling a time when there were no buildings on Marco, when Goodland was a true fishing village and where Seminoles would still dress in full traditional attire. “I feel lucky to have seen it back then,” he says. “It was much more beautiful then.”

adulthood and Slager still stayed on the east coast, ended up living in the Keys for 20 years and moved to Goodland just in time to get the job from Wendell and move on out to Cape Romano.

“He had me living there and I basically staged it without realizing it,” says Slager. During his stay, Slager built a new dock, installed a huge satellite dish, improved the electrical system – which was mainly solar – by using batteries and generators.

Wendell bought four boats to which Slager had unlimited access. Slager hired a friend, also named Brian, to help with the work. He was a large man and looked as if he could be Slager’s bodyguard. On top of that, Wendell had them purchase $20,000 worth of guns to keep on Cape Romano in case of robbers or vandals. “I had an

At left, George Wendell bought the finest equipment for Brian to work with, including a beach comber to smooththe sand.

expense account, a salary; I call them my Magnum P.I. years,” he laughs. “The people in Goodland didn’t know what to think of us!”

Naturally, stories were passed around about what they were “really doing” out on Cape Romano. Further speculation came when Wendell made Slager install “No Trespassing” signs along the Cape’s high tide line. This was about 300 yards from the homes at the time, according to Slager. Locals were upset they could no longer use the Cape, but this all catered to Wendell’s ultimate goal.

Wendell, who Slager described as miserable, only spent two and a half weeks there and had no use for its beauty, serenity, wildlife, fishing, boating or star-filled skies. Slager was paid to experience all these things and he didn’t take it for granted. 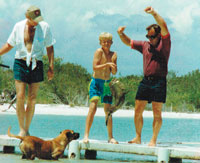 Brian helps a friend’s son pull up a triple tail from the dock. Jake the dog looks on with excitement.

– these were the biggest perks of the job. But the panther story tops them all.

Brian, “the bodyguard,” had a dog Jake who lived out on the island, too. “One night we heard this weird shrill screaming noise, and we heard Jake going nuts. I had never heard anything like that noise before. We had a pine-tree lined roadway that led down to the dock on the south end of the island. We grabbed a few guns, not knowing what was going on and we ran down the tree line. We saw that Jake was barking up a tree. And as we got close, we saw that there was a Florida panther in the tree. The panther saw us coming and leaped out of the tree and hauled a…!”

Jake ran after the panther, chasing it through

Brian had four boats at his disposal, including his own. No one knew what to think of his sudden luxurious lifestyle.

mud and muck, through the mangroves until he was so far his barking was out of ear shot. Jake didn’t come home that night. But, “the next morning he just showed right back up, tail wagging,” claims Slager. “Even though I’ve been in South Florida all my life, I had never known that a panther would swim to an offshore island like that so I was shocked to see it. But I saw one. As God is my witness, there was a Florida panther at the tip of Cape Romano one night.”

Slager’s experience on Cape Romano and living in the dome home was “the best time of my life. It was wonderful.” But all good things must come to an end.

Slager gave Wendell the perfect staged island retreat he was looking for, and the bank agreed. Wendell

It wasn’t all work. Fishing and fun adventures were common in the 2 1/2 years Brian spent on Cape Romano. According to Brian, it was about 300 yards of beach – or the size of three football fields – from the homes to the water.

received a $2 million loan on the property and soon stopped paying Bob Lee and Monte Innes for the homes, according to Slager. With the deeds still in their names, the properties went back to them.

According to Judy Innes (Monte’s ex-wife), from a past Coastal Breeze article about her time in the pyramid house, a tornado came through and destroyed it not long after a new buyer took it over.

Slager stayed in the dome home and kept it up per Bob Lee’s request until it went through the foreclosure process.

Perhaps no one spent more time living on Cape Romano and in the dome home than Brian Slager, and he made good use of it. “I basically got to live for free in this amazing place that these two wealthy and creative men made. I guess in some respect, I owned the island for a short while.”

2 responses to “Tales from the Cape: the Lost Years”