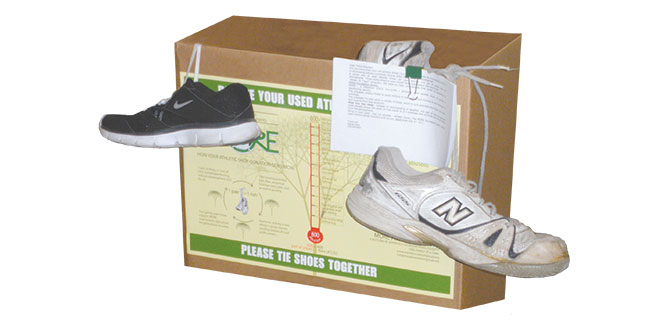 The Greater Marco Family YMCA is taking part in an effort to boost the economic fortunes of the impoverished in Africa’s developing nations while also combating global warming.

“Shoes To Trees” takes donations of new and gently used athletic shoes collected at U.S. YMCAs and ships them to the program’s creator, the Modular Organic Regenerative Environments Foundation, a Delaware-based nonprofit. MORE provides the shoes to vendors in Africa and proceeds from their sales go to that continent’s YMCAs to pay for seeds, tools and training for “Shoes to Trees” participants.

Each donated pair of shoes equates to 10 tree seeds and trees are known to absorb carbon dioxide, which contributes to global warming, and they also emit oxygen into the atmosphere.

At the Marco Y, the program is being spearheaded by Jayme Lowe, who joined the organization’s board of directors about six weeks ago. She replaced her husband, Scott Lowe, CEO of Physicians Regional Healthcare System, who resigned in December after assuming that

Two youths display one of the trees planted on their family farm through the “Shoes To Trees” program. SUBMITTED PHOTO

The Lowes reside on Marco Island.

“I’m on the board to help,” said Jayme Lowe, who learned about “Shoes To Trees” at her first board meeting and offered to head up the project on Marco. “I’m on the board to volunteer. It was something they needed help with and it’s a good place to start. Anything that helps the Y is a good thing.”

She said the YMCA played an integral role in her life during her youth in rural Virginia, providing an outlet for exercise and studying gymnastics, which she did for eight years.

“It was a big part of growing up and building confidence, and building a healthy outlook on life,” said Jayme Lowe.

The shoes should be adult sizes 6 through 12 and donation boxes can be found at the Y. Jayme Lowe is also seeking local businesses that are willing to place the boxes in their establishments. 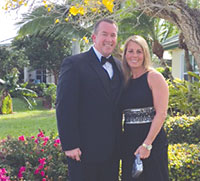 Scott Lowe, CEO of Physicians Regional Healthcare System, and his wife Jayme, of the board of directors of the Greater Marco Family YMCA.

from ending up in U.S. landfills, which is in line with the MORE Foundation’s goal of promoting global efforts to reuse and recycle.

The foundation also educates the small farmers who grow the trees in its MORE Farming System, which promotes conservation of natural habitat, alternative energy sources, and sustainable farming and livestock-raising techniques. The goal is to enable the farmers to prosper on the same acreage each year, rather than engaging in slash-and-burn practices to create arable land in the countryside.

Jayme Lowe is confident Marco Islanders will step up to aid “Shoes To Trees.”

“Even though we’re a small island, there are a lot of people on this island who are willing to give of their time and effort,” she said. “What easier way to help a great cause than to go into your closet and do some spring cleaning, and take out your gently used athletic and soccer shoes to benefit the cause of YMCAs all over the world, and reach people that truly need it.”